The much belated V-Day post: my new favorite roll cookie recipe and an experiment with Royal Icing 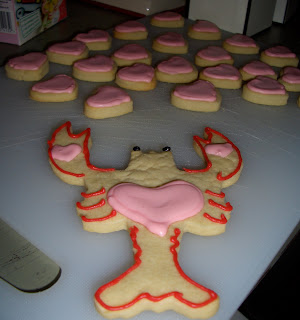 Valentine's Day was a little tough this year.  It seems ungrateful to say it, but I actually think things were too good in my relationship; our expectations of romance were unrealistically high, given that I had put the kibbosh on anything over-the-top.

We booked in for lunch at an Italian restaurant in our neighborhood that got glowing reviews on Toptable.  We figured Italian is hard to screw up too much, and the decor seemed romantic from the photos we'd seen online.  Oh boy, were we wrong.  The food was bad: blandly cooked, with really weird attempts to add flavor after the fact (like steak with parmesan shavings and a strawberry 'salsa' on top of my swordfish carpaccio.  Just NO).  The service was pleasant, but overly twitchy and watching us the whole time (made extra uncomfortable by how bad the food was).  And worst of all, the atmosphere was just not valentinesy.  Not even in a forced way.  There were 2 tables with babies/toddlers, another large group of raucus mid-lifers, and a few other couples who seemed to be as nonplussed as we were.
In short, it was disappointing.  And expensive.  We tried to laugh about it, and were successful for most of the meal, but by the time we got back out onto the street, in the rain, I was losing my chin-up attitude.  Luckily, the bf knew exactly what to do.  He steered me, hobbling from a grape-sized blister (damn you, walking-cities!), into the awesome kitchen store up the road, and encouraged me to buy cookie cutters.  I'd been ogling them, all of them, for months, but I thought it was a silly expense.  But now I gave in to temptation and allowed myself to buy two differently sized hearts, a lobster (because who can resist?), and a set of safari animals.  Freaking AWESOME: 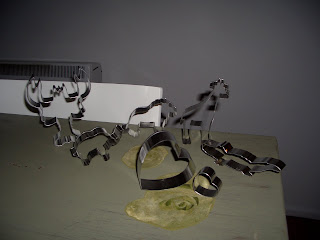 On the day, I was too tired to deal with the effort of actually making the cookies, but we snuggled up on the couch and had mac and cheese (imported from the US) and watched Sixteen Candles and found our romance again.  And on Monday, the day after V-Day, I got cracking on putting my new friends to good use.
I opened my Joy of Cooking and found the recipe for Rich Roll Cookies.  I chose it over the normal roll cookies because it seemed easier.  And boy, was it!  In stark contrast to my previous butter cookie attempt, this one came out perfectly.  Amazing!  Within 20 minutes the little packages of dough were chilling obediently in the fridge: 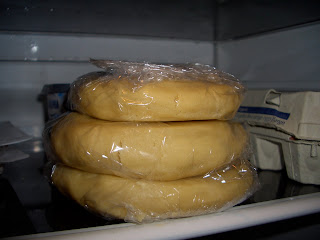 Once the dough had chilled, it was pretty easy to roll out and cut up (even using an old cider bottle as a rolling pin, on our dining room table, which is the only large enough space in our flat).  How adorable are those cookies?? 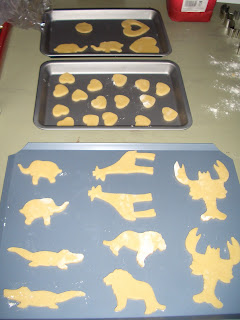 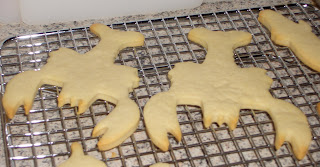 I even made ONE pretty Linzer for my honey.  It was V-day (or re-v-day), after all: 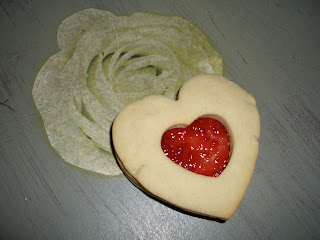 And I made about a million little teeny heart cookies to bring into class.  Because I still haven't grown out of that middle-school, princess cardboard valentines phase: 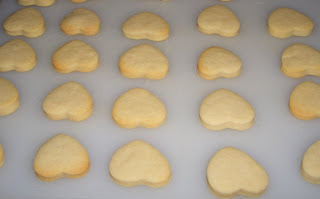 And then came the hard part: royal icing.  I'd done my research on how to decorate with this tricky-ish stuff, and I knew the basic steps.  And luckily I had my mixer with the whisk attachment, so it was pretty easy to whip it up.  The tough part was the piping, which I did with a ziploc baggie.  I reinforced the corner of the bag with tape, then snipped off a teeny piece of the corner, and used that to pipe (the tape is a little trick I learned from Hello Cupcake).  It does the trick, but obviously it's much more difficult to control than a legit icing bag, and so the lines ended up a bit wonky: 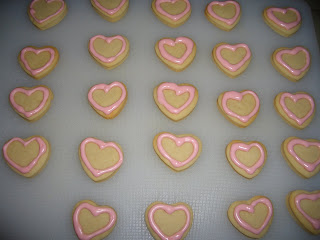 The flooding was also tricky, mostly because it's tough to know exactly how much icing to use, and some of the cookies overflowed a bit.  But in the end they turned out alright: 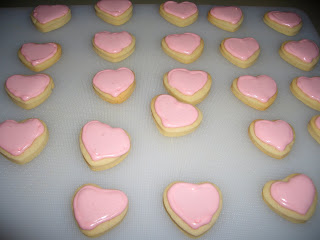 My classmates were impressed, which is the important part.  Oh, and they tasted divine.  As in, dangerous to have around.  The little hearts especially, since they're so easy to just pop into your mouth!  The lobsters were a little safer, because they're so cute you feel bad eating them: 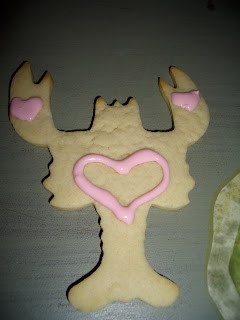 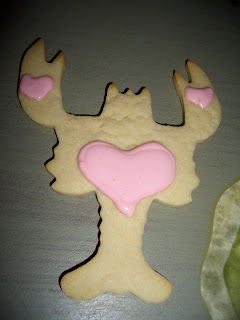 After the show cookies were done and I'd gotten the hang of royal icing a bit better, the bf came over to join me in a bit of fun decorating the animals.  I set out bowls of different colors and we combined royal with gel icing and toothpicks, and just generally went at it with wild abandon: 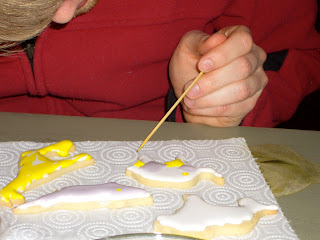 The bf's cookies turned out pretty awesome, I think: 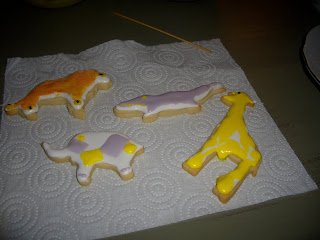 And mine weren't too shabby either (a bit more meticulous...)! 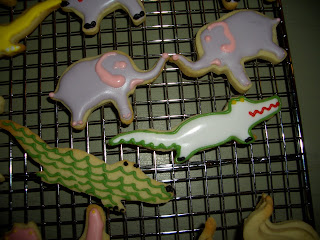 These guys are my faves, I think:

The final product was a tray of adorably delicious cookies and a tired but childishl happy couple!  It could certainly be worse, eh? 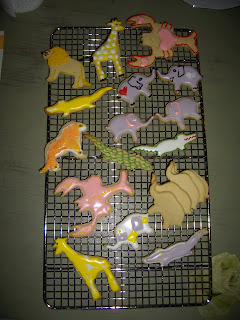 Rich Roll Cookies, from Joy of Cooking
These cookies are really easy to make and work with, and they taste really good, subtly buttery, without being too sweet to allow for the sugary frosting on top.  The combo is beyond dangerous!
Beat in a large bowl until creamy:
1 cup (225 g) unsalted butter, softened
2/3 cup sugar
Add and beat until combined:
1 large egg
1/4 tsp baking powder
1/4 tsp salt
1 1/2 tsp vanilla or almond extract
Stir in until blended:
2 1/2 cups all-purpose flour
Divide the dough into thirds or quarters, shape into disks, and wrap in plastic.  Refrigerate until firm enough to roll.  Preheat the oven to 350 F (175 C).  Grease or line 2 cookie sheets.
Working with one portion of dough at a time, roll out to 1/4" thick.  Cut out cookies and arrange about 1" apart on baking sheets.  Reroll and cut the scraps.
Bake, one sheet at a time, until cookies are lightly colored on top and slightly darker at the edges, 10-12 minutes for 2-3" cookies.  Let stand briefly, then remove to a rack to cool.  If desired, decorate with Royal Icing.


Royal Icing, from Joy of Cooking
I used a box of royal icing mix, which you beat with the required amount of water.  In case you want to make it from scratch, here's the recipe I would have used.

This icing will become very hard.  To avoid the naturally grayish tone that develops during preparation, add to portions that you want to keep white a slight amount of blue vegetable coloring.  Do not use blue in any icing that you plan to color yellow, orange, or any other pale, warm tint.

Sift:
1/8 tsp cream of tartar
3 1/2 cups confectioners sugar
Beat until stiff, but not dry:
2 large egg whites at rm temp
Gradually add the sifted sugar and:
2 tbsp lemon juice
until it is of good consistency to spread.  Cover with a damp cloth until ready to use.
Posted by Anne at 09:14