Pin It My sister and I have always shared a love for crafts and Martha-Stewart-y activities, but the difference between us is that she actually plans (and pays for) said activities. Usually all I have to do is show up. It's one of the things I like best about her.

Now that she has a three-year-old son, she's more nutso than ever about this stuff; she pretends it's for him, but we all know better. The other weekend we found ourselves in the same place at the same time, which is unusual for us, and I agreed to do some cupcake baking/decorating. She had bought this book: 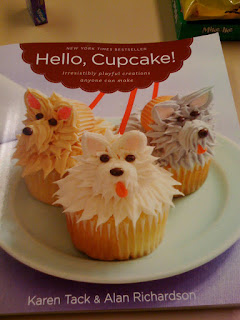 At first glance, I assumed we'd fail miserably to re-create any of the decorations pictured in the book, but the author promised that all the cupcakes can be re-created by anybody, without special tools (just plastic baggies, canned frosting, and a lot of strange props). So we gave it a whirl.

I chose to try the sunflowers, which, in the book's big, beautiful photos, look garden-fresh. The first one was a little odd– I put the petals on sideways (rotated 90 degrees), so the flower looked like a flower, only... not. But once I corrected that little issue, the rest came out beautifully! In fifteen minutes (honestly, really quickly) I had my own little plate of sunflowers and my nephew, who had poo-poo-ed the 'boring' flowers was harassing me about how he wanted one! Judge for yourself (The sideways one is in the foreground): 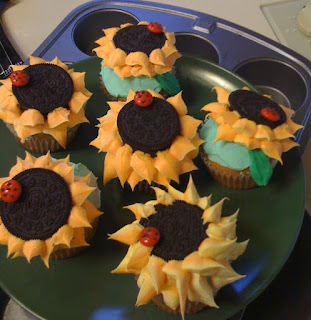 While I was gardening, my sister was working on penguins, which involve a microwaved can of frosting, donut holes 'built' upon cupcakes, precarious dipping and strange candy attachments. At first, I was doubtful: 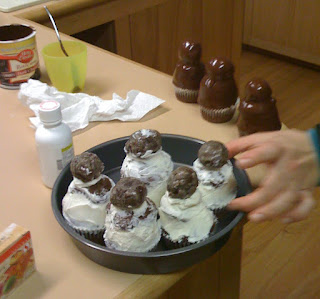 But as she dipped... 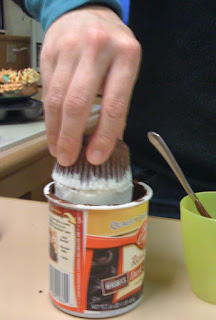 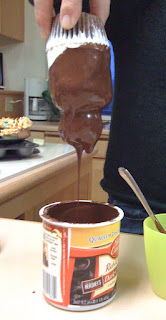 Once the marshmallow bellies and chocolate wafer wings were on, they were starting to look like birds, and when westuck on the starburst beaks I started to get excited: 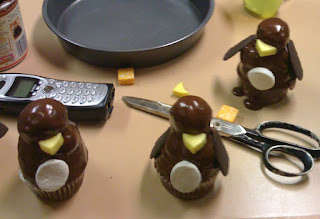 Of course, there were a few deformed casualties... 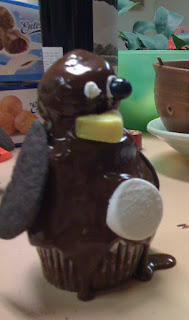 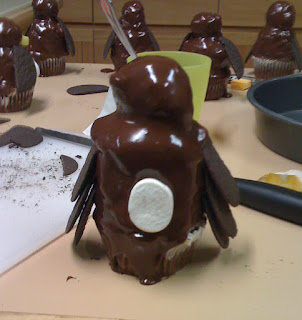 But in the end, they made a pretty cute little pack! 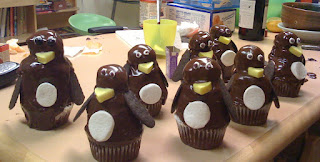 So overall, I was definitely impressed. The cupcakes were easier than I expected, although some were more edible than others (starbust + donut hole + marshmallow = ew), and the decorations impressed everybody we showed. Plus, there's nothing more fun than watching your sister practically pee herself on the kitchen floor when her mutant penguin falls cockeyed into the muffin tin. Well, to be fair, it was like 10 pm and my nephew was on sugar-crack and sleep-deprived and the kitchen was a mess of candy and frosting and deformed birds.

Bottom line: I highly recommend this book if you like decorating cupcakes or you donate to bake sales a lot and want people to ooh and ah.
Posted by Anne at 21:52