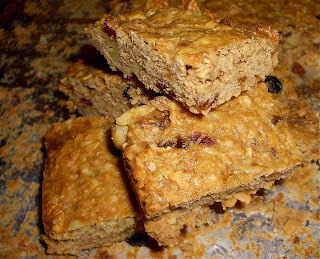 I think I've mentioned before that I'm studying for my MA, but I'm not sure I've told you the classes go from 6-9 in the evening.  Now, I don't usually mind having class at night, as long as it's interesting (which these generally are, unlike my night Spanish class at undergrad– GAH), but my stomach does get a bit cranky about the disruption of my usual mealtime.  Aaaaand one of the ways I tend to stay focused on important things like writing essays and discussing literature is to mindlessly eat anything in front of me.

Which is fine as long as what's in front of me isn't candy, soda, and bacon- or prawn-flavored 'crisps' (yes, they exist, and no, they're unfortunately not as disgusting as they sound).  Which, of course, is exactly what's on offer when the cafe is closed (after 6:30pm).

So last week I went on a hunt for a packable snack that wouldn't make me feel like a hideous glutton for three hours, twice a week (have I mentioned my book is about weight loss?  HA), and I decided to try my hand at homemade granola bars.  The packaged ones are generally a bit sweet for my taste, not to mention too crinkly to fiddle around with while someone is talking.

I found a few recipes, wrote down some basic guidelines, and bought some fancy dried berries, and then on Wednesday I got to work.  Well, I say 'work', but in fact these were so fast and easy to make that I didn't even have a chance to snap a photo before they were on the baking sheet! 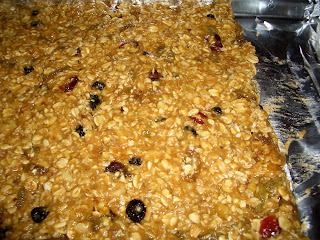 And once they were in the oven, I had just about enough time to read a chapter of Obama's first book (for class, but should be required reading for all proud ex-pats) before they were wafting delicious oaty breezes through the flat.  Soon enough, they were ready: 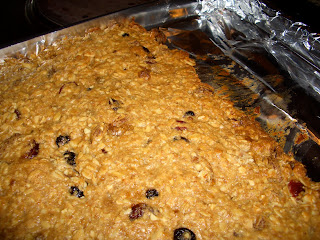 Then all that remained was to let them cool and slice em up: 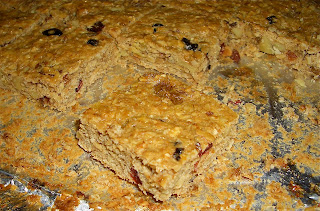 Okay, they're not particularly photogenic, but they are quite tasty.  And I think maybe if I'd been a little more serious about this particular project, and actually bought wheat germ, they might have been a little crunchier.  But I'll never buy wheat germ.  Because that's dumb when you live somewhere with limited kitchen space.  Unless there's a really wacky, adorable project that I just can't resist that involves wheat germ...  Well I'll not say 'never,' but I won't cross that bridge until I come to it.  For now, I think I'll just plan to use less flour and more oats next time for a less cakey texture.

In the meantime, though, just look how cute my little packaged snacks are! 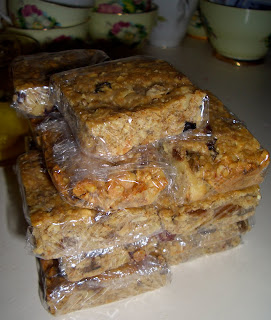 All set for class!  Now if only I could actually write some of that infernal book...

Granola Bars:
Recipe adapted from this one and this one on Allrecipes.com:
Preheat oven to 350F (175C).
Throw together:
2 cups oats
1 cup flour
1/2 cup brown sugar
1 cup dried fruit (I used mixed berries, but raisins or cherries or apricots or pretty much anything would work here)
1/2 cup wheat germ (I didn't have it and couldn't be bothered to get it, so I threw in some wholemeal bread flour and some flaked almonds, and my bars turned out great, if a bit dense)
1 teaspoon cinnamon
1/2 cup chopped walnuts (or any other nut you're in the mood for)
Blend, then add to dry mixture:
1/2 cup vegetable oil
1/2 cup honey
1 egg
2 teaspoons vanilla
Press the mixture into a lined (foil works well, as would parchment I'm sure) 9x13 pan.*  Bake in preheated oven for 25-30 minutes, until the edges are golden brown.  Let the bars cool completely before cutting them.
Wrap individual bars in cling film for a grab-and-go snack!  Apparently they also freeze well, but I doubt I'll get a chance to test that theory, at the rate I'm devouring them.  They're still healthy if you eat 13 in a day, right?
*One of the things I like best about this recipe is that you don't really have to have the exact right pan.  As you can see from the photos, I used a large sheet pan that was too big for the bars, but because the dough (batter?  gloop?) holds its shape so well, I just basically shaped it into a rectangle and cooked it that way.  The edges got a bit brown, but I like the crunchier bits so that didn't bother me.  Alternatively, if you prefer a thicker bar, just use a smaller pan and cook a little longer.  This recipe is all about experimentation!
Posted by Anne at 07:13