How much more could I POSSIBLY love bread?! 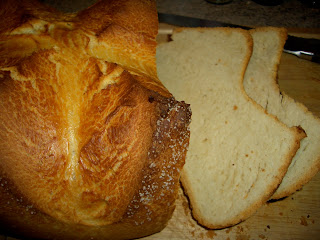 Tons more, as it turns out.  Who knew that making bread myself would make it taste that much sweeter?  Or, saltier, if we're talking about my sea-salt-crusted preference.  Anyway, I'm sure it has less to do with the hard work than with the delectable smell of baking bread, which makes my stomach growl and my boyfriend harass until the loaf comes out of the oven and we inevitably ignore the instruction to let it cool completely before slicing.  Whether we're missing out on something by slicing too early, I'll never know, because I doubt we'll ever be able to wait to break open a loaf like this: 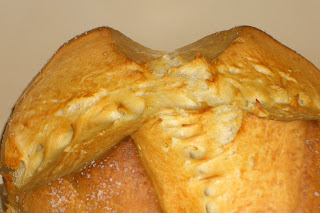 First of all, though, I must give credit where credit is due; I would never have known about this easy, unbelievably tasty recipe if not for the Pioneer Woman.  If you haven't been to her blog yet, GO.  Seriously, she is way beyond deserving of her massive following.  But perhaps more credit is due to her friend Ryan, who is a frequent guest cook/blogger on her site and one of very few very religious people I've taken a huge shine to in my life (HI BRITTANY!).  I'm agnostic, and generally indecisive, so extreme faith in anything makes me uncomfortable.

Anyway, Ryan is responsible for the recipe, and PW is responsible for getting the word out, and to both of them I owe a massive debt of gratitude, because this bread is seriously good.  As in, so good the bf and I ate the entire first loaf, which was even a bit undercooked in the very middle, within two days.  And the second loaf (the one in the first pic), within 36 hours.  I kid you not.  Yes, I am quite pudgy these days.  Shut up.

Here's the recipe in a sort of step-by-step with pics (see?  Indecisive.  Expect more of this flipflopping on post layouts and structure in the future.  Don't say I didn't warn you): 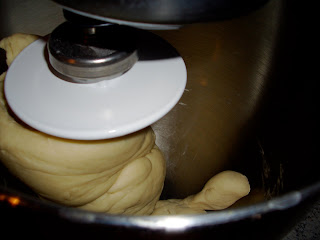 Mix 4 cups of bread flour (you can use all-purpose but it won't be quite as fluffy), 1 cup warm water, 8 Tbsp (113 g) melted butter mixed with the herb of your choice (I used rosemary bc it's what we had), 2 tsp salt, and 1 tsp active dry yeast (best to mix this and the water first and wait for it to foam, just to be sure it's aliiiiive) in the bowl of a stand mixer or by hand in a large bowl.  Mix or knead until the dough windowpanes (I love my new bread-lingo.  This one means it can be stretched until light shines through, without the dough tearing), about 10 minutes in a mixer, and longer by hand. 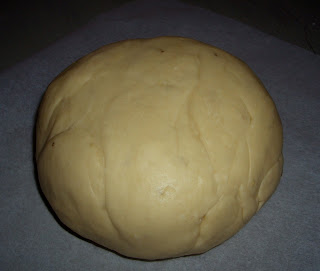 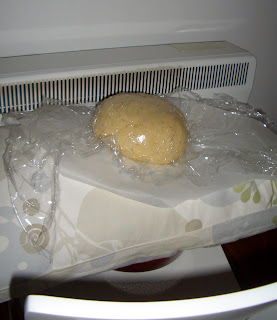 Leave the dough out in a warm place for 1-4 hours, covered in plastic wrap.  It should double in size.  If your apartment is freezing, like ours, simply throw together a little booster-seat / nest by the radiator!
3. 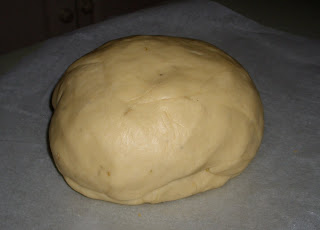 Once the dough has risen, knead for a couple of minutes to redistribute the yeast and preheat oven to 425 F (218 C).  FYI: If you care about your Le Creuset fancypants casserole dish, like the bf and I do, you should remove the black handle from the top before putting it into the hot oven.  Apparently that piece can't handle heat above 200C. 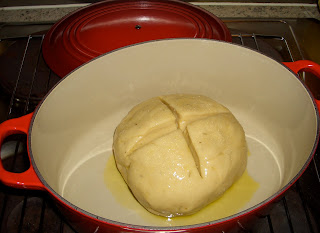 Slather the sucker in olive oil, plop it into a cast-iron casserole dish / dutch oven / what have you, then sprinkle liberally with sea salt.  Cut a big, deep X in the top to allow the bread to expand as it bakes. 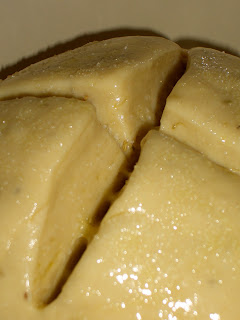 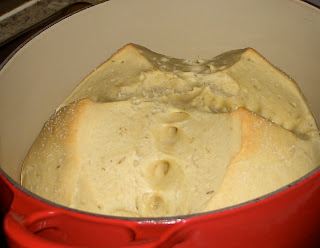 Bake for 30 minutes with the lid on (the pic above is the halfway point), then awkwardly remove the lid (which has no handle if you care about your expensive kitchen equipment!) and stick the bread back into the oven for 15-30 more minutes.  We baked the first loaf for 15 in this round, and it was a little heavy in the middle, but still delish.  The second time around we did 25 and it came out perfectly.  I think it probably depends on your oven and how crusty/doughy you like your bread. 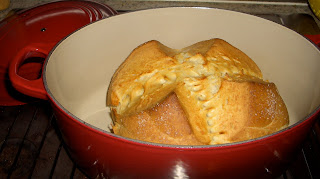 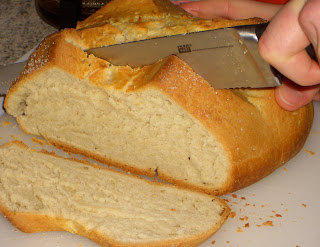 Wait for the bread to cool before slicing it.  OR slice it as soon as you can bear to touch it, then eat it piping hot and slathered with goat cheese!  YUM!
Posted by Anne at 06:39