Homemade potato chips, or: How you know you're truly a master procrastinator! 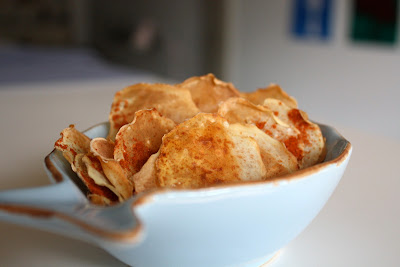 In case you haven't noticed, I'm kind of controlled by my cravings.  That's one of the dangers of being both anti-dieting and home all day.  You end up making all kinds of random things in pursuit of a craving. 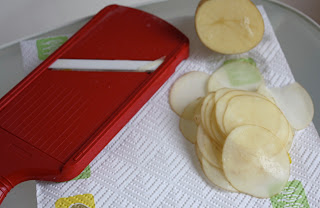 Well... in pursuit of a craving while also trying to outrun a deadline.  Yeah, yeah, I was supposed to be writing my book.  But I needed salty crunch!  Don't judge me. 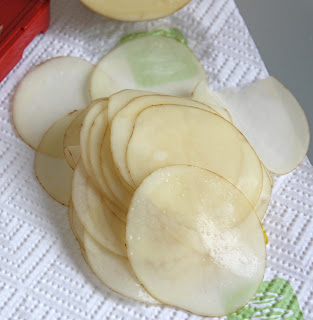 Anyway, there's not much to say about these homemade potato chips, except that I did eventually go out and buy a pack of Pringles to satisfy my crunch craving.  These little homemade guys just didn't hit the spot.  That's not to say that they weren't tasty, but they tasted like potato, rather than obesity, and that just didn't cut it. 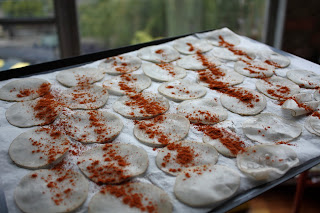 The good news, though, is that if you happen to luuuuuuurve paprika potato chips and can't seem to find them in the UK (and therefore pack illicit, contraband bags of Lay's in your suitcase when you fly home from Amsterdam), you can make them yourself!  Except they don't really taste the same... 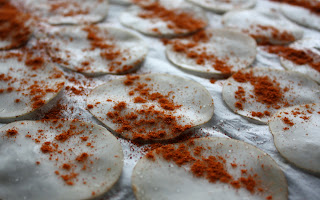 But they're not half bad, really!  They're just crispy rather than crunchy, and lacking that satisfying MSG goodness that the packaged stuff promises.  The trade-off, though, is that they're prety damn healthy, and super easy.  And did I mention that they make a great procrastinating technique?  Yeah... 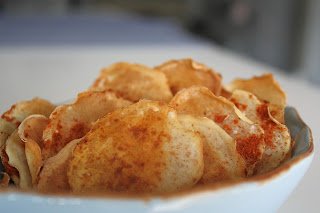 Anyway, in case you have an essay due or you're really trying to stay off the processed foods, here's the original, microwave recipe.  I made them in the oven, because all our plates are rimmed with metal, which means we can only microwave in tupperwares.  But our plates are pretty!  If you find yourself in a similar form-over-function dilemma, my method is below.  Happy (healthy) crisping!  And if you're in Angel, could you possibly bring by another can of Pringles?  Mine seem to have disappeared... 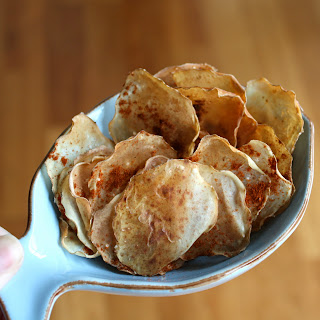 Homemade Potato Chips:
Preheat oven to 350F/175C.
With a mandolin, or an extremely steady hand and a sharp knife, slice a potato into paper-thin chips.  Line a baking sheet with parchment paper, and lay out as many slices as you can fit, then sprinkle them with salt and/or any other toppings you fancy.  Bake for 15 minutes or until browned (if they're not browned, they won't cool crisp).  Repeat until you've used up the whole potato or you get bored.
Posted by Anne at 23:15