A Genius Among Us: Joy's No-Roll Pie Crust 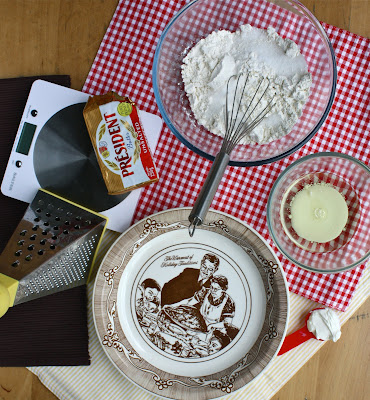 I'm sure you all know Joy the Baker by now, yes?  She's the adorably quirky baker/blogger/muser-on-life who brought us such gems as sunflower seed bread, chocolate peanut butter puffs, and these lemon meringue cookies, which I'm dying to try once I don't feel too lazy / I buy a pastry bag.  Basically, she's kind of a genius, as well as being so creative it actually makes me sleepy just to read her blog.

But sometimes her creativity energizes me, because it encourages my laziness.  Enter the no-roll pie crust.  This dough doesn't require a lot of work (amazingness, especially for a pie dough); it mostly involves grating frozen butter, manhandling the dough a bit, and lots of greasy fingers.  Have you ever grated butter?  It's kind of weird, but also kind of ingenious.  And more than kind of pretty: 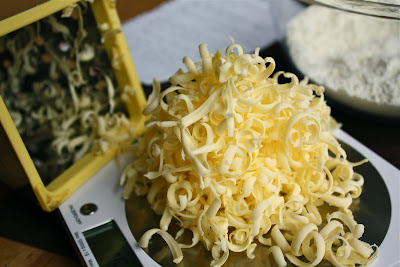 Now, I've always been told that the less you touch pastry, the better (hence the infuriating number of 'perfect pie dough' recipes that involve a food processor, which of course I don't have).  So the idea of using your hands as one of the main tools made me a bit wary, but I gave it a shot anyway, because I really didn't feel like doing the whole rolling-out shebang again.  Besides, I figured if it worked, I could make pie in the future without having a total spaz-out about the crust and eventually giving up and resorting to cookies or muffins again. And, to my surprise, it worked!  The dough came together just as Joy said it should, and I used it for a lemon cream pie, and even though I didn't pre-bake it exactly perfectly it was still quite tasty!  I was, as they say here in East London, well chuffed.  All the handling didn't make it tough – it was tender and flaky but it held the pie filling perfectly.

This recipe has so much going for it: it's easy, it's fast, and best of all it doesn't require a work surface, which I always appreciate because the grooves in our wooden dining table are probably so filled with old bits of pastry by now that no amount of bleach could ever make that poor table hygienic again.  All it requires are the ingredients, a bowl, a box grater (and I bet you could even use a regular cheese grater and a bowl), a  fork, and your hands.  Oh, and a pie dish, of course! 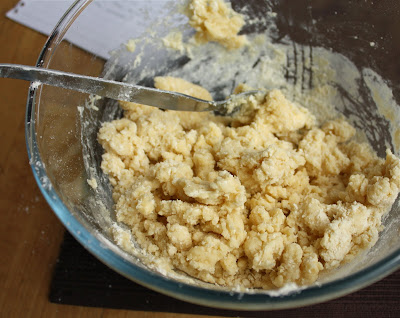 And, as a bonus, it doesn't leave nearly as much of a mess as the usual rolling out debacle. 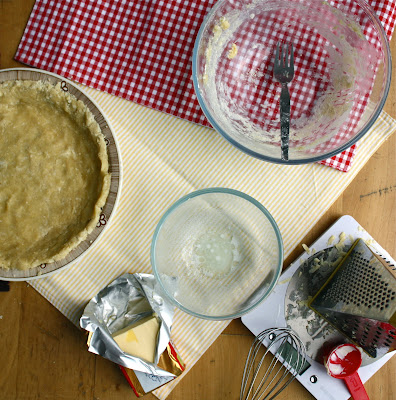 The only problem I had was the blind-baking...The crust just did not seem to want to turn golden.  Instead, it kinda went shiny with butter, and I was really worried it would lose its shape and slide into a puddle of grease in the middle of the plate.  So I erred on the side of undercooking it a bit, which turned out to be fine with the pie I used it for.  And after I pressed down the puffiness and let it cool on the counter, then wrapped it well and refrigerated it overnight, it was in perfect shape to be filled the following day.

So is it a genius recipe?  Yes.  Yes, yes, a thousand times yes.  This one is definitely going into the physical recipe box – and you know I don't hand-write those pretty little index cards for just any recipe! 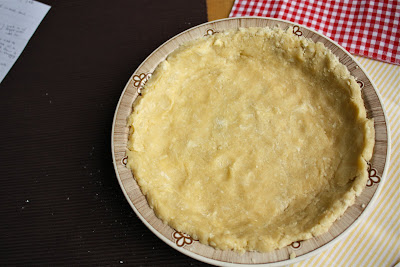 No-Roll Pie Crust:
by Joy the Baker
In a medium bowl, whisk together:
1 1/2 c flour
3/4 tsp salt
2 Tbsp sugar
1/8 tsp baking powder
With your fingers, work in:
1/4 c (57g) frozen butter, grated
1 Tbsp plain cream cheese, room temp
In a small bowl, whisk together:
1/4 c oil
2 Tbsp cold milk
Add the liquid to the larger bowl and mix with a fork until all the floury bits are wet.  It will be shaggy – that's okay.
Dump the dough into a pie dish and press it into the bottom and sides of the dish.  Try to get it as even as possible.  Freeze the dough in the dish while you prepare the filling, or for at least one hour before blind baking.
To blind bake, set the oven to 350F/175C and line the dough with foil.  Weigh the foil down with baking beans or uncooked rice (don't eat the rice afterwards) and bake for 10 minutes.  Remove the foil and weights and bake for a further 4-6 minutes uncovered, until golden brown.
Posted by Anne at 06:03