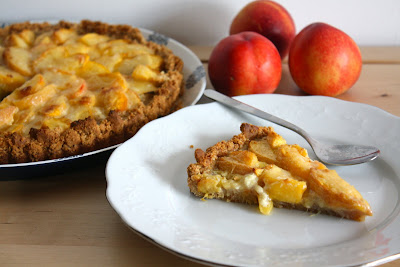 It was supposed to be a lazy Sunday afternoon.  We'd had lunch at one of our favorite London restaurants (to celebrate my first full draft of my manuscript!), followed by a windy wander through Bermondsey, and the plan was to go home and relax / work.  But then I was struck with an unrelenting desire to bake a peach tart.

Admittedly, the desire began a couple of days before, when I was watching Come Dine With Me and one of the contestants made a peach and nectarine tart.  We didn't have the fruit on hand, so I filed it away for another day, but then we walked past an M&S on the way back from lunch and I decided to do it that day.  In a hurry.  Without a recipe... which kind of led to a semifail.  Let's go through it one part at a time.

The crust: full-on fail.  In my haste to catch the waning light, and my laziness about making pastry from scratch two weekends in a row, I threw together a biscuit base, with a third of the biscuits swapped out for ground almonds.  I felt like a genius: almond flavor, a nice crunchy crust, and I didn't have to deal with finicky pastry! 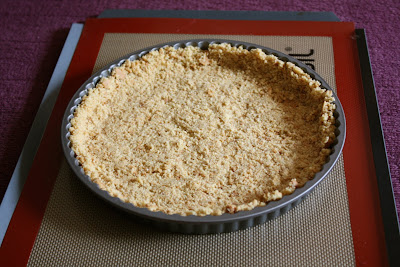 BUT:  the crust was not water-tight – it was not even crust-tight.  What I ended up with was crumbly and soggy at the same time.  Fail.

Peeling and slicing the peaches (and a nectarine, for kicks): semifail.  They were nicely blanched, but I should have sliced and de-pitted them first!  I mangled a lot of peach flesh and made a big slippery mess trying to get the slices off the pit without any skin to grip. 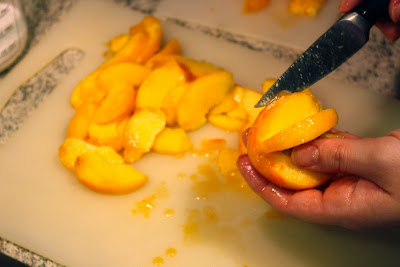 Assembly: relatively successful.  I managed to get a pretty peach spiral going despite my imperfect slices, and the custard came out pretty well, but then half of it soaked into the crust before I could even get the thing in the oven.  So, yeah... not ideal, but not god-awful. 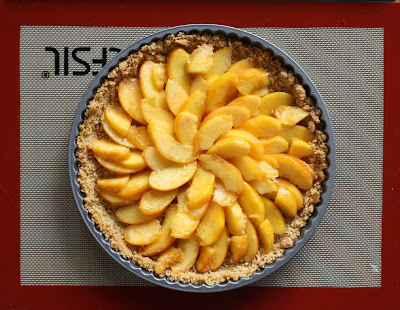 The end product: not half bad, all things considered!  The peaches were sweet and tangy, and just perfectly soft.  The custard was rich and sweet without overpowering the fruit.  Even the crust had a nice flavor to it, despite its issues with texture. 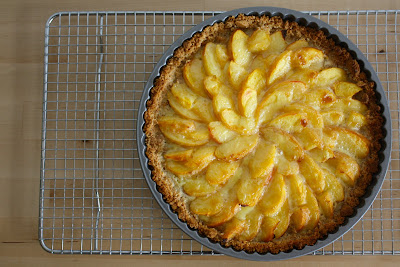 All in all, I'll definitely be trying this one again.  But I'll slice the peaches in half and remove the pits before I blanch them, and I'll use a legit tart crust (so I'll start a lot earlier).  The important thing to remember about this experiment?  Peaches are amazing (how do I forget that every winter?) and failure doesn't always taste bad.  We ate the whole thing between the two of us, so I must have done something right! 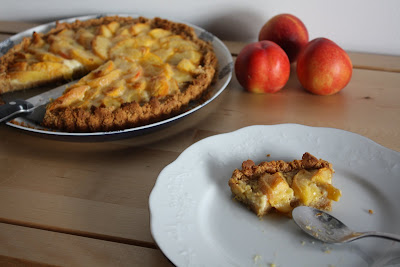 Thrown-Together Peach Tart (The Right Way)
Liberally adapted from Sweet Tarte
Preheat the oven to 375F/190C.  Line a loose-bottom tart pan with a legit tart crust (don't be like me!  Next time I'll try this one) and poke the bottom of the crust with the tines of a fork.  Line the crust with foil and fill with baking beans, then bake for 20-25 minutes.  Allow to cool while you prepare the filling.
Raise the oven temp to 425F/220C.  Halve and de-pit:
4 peaches (or a mix of peaches and nectarines)
Boil a kettleful of water and pour into a large bowl.  Carefully place the fruit in the water for ten or fifteen seconds, then scoop them out with a spoon and put them into a bowl of ice-water.  The skins should slide right off.  Slice the peaches lengthwise into pretty crescents, and arrange in a spiral on the cooled crust.
For the custard, whisk together in a pitcher:
1/2 c heavy cream
1 large egg
1/4 c sugar
1/8 tsp almond extract
Tap the pitcher on the counter to get out the air bubbles, and then pour the custard over the peaches.
Bake in the preheated oven for ten minutes, then turn down the heat to 375F/190C and bake for another 15-20 minutes, until crust is golden brown and filling is set. 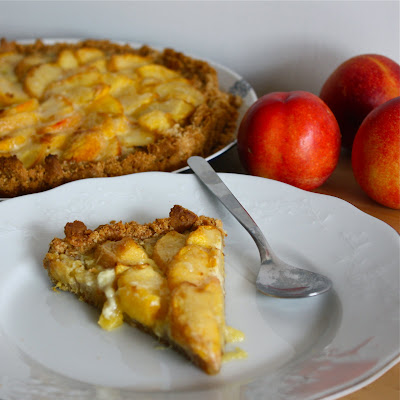