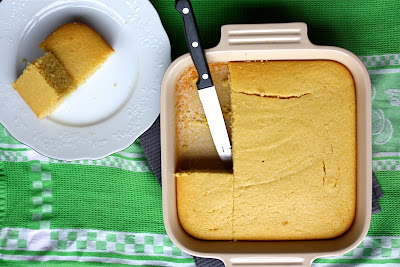 Last weekend, I found myself with leftover buttermilk.  Again.  You see, it was Pancake Day a couple of weeks ago, and over here in the UK they take their food-related holidays extremely seriously.  I didn't even know what Pancake Day was until I moved here, but I kid you not, by Tuesday morning all the stores I checked (about 5) were out of maple syrup– that's how serious they are.  Anyway. any holiday about eating something delicious, especially if it involves breakfast for dinner, is a holiday I'm on board with, so we bought buttermilk and whipped up some tasty buttermilk pancakes.  But alas, we only used about 1/3 of the carton.  What to do?* 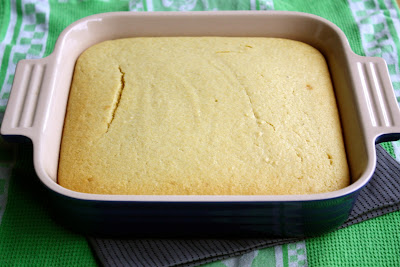 Well, as I'm sure is obvious from the title and the photos, I decided to make cornbread!  Now, I'd always assumed that most of the Western world was familiar with the gloriousness that is cornbread, but apparently the Brits don't know a thing about it!  (Travel really does teach you new things, eh?)  In fact, when I first introduced the bf to the sweet, buttery deliciousness of cornbread when he visited me for the first time, he took one bite and his eyes rolled back in his head with pleasure.  I laughed and bought him another slice. 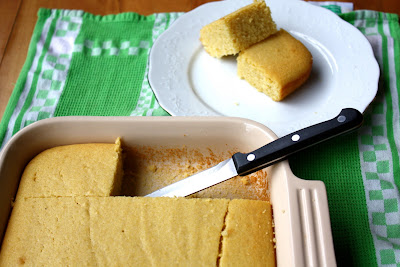 Since then, it's become one of his favorite baked goods (and his first reason to want to visit the South!).  It's not something I was used to making very often before we moved in together– I'm more of a sweets fiend– but I quickly got up to speed.  And so when I searched for a buttermilk recipe last week and cornbread came up, my chances of making anything else went right out the window. 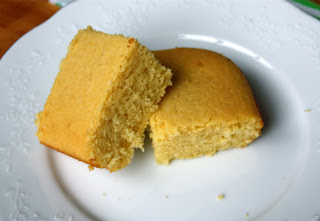 This recipe has a lot going for it.  It's delicious, first of all, but it's also super easy and uses only one bowl.  Now, I know many of you cornbread purists will tut at my use of a pan instead of a cast-iron skillet, but you gotta use what you got, and I don't have a skillet that can go in the oven.  Still, this bread was buttery, a little sweet, with just a hint of crunch on the edges, and that was fine by me!  (It was also fine by the bf, who ate most of the pan that night when he got home.  We finished the rest on a picnic the next day– it travels well!)

I plan on making this my go-to recipe for cornbread; I also plan on introducing as many Europeans as I can to this wondrous food.  So far I've spread the word to at least six people, but I suspect there will be much buttermilk in my future if I expect to change the world! 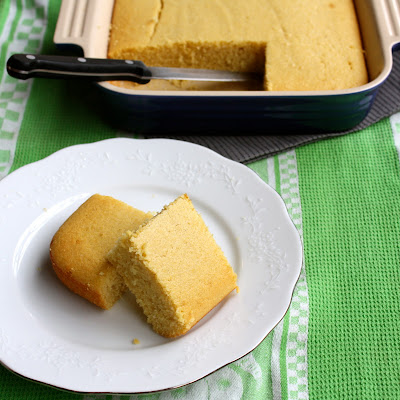 *See?  I was getting there eventually!


Combine and then add to the mix:
1 c buttermilk
1/2 tsp baking soda
Last, mix in:
1 cup cornmeal
1 cup all-purpose flour
1/2 teaspoon salt
Stir until well combined and few lumps remain, then spread into pan and bake 30-40 minutes, until a toothpick inserted into the center comes out clean.