Who can take a sunrise, sprinkle it with dew?

Pin It Not me, apparently.  No candyman am I.

I've been trying to make candy all week.  I can't make it to my boyfriend's families houses for the holidays, so I wanted to send him with a big, pretty jar of caramels (I was going to make toffee, with chocolate and nuts, but his dad hates chocolate.  I KNOW).  I found a recipe on Allrecipes.com, which is my new favorite hunting ground because of the number of reviewers and the helpful suggestions they make about cooking time, flavors, etc.

The recipe, found here, looks really easy.  There are only 7 ingredients, and the process is basically: put all ingredients in saucepan, bring to boil over medium heat, and when a candy thermometer reads 250 (or 240, as most reviewers suggested), pop it into a greased tray to cool.  A few hours later, Bob's-yer-uncle!  Easy peasy caramels! 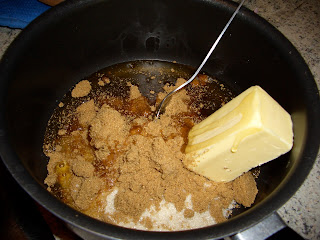 But in this instance, even 217 reviewers and all their collective wisdom couldn't help me.  First, there was the problem of the corn syrup the recipe calls for.  They don't really do corn syrup here in the UK, so I was back to substituting.  The first time around, I used a combo of something called liquid glucose and honey.  The consistency seemed right, and I didn't think honey flavor would be a problem.  And it wasn't, although it was noticeable. 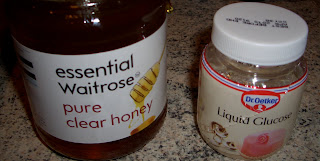 What was a problem was the cooking process.  Now, the reviewers had all commented on how long it took the mixture to reach the correct temperature, so I was happy to wait.  My boyfriend, on the other hand, was not so patient, and was convinced we should turn up the heat.  Oh, and halfway through all this my candy thermometer (which I'd bought specially for this project) started telling me the temperature was decreasing.  GAH.  So I decided to go with the old tried-and-true method of dropping a bit of the stuff into cold water to see if it forms a soft ball.  Which worked just fine... ish: 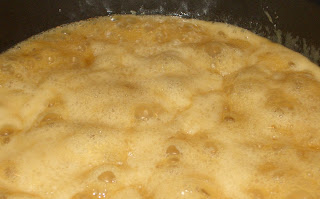 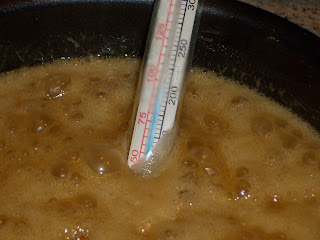 And then the thermometer crapped out on us. 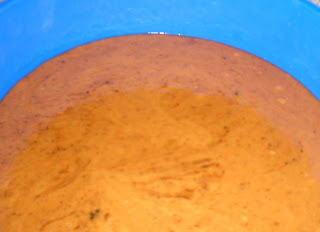 But it turned out kind of pretty, no?

In the end, the sugar was scorched, which didn't taste terrible but was a bit dark.  But the texture was at least almost right.  The candy was chewy, but I suspect we did overcook it a bit, because the pieces (which were damn near impossible to cut) start out hard as rocks in your mouth, and then soften into filling-sucking wads of glue.  Delish. 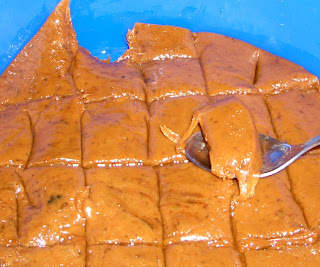 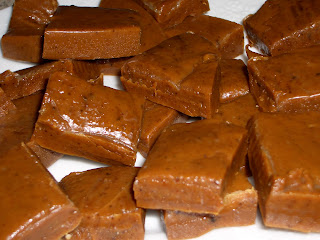 It looked ok in the end though...  Too bad about the flavor.

I was pretty disappointed, so I took a day off to recover, and when I got up the nerve to try again today I decided to change the corn syrup sub; this time I used sugar and water in the proportions recommended here (my new favorite website for when I'm in London).  And I ignored the thermometer altogether, after a sad attempt to calibrate it, and just watched the mixture for color indications and clouded up glass after glass of cold water until the soft-ball stage was reached.  Or so I thought. 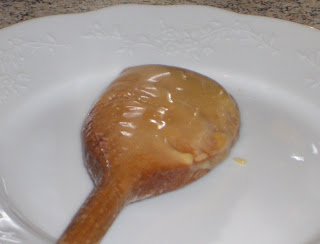 This was the fun part.

It all looked hunky-dory; the caramels setting in my silicone cake pan were the right color, and the bits I was eating off the spoon seemed to have the right chewiness.  But a few hours later, Bob's-yer-uncle!  Easy peasy fudge! 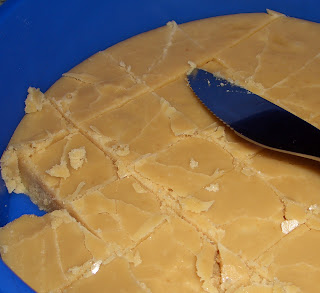 Weirdly difficult to cut too...

Yes.  Fudge.  The stuff crumbles in your mouth, and basically tastes like sugar and cream.  Which, again, isn't necessarily a bad thing, but it's certainly not caramel.

Now, diagnostics.  First of all, I suspect the gooey nature of corn syrup is essential, and therefore the second sub wasn't quite right (don't blame the website, though.  I'm still convinced it's the be-all and end-all).  And secondly, it should be noted that the saucepan I used (the only one we have) is a non-stick (which, according to one Allrecipes reviewer, is the kiss of death), and weighs about an ounce.  Apparently a heavy-bottomed pot or pan is required for candy making. 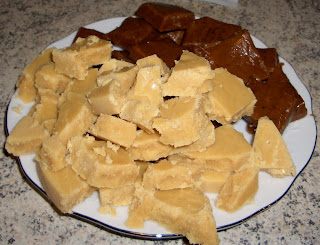 At least my failures look kind of nice... they do complement each other!

So.  Sigh.  I have failed twice, and I think I know when I'm licked.  At least for the moment.  To be fair, I've decided not to make caramels for the bf's fams anyway; I'm going to make toffee for both sides (at least the kids will enjoy it), and then lemon bars for his dad and my grandmother's delicious chocolate chip cookies for his mum.  So I suppose the caramel stress is moot.  But I still don't like failing.

In order to console myself, I went back to what I do best: baking.  I still tried something new, but I had my mojo to fall back on.  I made these cream biscuits from SK, to use up the extra heavy cream from the caramel fiasco, and boy did they turn out fantastic!  Just what I was craving too, after all that sweetness: 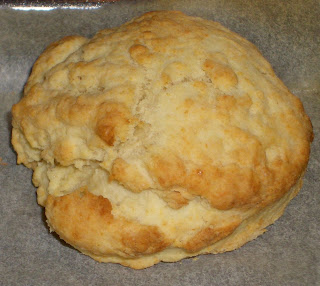 Just a little taste.  I'll post a photo-essay (this is enough writing to last you through December) about the biscuits next time.

So in the end it all worked out.  And I'm going to go buy a heavy-bottomed pot before I attempt the toffee later this week.  I'm still determined to conquer this candymaking thing.  I'll keep you posted!
Posted by Anne at 12:23