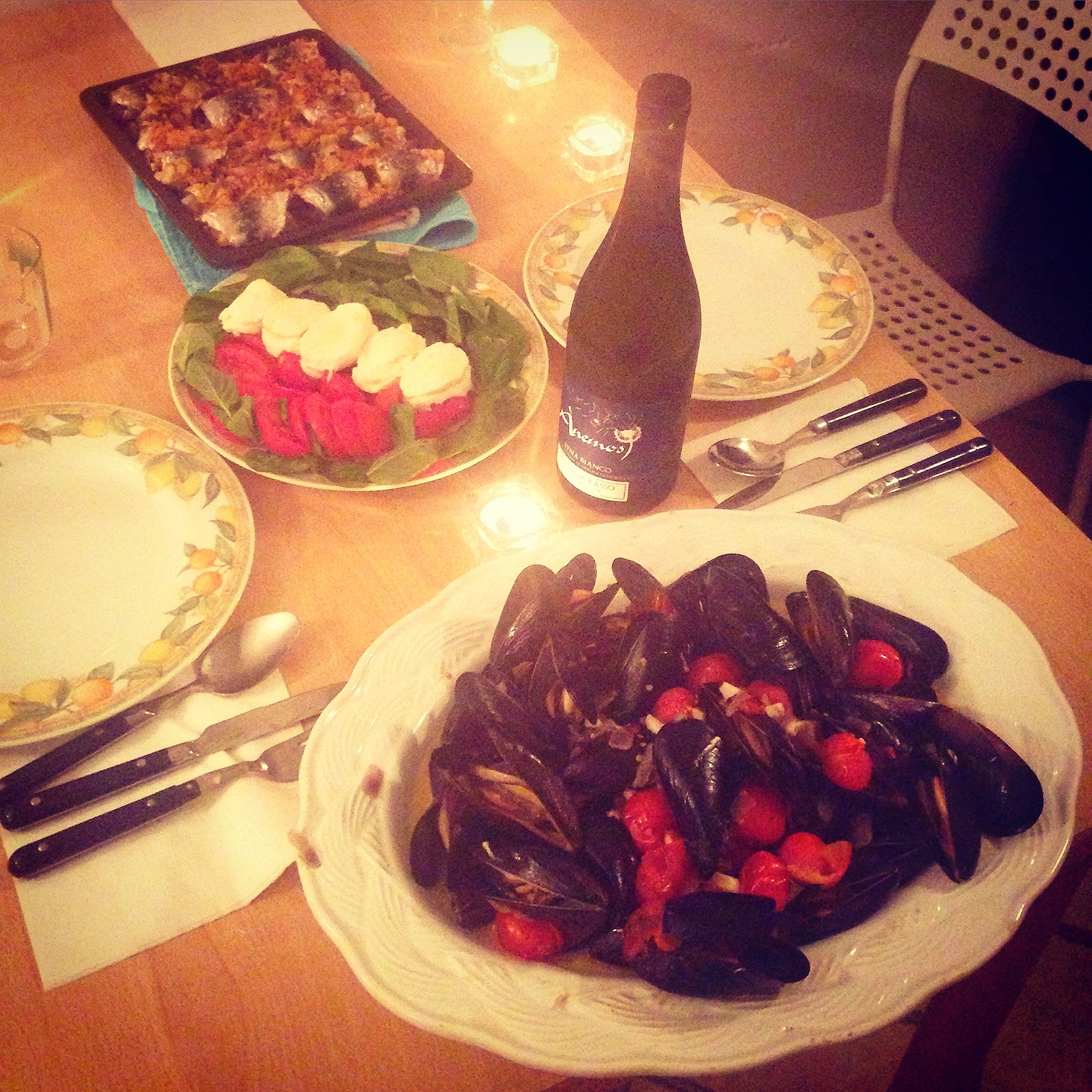 When we were planning our epic European summer trip, my boyfriend and I chose to stay mostly in apartments – we did this partly because it was cheaper than staying in hotels and more private than staying in hostels (which we did in Naples, and that was a weird flashback to my twenties), but only partly.  The other reason we chose apartment living was, as ever, food-related: we wanted to be able to cook, ideally making use of local ingredients we wouldn't have access to at home.

So, given that information, you might be surprised to learn that we didn't cook in our own place once for the entire trip – not in Berlin, or Bologna (where we did cook in someone else's home), or Rome, or any of the other cities where we had access to our own kitchen.  Oh, sure, we made coffee, and ate cheeses and meats which we bought at markets and grocery stores, and drank wine...but we didn't actually cook a meal.

When we got to the end of our trip, three days in Sicily, we both agreed that it was past time we made use of the local seafood and our own cooking skills.  We visited the market in Siracusa, where we were staying, and got distracted by oysters and wine, and then octopus salad, and then the heat – by the time we remembered our intention to cook the stalls were closing and we were wilting.  We returned to the air conditioning and made plans to go back the next morning, our last full day in Sicily.  Meanwhile, we brainstormed the dinner we would make: I was hooked on the idea of doing mussels, Sicilian-style, of course, with tomatoes and garlic and white wine; my boyfriend had a more involved dish in mind, rolled sardine filets stuffed with bread crumbs and aromatics.  He loves sardines, and was thrilled to see that the fresh ones are in abundance in Italy, especially in the south. 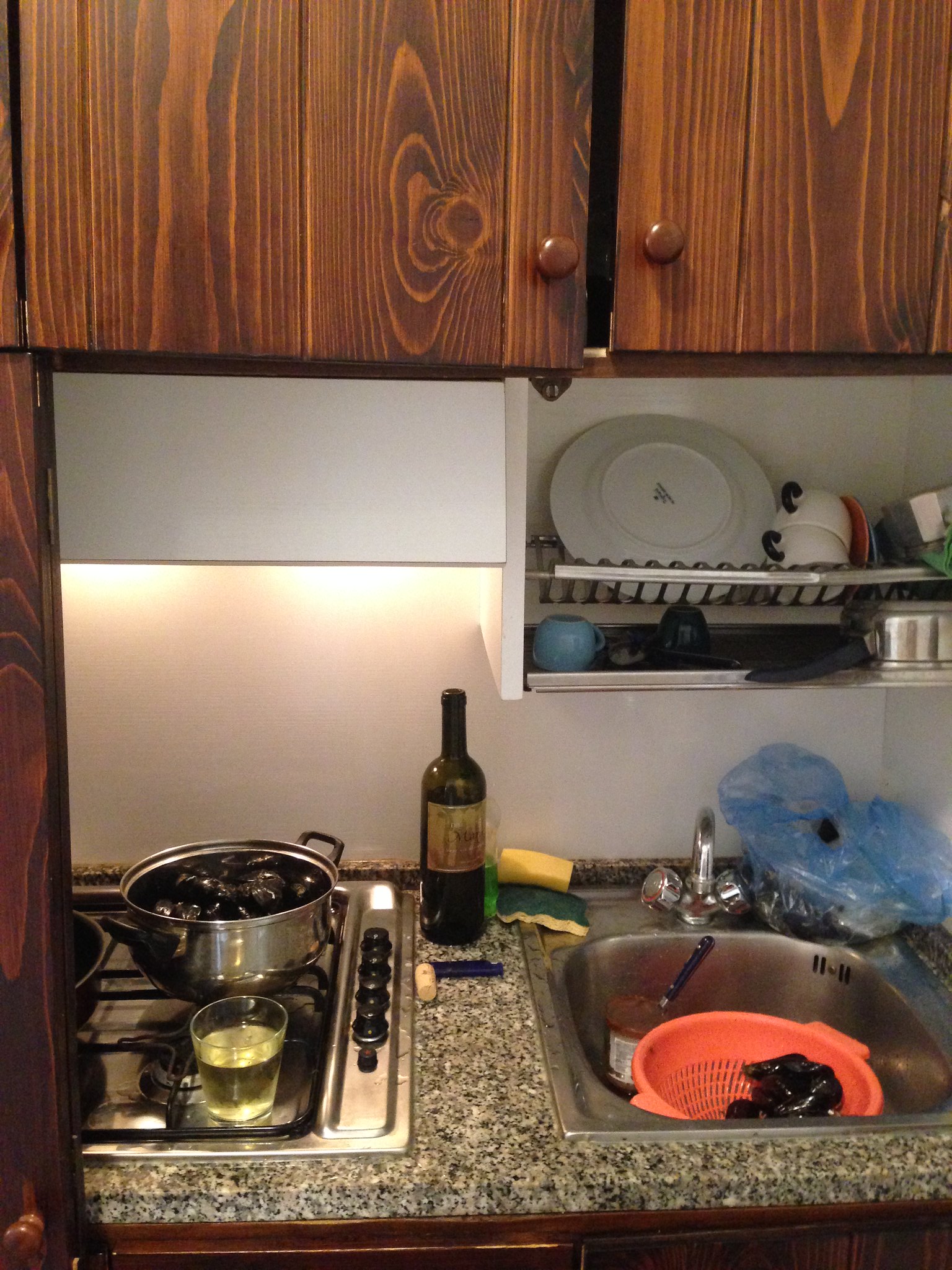 Well, readers, it was a success...eventually.  We super overbought – even so, with a KILO of mussels and a passel of sardines for seven Euro total, a ball of mozzarella for three, and all our veggies and spices for three and change, the most expensive thing about the meal was the wine, at a whopping 13 Euro for the 'fancy' bottle and six for the cooking wine – so we ended up with enough food for at least six people.  This alone wasn't the end of the world, although I do hate waste (luckily my boyfriend can put away a LOT of mussels and the local strays were happy for any excess, I'm sure), but I hadn't really considered the minuscule size of our apartment kitchen when I agreed to the kilo of mussels – suffice it to say, I did the best I could, dividing the mussels into two batches and using a chair and the floor as extra 'counter space,' but it was not easy and I may have freaked out a couple of times. 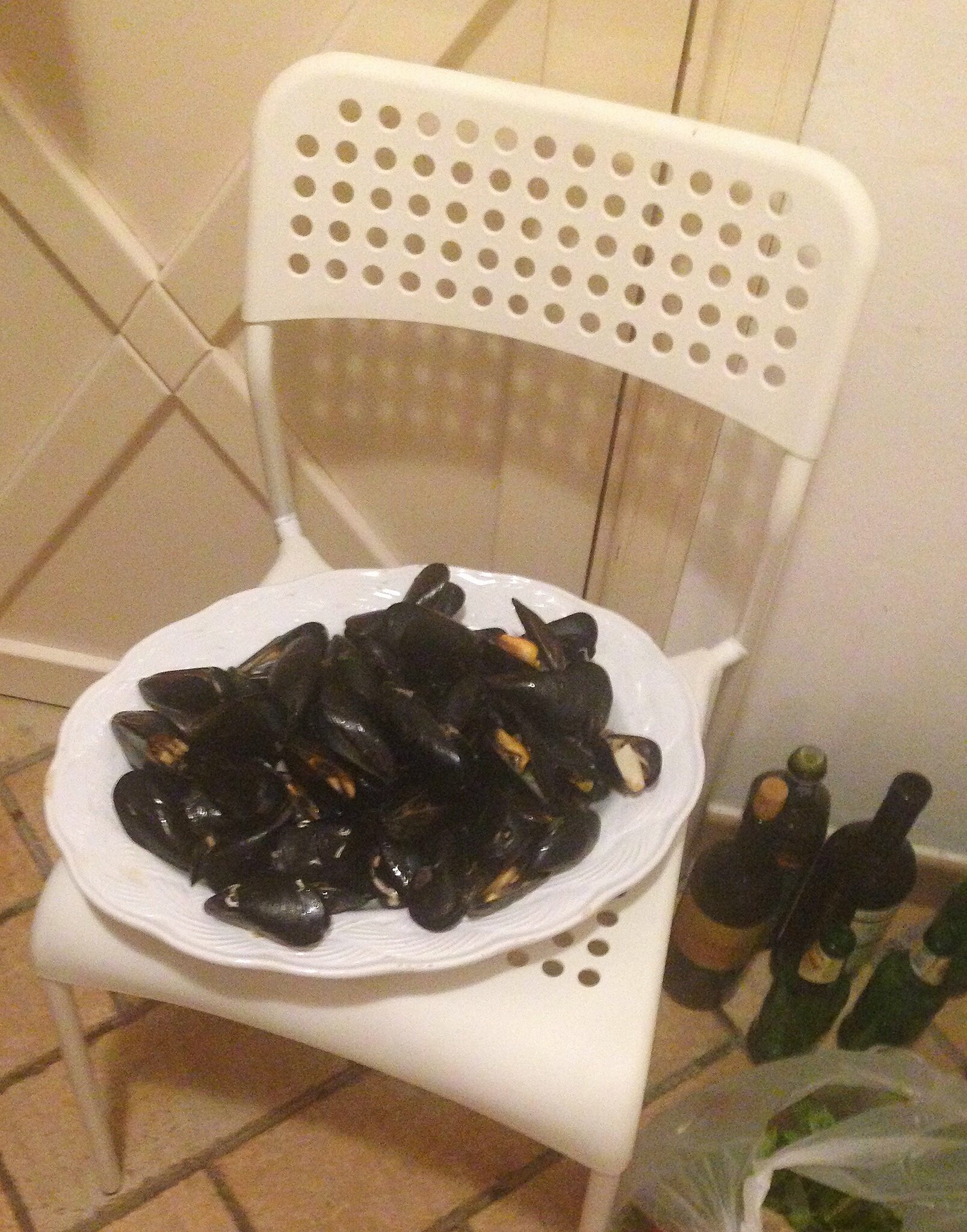 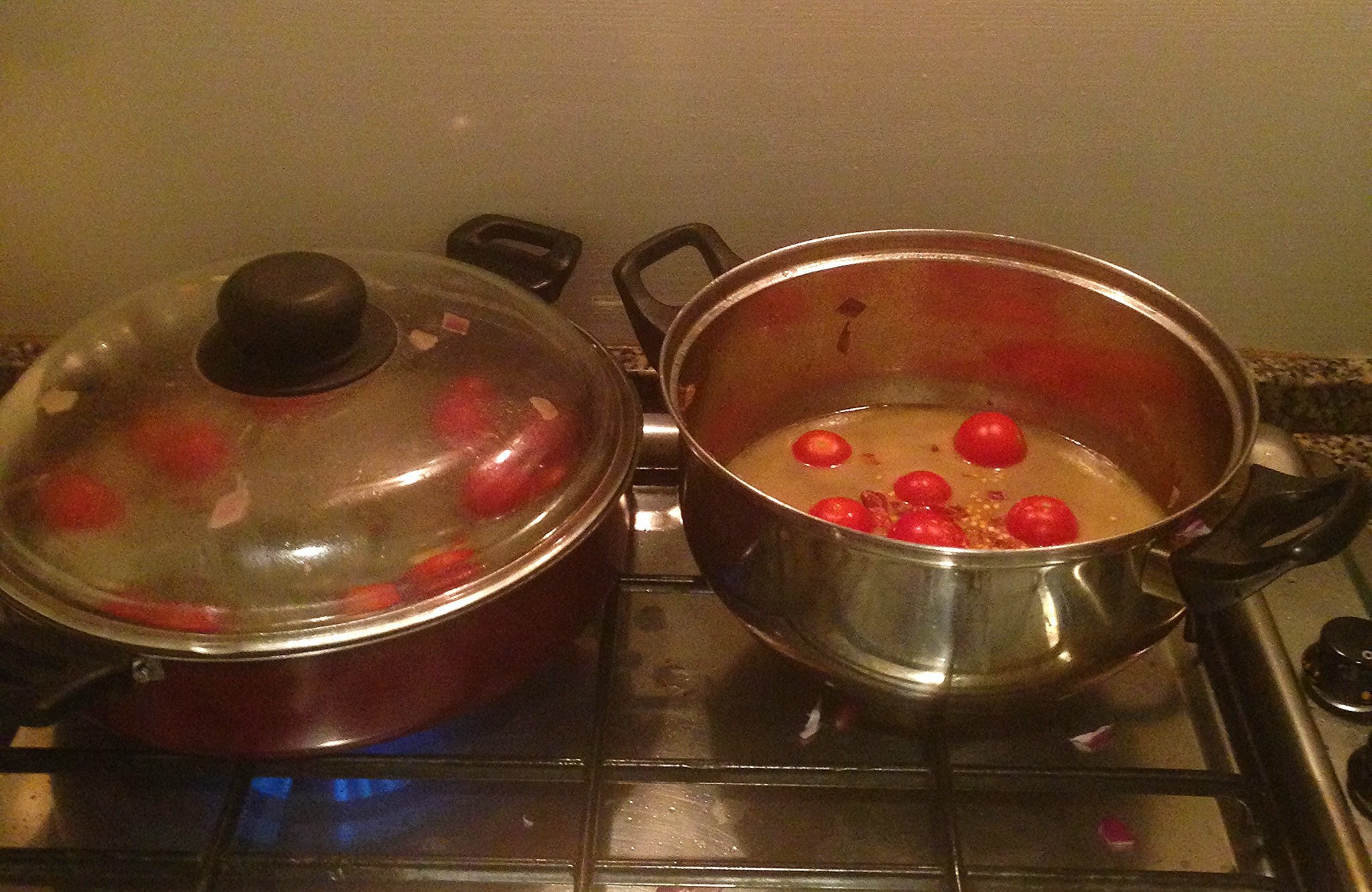 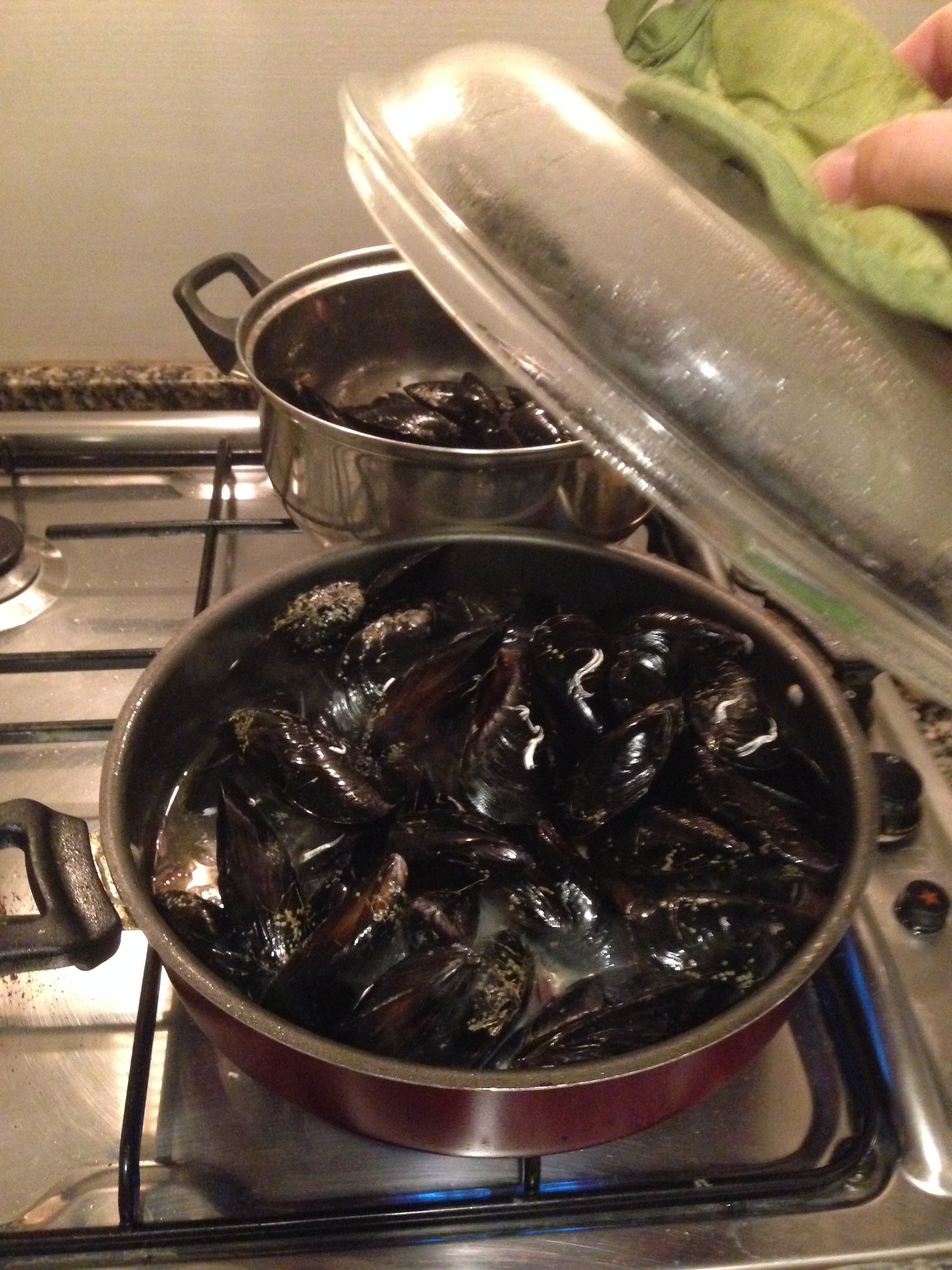 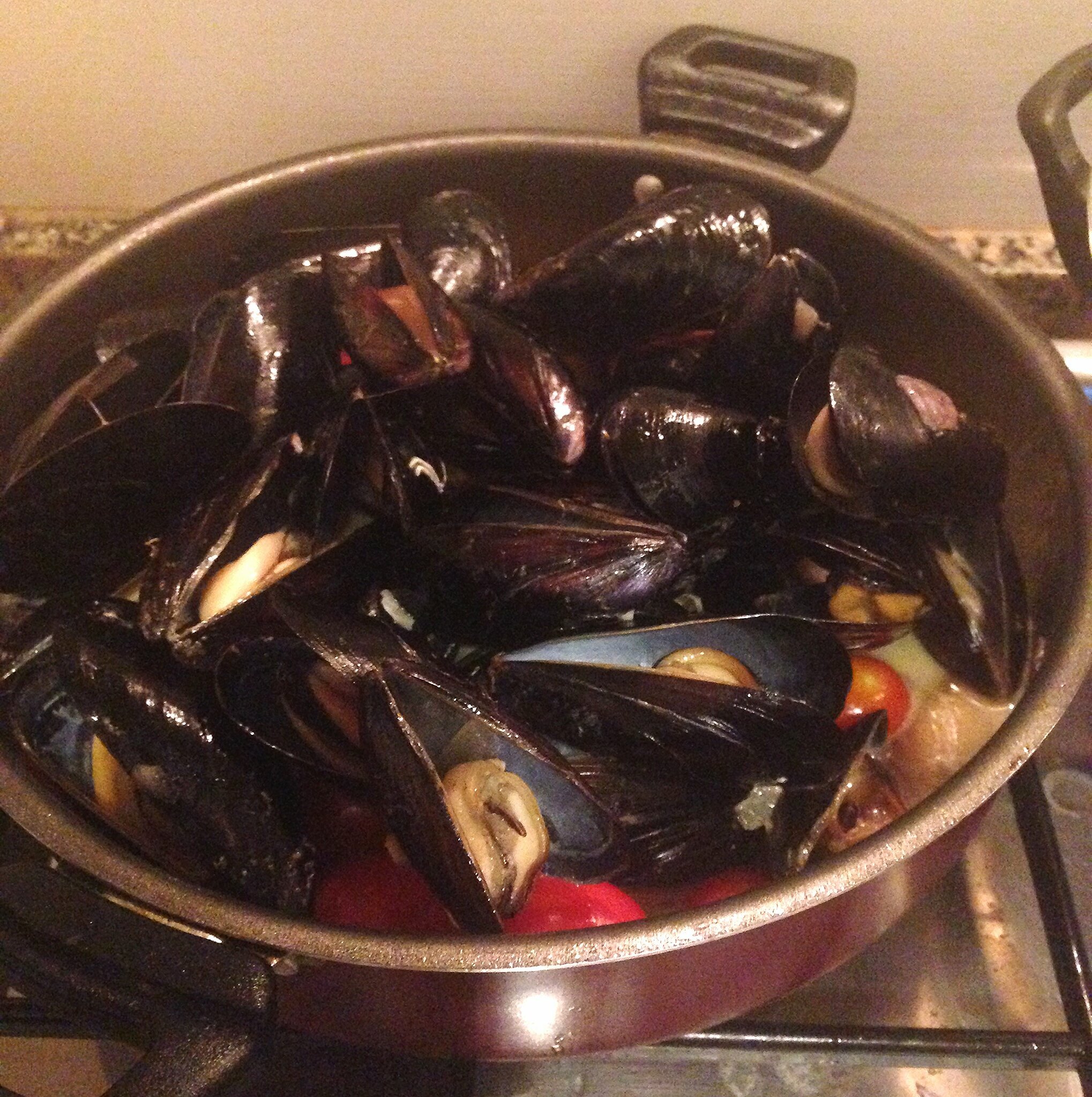 Meanwhile, my boyfriend was prepping like a star at the small dining table nearby, chopping up artichoke hearts and olives and mixing everything together in a bowl, then delicately rolling sardine filets around handfuls of the mixture and placing them on a tiny baking sheet, ready for the toaster oven (he's actually a master toaster oven chef – for my birthday in Tahoe he cooked stuffed Cornish game hens for dinner and made bacon and egg cups and cinnamon buns for breakfast the next day!).  By the way, I do have some photos of this part, but they display such a rational and organized prep process that I'm loathe to share them and make myself look worse than I already do!  So here's the beautiful final result, instead: 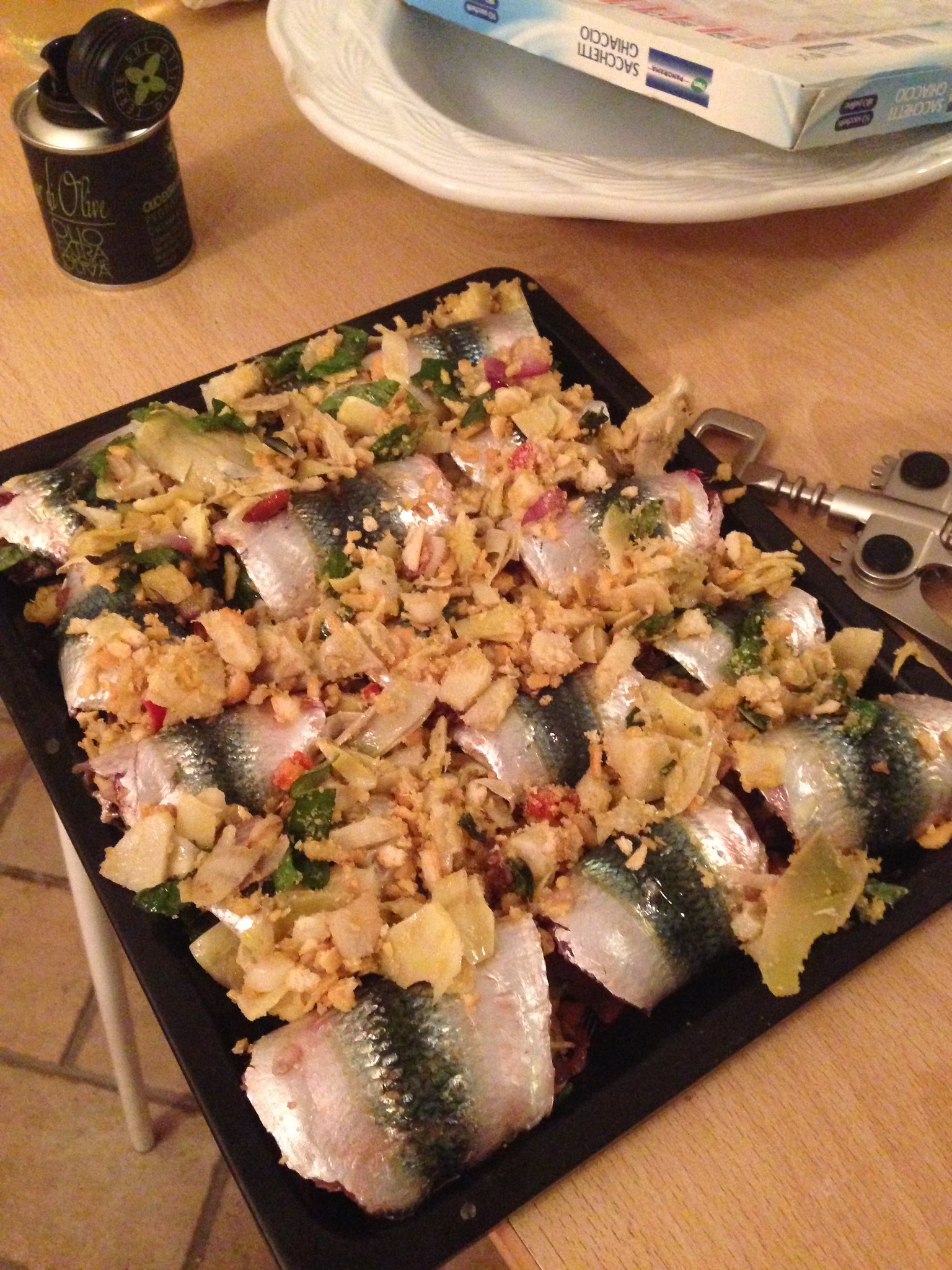 In the end, after much improvisation, one late-hour dash to a tourist shop for a too-dear tiny bottle of olive oil, and many sips of the 'cooking' wine, I got my part together just as his came out of the toaster oven, and we sat down to a very late but very delicious dinner, a fitting end to an exhausting but wonderful trip. 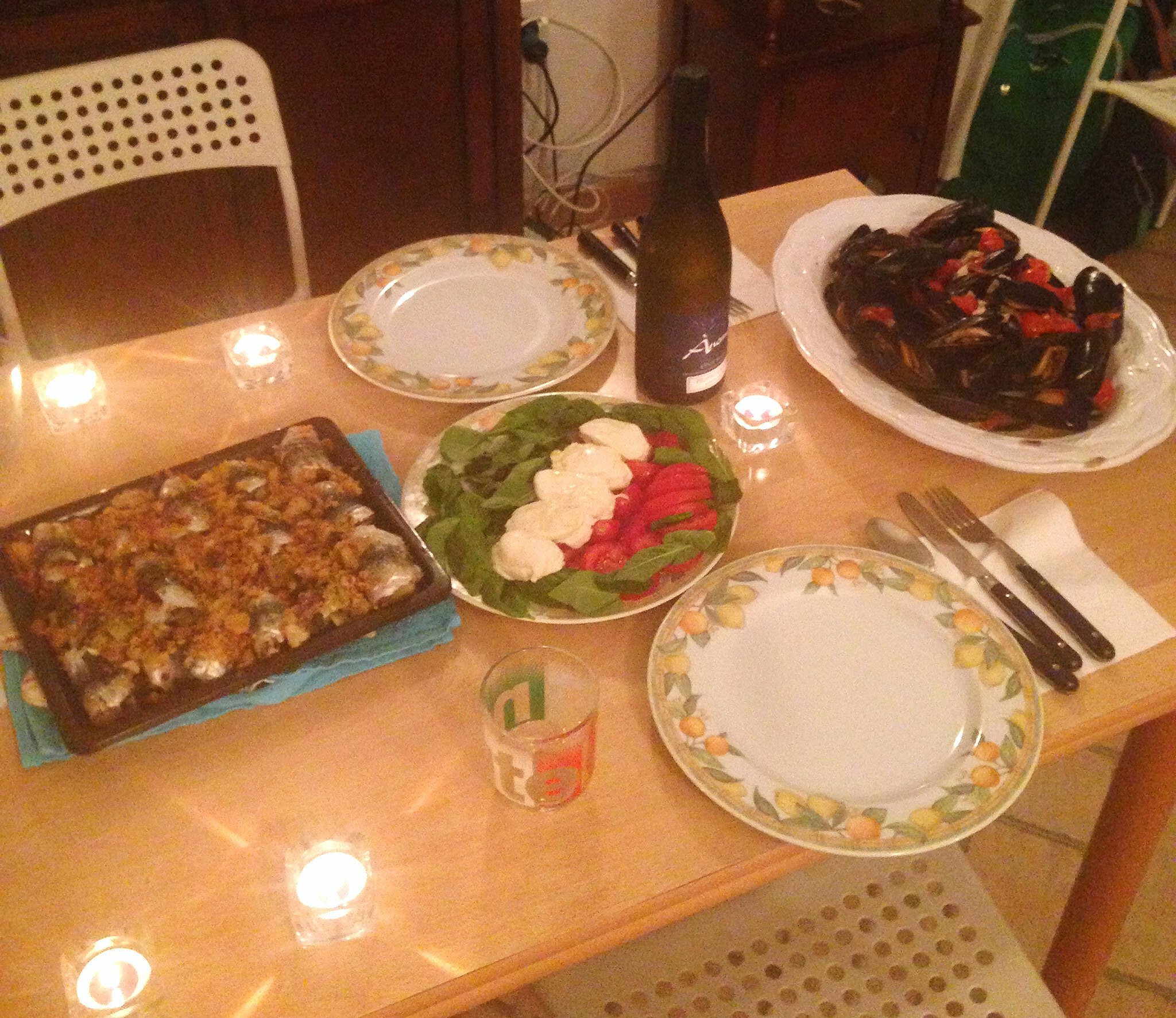 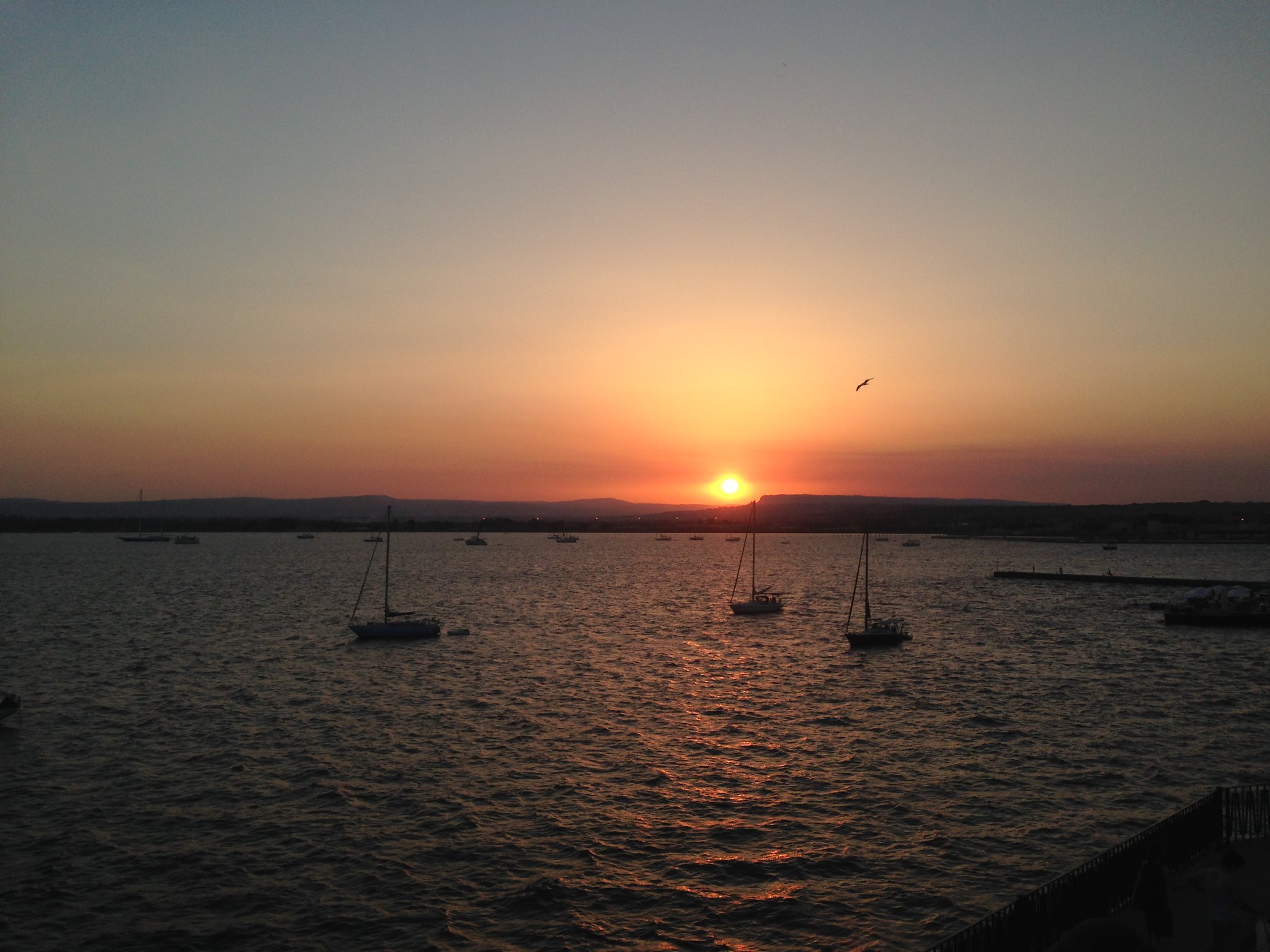 Sicilian Mussels with Citrus, Tomatoes, and Chili
(adapted for ingredient availability from My Little Chequered Kitchen)

Procure 30-40 fresh mussels and sort through them, discarding any dead ones – if the shells are closed they should be fine. You can check if open mussels are alive by tapping the shell on the counter – if they shut they're alive but if they stay open you should chuck them.  Scrub the remaining mussels until clean and remove the beards (if you need guidance, as I did, this post from The Kitchn should help).

Cook the onion until soft and then add:
4 cloves garlic, finely chopped

Cook until fragrant, making sure the garlic doesn't burn, then add to the pot:
Cleaned mussels
1 tsp vinegar (we used balsamic but the recipe called for white wine)
1/4 c white wine

Cover the pot and cook until the mussels open; remove them from the pot and set them aside as they open.  Once all the mussels are set aside, add to the pot:
3/4 c white wine
2-4 handfuls fresh cherry tomatoes
1 c fresh orange juice
Juice of 1 lemon
1-2 Tbsp red pepper flakes (or one fresh chili, finely chopped)

Cover and boil for five minutes, then return the mussels to the pot, add freshly ground pepper to taste, and simmer for another minute.

Serve mussels in a deep serving dish or deep individual bowls with sauce poured over.  If you have it, add a sprinkle of fresh cilantro for an extra bit of color (we didn't have it, obviously)! 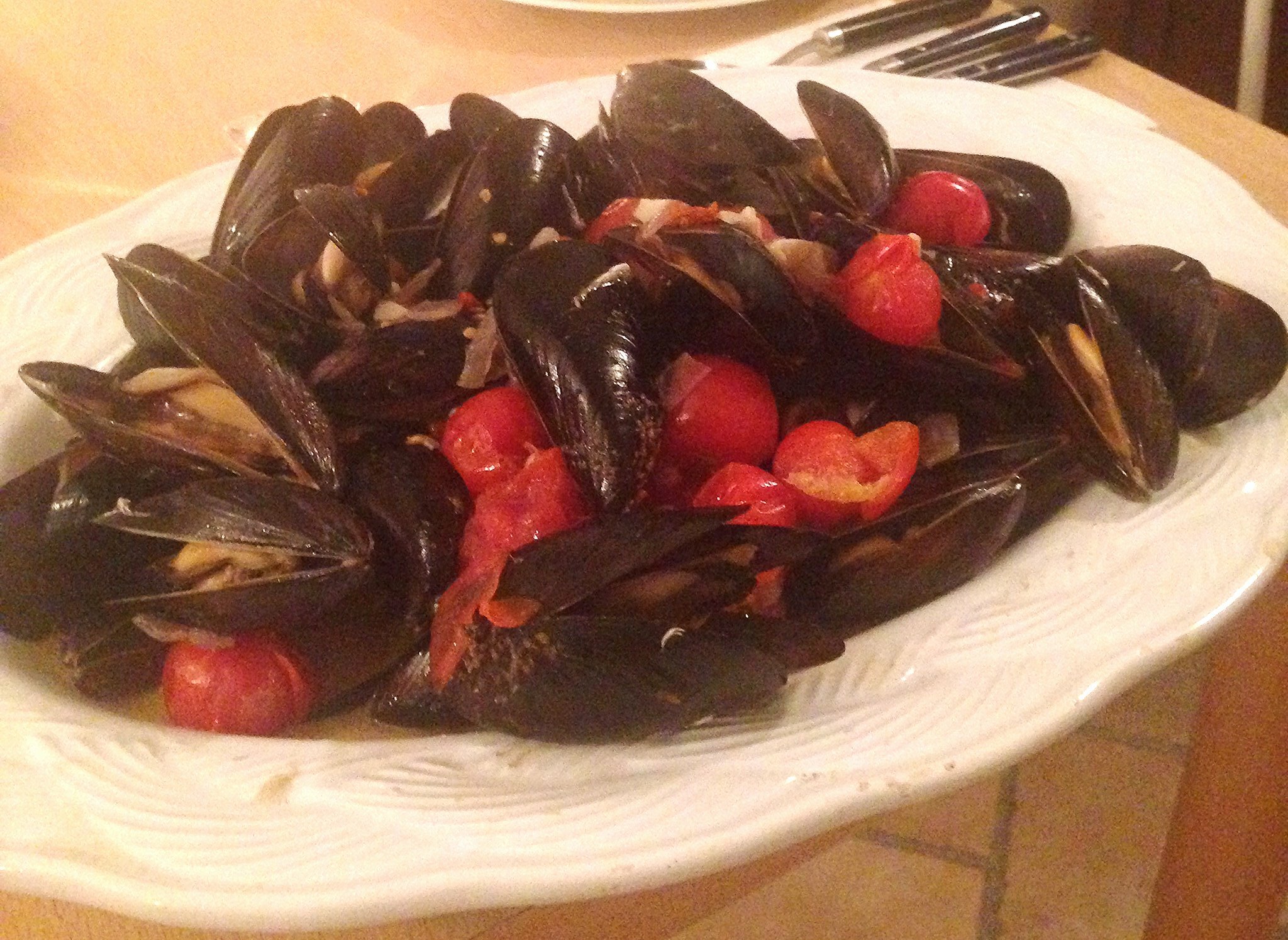 Clean and filet 15-20 fresh sardines (or have them cleaned and filleted for you by the fishmonger).

Pre-heat oven to 375 F (he jammed a pen into what once was the knob on an Italian toaster oven so who knows what it was really set to, but it was supposed to be about 375!).

The filling should be a paste with small chunks, but he did all the cutting with a small pocket knife and it came out super chunky (but it still worked) – a small food processor would be the easiest thing to use here.

Grease a rimmed baking sheet with olive oil. Lay out your sardines skin-side down and put 1-2 tsp (depending on the size of each fish) of filling on the end where the head was, then roll the fish up around the filling. Place the rolled sardines on the baking sheet with the seam down so that they don't fall open. If you have any extra filling you can put it in the gaps between the fish to roast and serve on crostini.

Bake the tray for 15-20 minutes, until the fish is cooked and the skin is crispy. 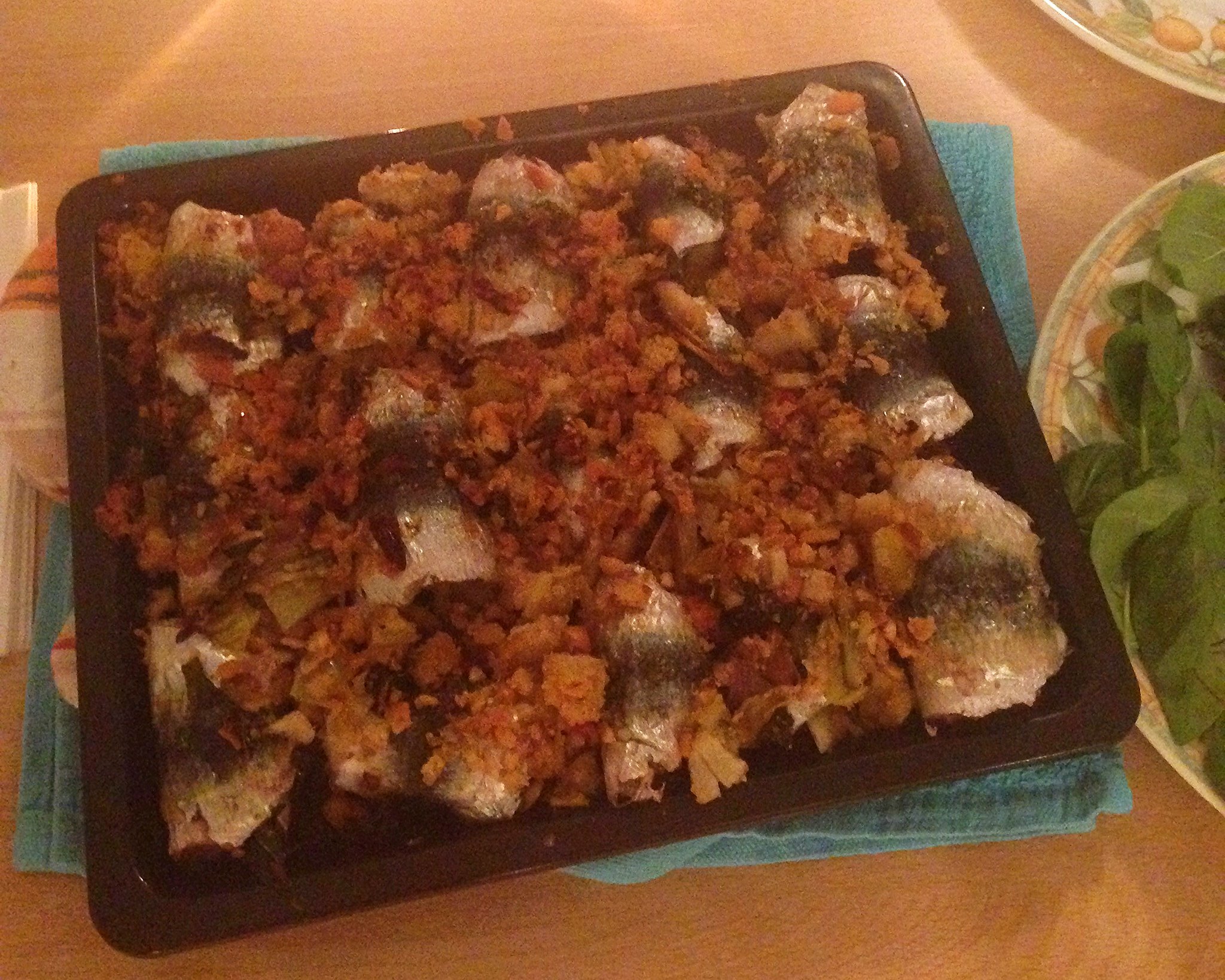