Cocktails or Cake – Why Not Both? Limoncello Birthday Cake with Campari Frosting 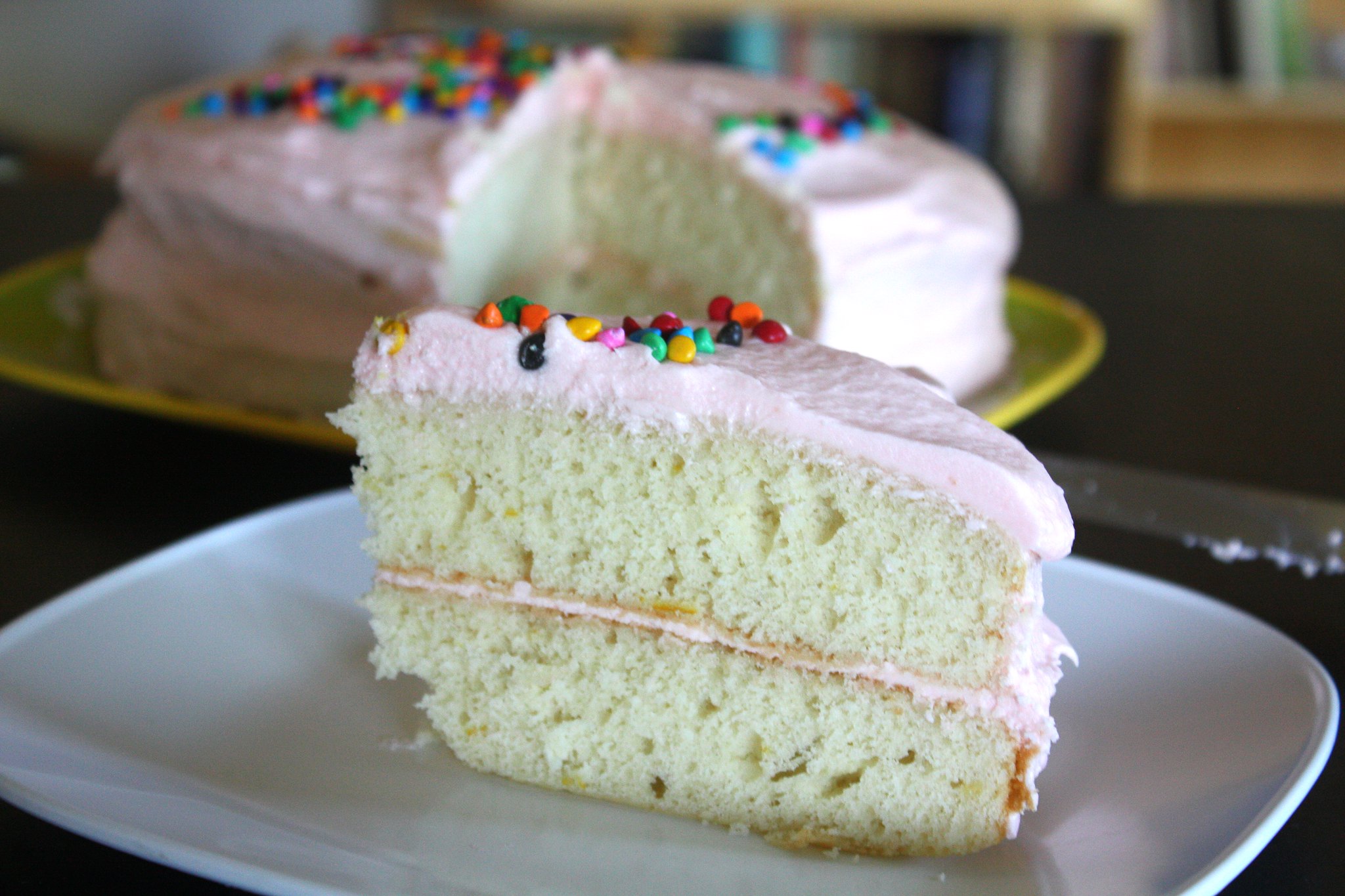 Remember when I made that adorable ha-cake for my friend's half birthday?  Well, luckily for me, despite generally preferring savory to sweet, K does love a good celebration cake, so when her full birthday rolled around this year she requested a cake that incorporated one of her favorite things: booze.  Specifically, Campari, which she fell in love with during a trip to Italy a couple years ago and which has been so well-loved as to have spawned its own hashtag.

Even better than suggesting (I won't go so far as to say demanding) a specific cake for her birthday, K suggested we bake it together, at my parents' house in the Napa Valley.  K is a food blogger too, although she focuses more on savory dishes and wine pairings, and while we've cooked together (we lived together for a while and we made some delicious dinners) we've never baked.  Plus, since she moved to Napa last year we get far too little bonding time, and this sounded like an excellent way to get some 'us' time (plus our assistant, but he's good at respecting our girl time). 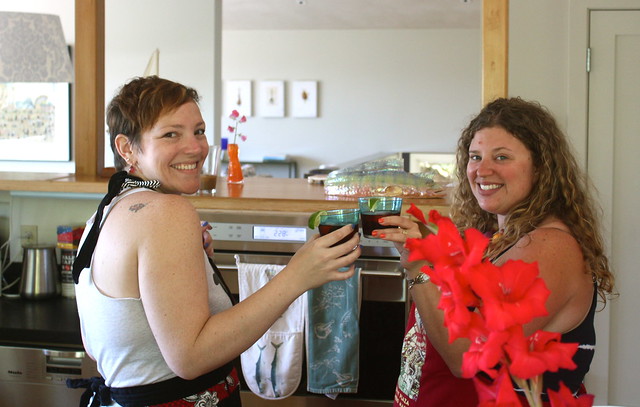 So without further ado, to the cake-baking!  Of course, we started with booze: Negronis (a classic Campari drink), natch, mixed by our handsome assistant (to whom also goes credit for all the photos herein and on Flickr). 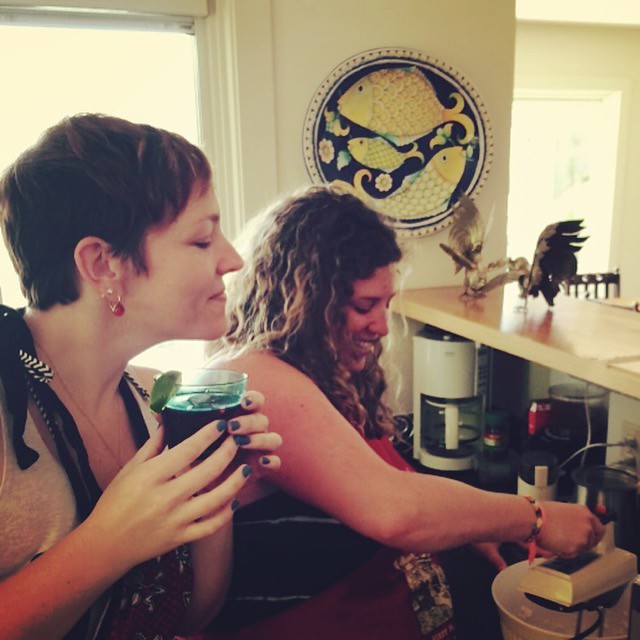 In a rare role reversal, I supervised and drank Campari while K asked my advice.  I won't say it wasn't satisfying ;) 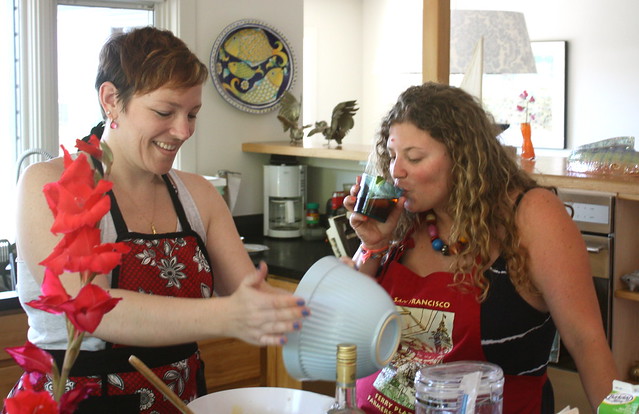 But of course, we got back to our natures quickly enough... 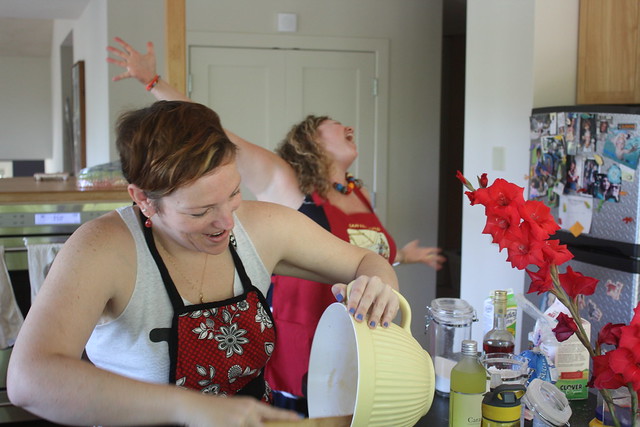 K's nature is quite the performer – her unselfconscious wackiness is one of the things I love most about her.  And despite all the distraction, the cakes turned out perfectly.  We let them cool before making the frosting, which meant an hour on the deck with rosé and cheese and chatter.  Exactly what I needed. 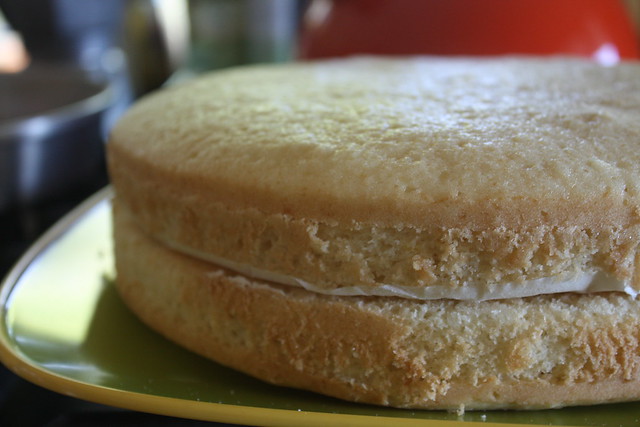 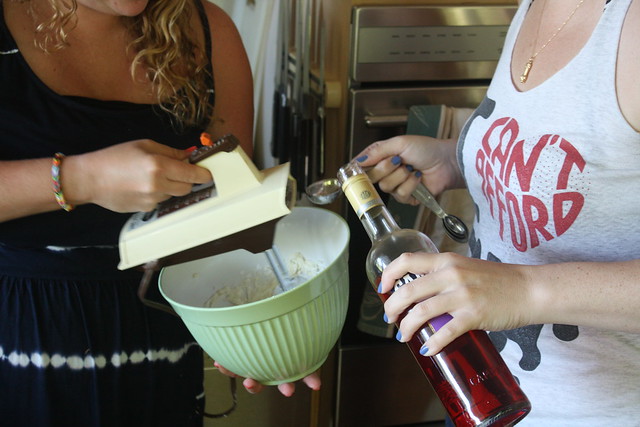 Eventually, though, it was back to work!  The frosting was easy, although we probably should have added some red food coloring, instead of topping up the Campari and powdered sugar in turns until the frosting was pink enough...  The result was a beautiful rose-colored buttercream that was definitely too sweet for both K and me. 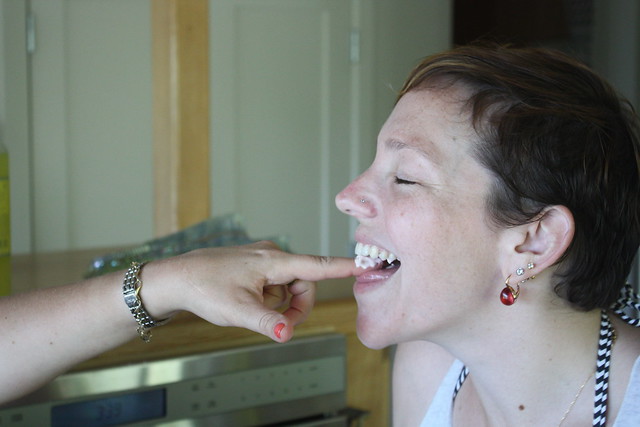 Not that we didn't have fun making and tasting it! 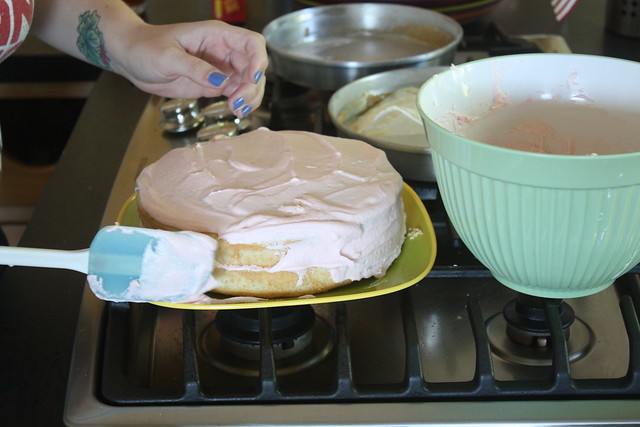 The decorating was easy too, especially since I'm such a laid-back decorator – I'm sure K would have been more Type A but she wasn't the one in control, muahahaha! 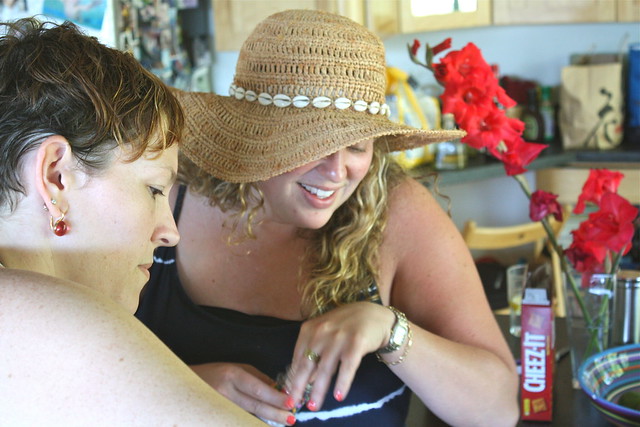 (Whoops, busted, for both the Cheez-Its and the uncombed hair.) 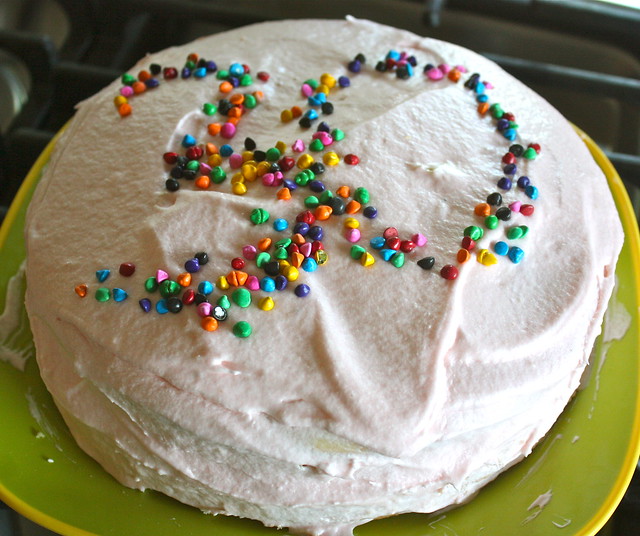 We scrounged some sprinkles, since it was an auspicious birthday that deserved noting, and then each of us had a small slice (K had hers while showering post-swim, because I love her so I spoil her – see pic below). We agreed that the lemon cake was phenomenal, and the frosting too sweet, but I'm not sure you should blame the recipe for that since I think we went a little off-book with that part.

Birthday Cocktail Cake with Campari and Limoncello:
from Serious Eats

Preheat oven to 350F/175C and butter two 8-inch round cake pans. Line the bottoms with parchment paper and then dust with flour, tapping out the excess.

Add, one at a time, beating after each addition:
3 large eggs
Add a bit of the flour mixture to the butter, stir, then then add a bit of the below:
3/4 cup buttermilk

Continue to alternate flour and buttermilk until you finish both, ending with the flour and beating well after each addition.

Divide the batter evenly between the two pans and bake for 30 minutes, until the cakes are puffed and a toothpick inserted into the center comes out with a few crumbs clinging to it. Cool the cakes for 10 minutes in the pans, the remove and cool completely on a wire rack. (Yeah, we didn't do this, because we forgot, and the cakes were still delicious, but... you should probably follow the recipe.)
When the cakes are fully cooled, make the Campari buttercream.

Slice and serve, and if you're feeling particularly birthday-generous, bring your blogging bestie a bite while she showers off the pool water (while drinking a Hell or High Watermelon beer)! 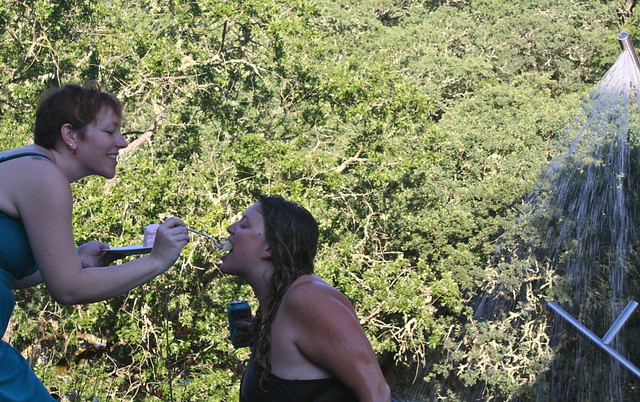