Blogged in the Nick of Time: Easter Baking Experiments 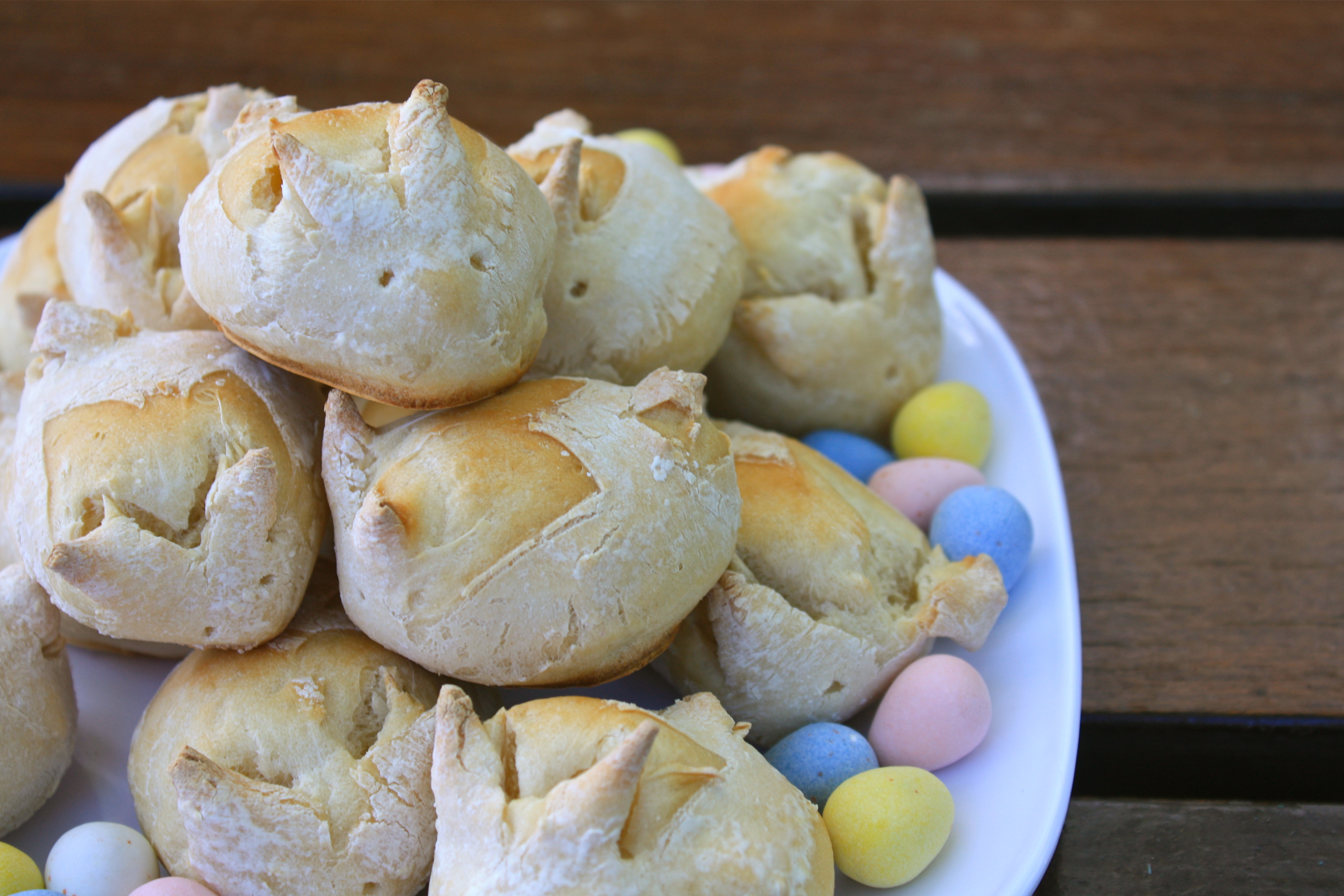 Last weekend, my brother's girlfriend (and my friend) Rachel and I did an Easter crafting day, where we made ridiculously cute magnets to gift to family members in their Easter baskets – we also decided that this weekend we would do even more crafting, this time in the form of baking.  She set her heart on making these super cute fluffy chick cookies, with a further lamb variation of her own invention, while I chose the much easier-looking (if frequently warned-against) bunny bread rolls that have been all over Pinterest of late.  I bought frozen parkerhouse rolls and she showed up in Napa with all her many ingredients in hand, and right after a boozy brunch and a wee wander we came back to the house and got to work.

And by 'got to work', I mean that I pulled some rolls out to defrost and she got started on the first of six or seven relatively involved steps.  This post is going to be mostly photos, with a bit of description alongside, but since (spoiler alert) Rachel's recipe turned out to be a bust and mine is little more than a set of vague instructions, there will be more links and tips than actual directions here, in case you want to recreate anything. 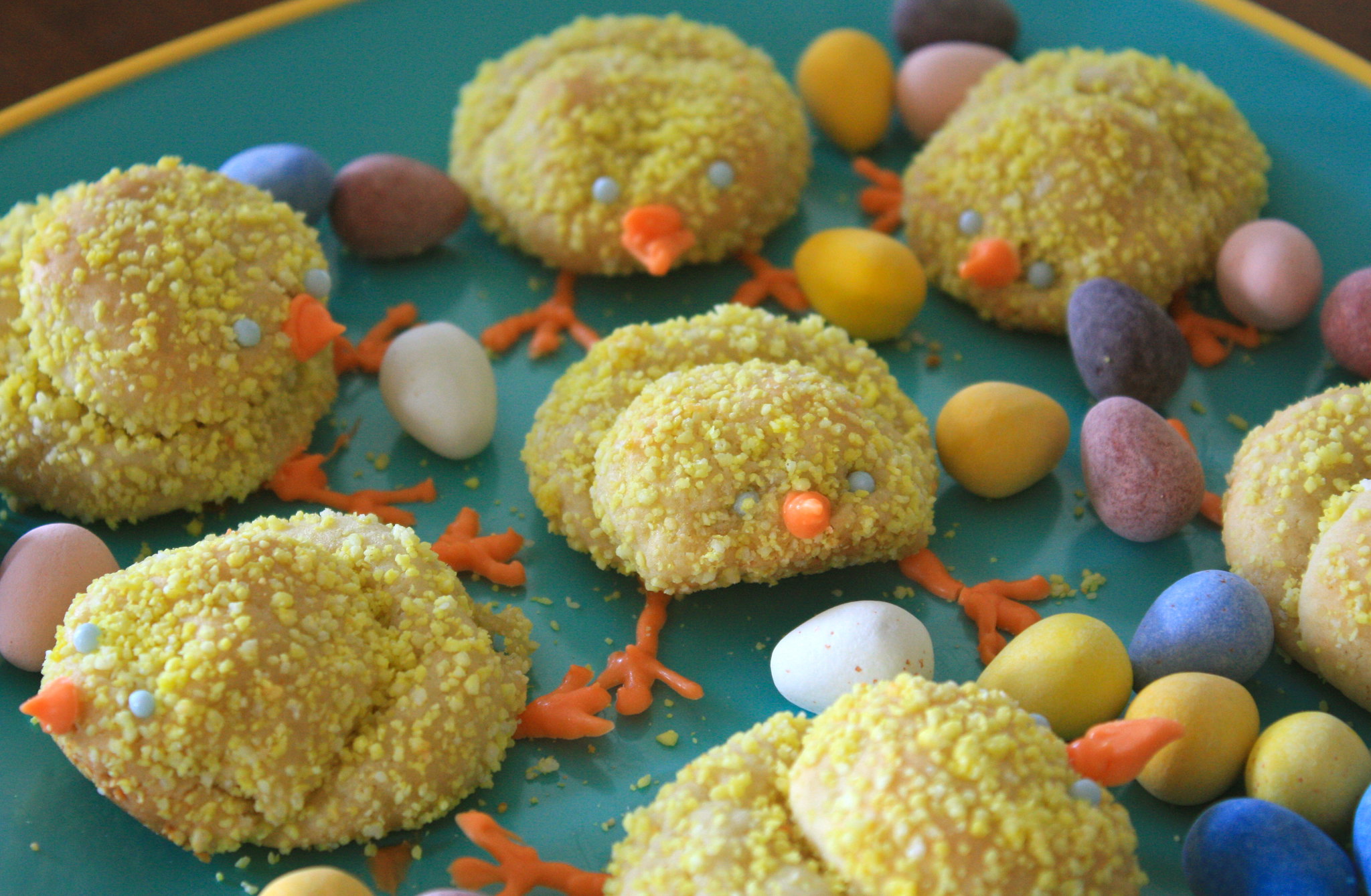 Let's start with the easy method first.  Once my frozen rolls had defrosted and risen (a couple hours on the counter did that part for me), I took a pair of clean scissors and snipped out ears and tails (I also snipped the pointy ends of the ears off, so the bunnies would look a bit less demonic): 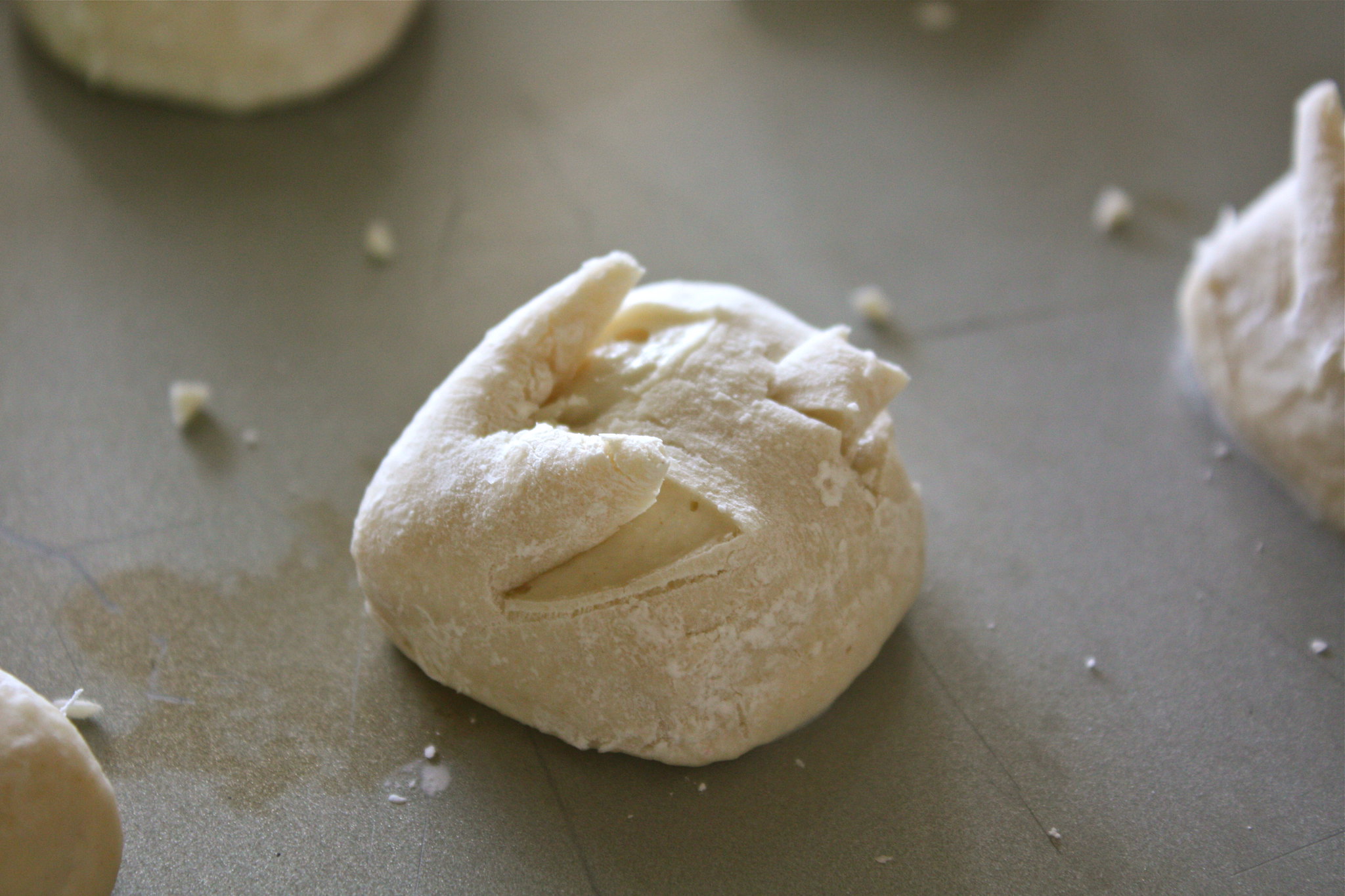 Then I took a toothpick and poked deep holes for eyes: 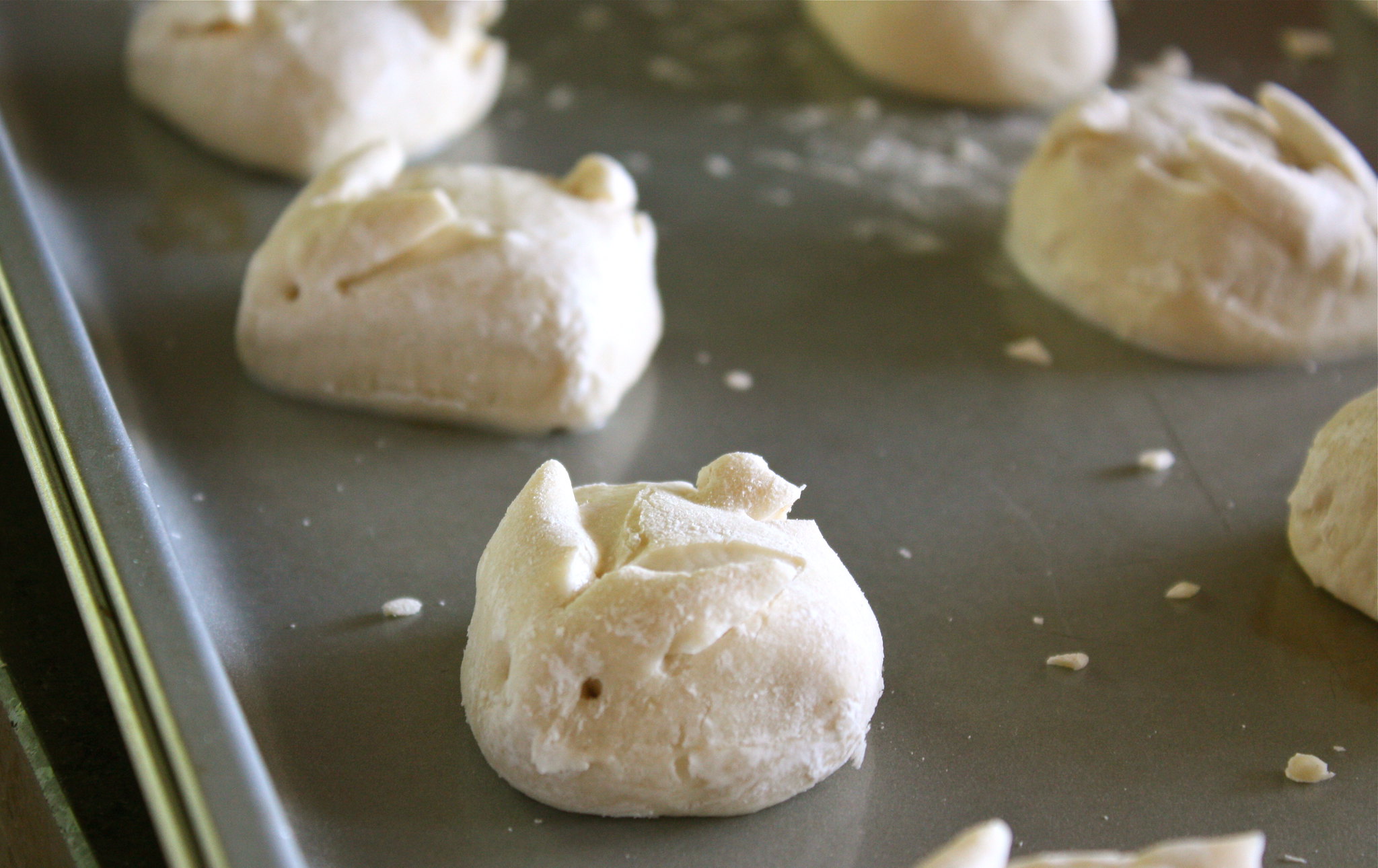 After that, it was just a matter of popping them in the oven for 15 minutes and watching all my delicate snipping puff away as they baked – I'm not going to lie, these guys looked pretty weird when they first came out, even after I tried to mush down the puffy bits halfway through baking.  But with a little posing, they ended up looking pretty sweet: 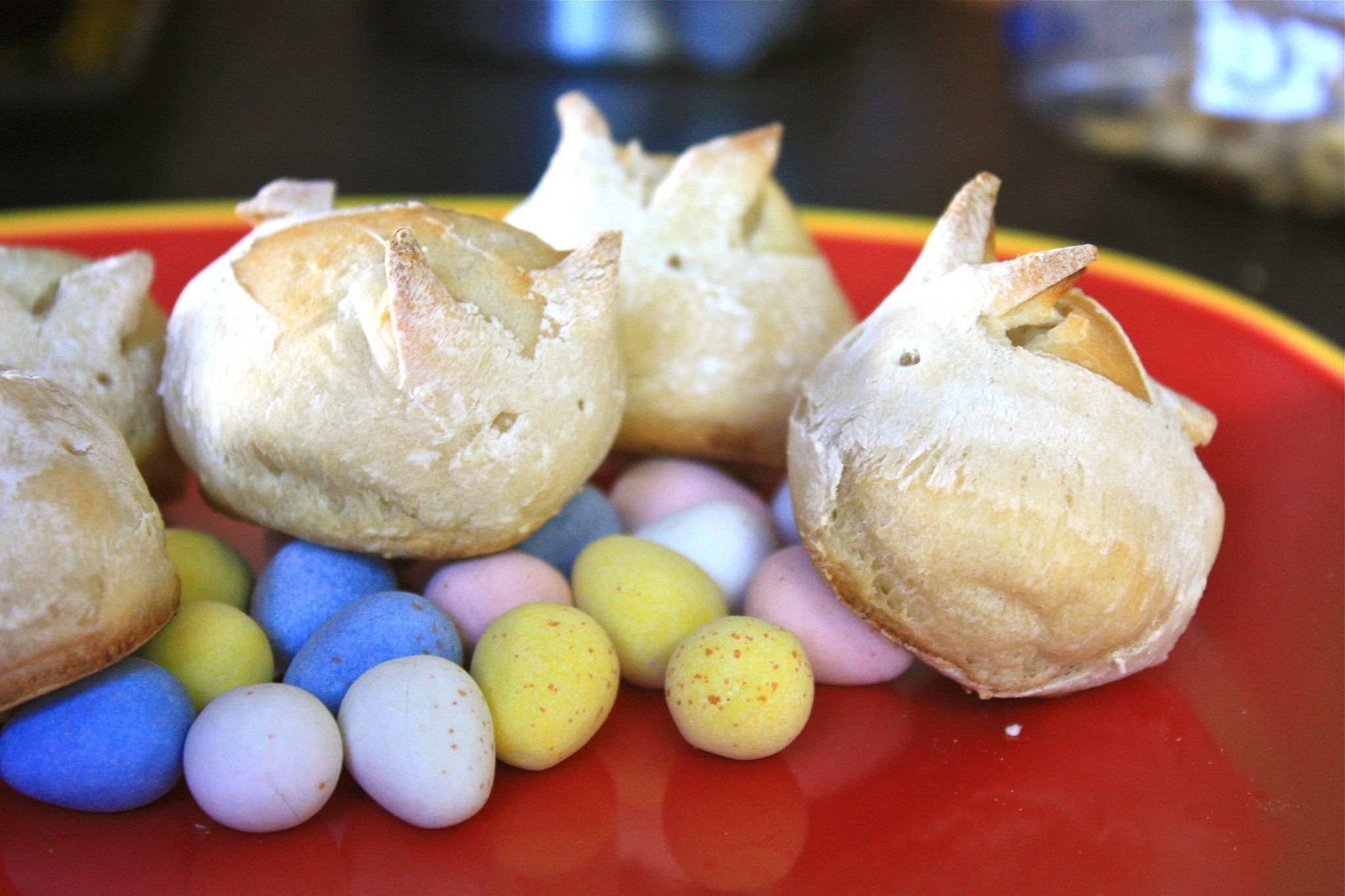 Especially when piled on a plate with Cadbury mini-eggs: 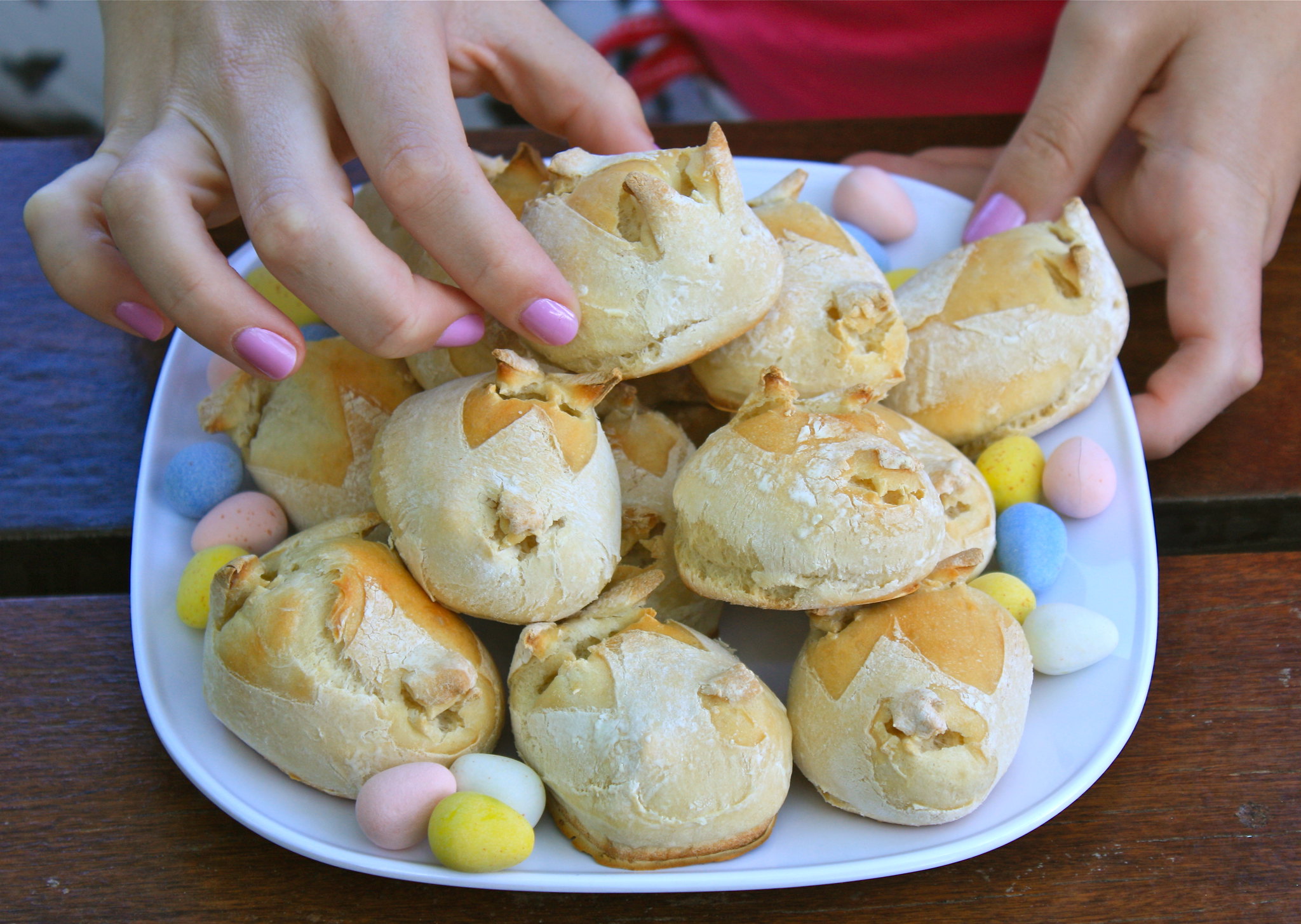 And especially when made to keeeeess: 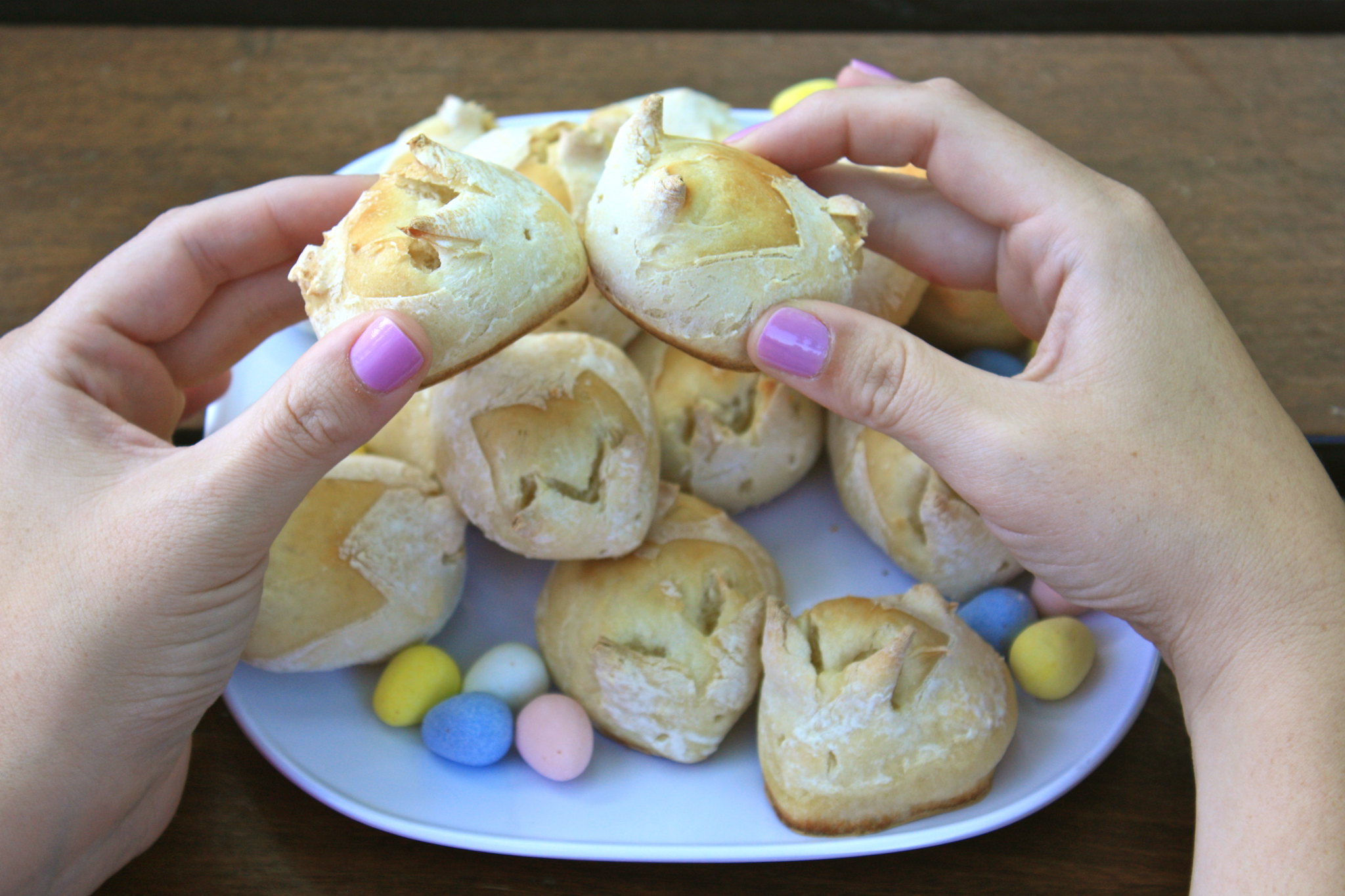 Meanwhile, Rachel had spent much time and effort piping melted candy onto foil to make little legs for her chicks: 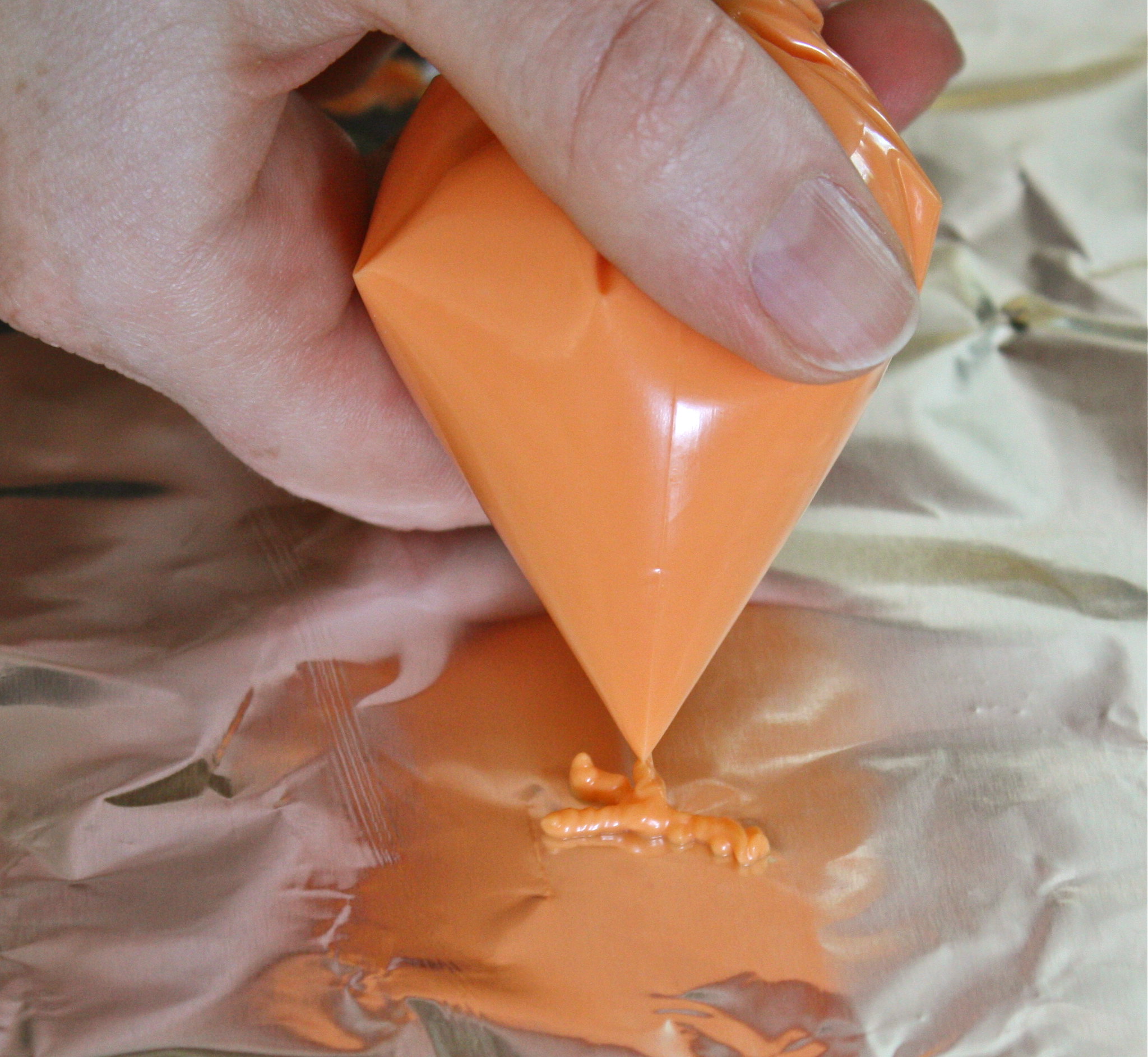 And little ears for her lambs: 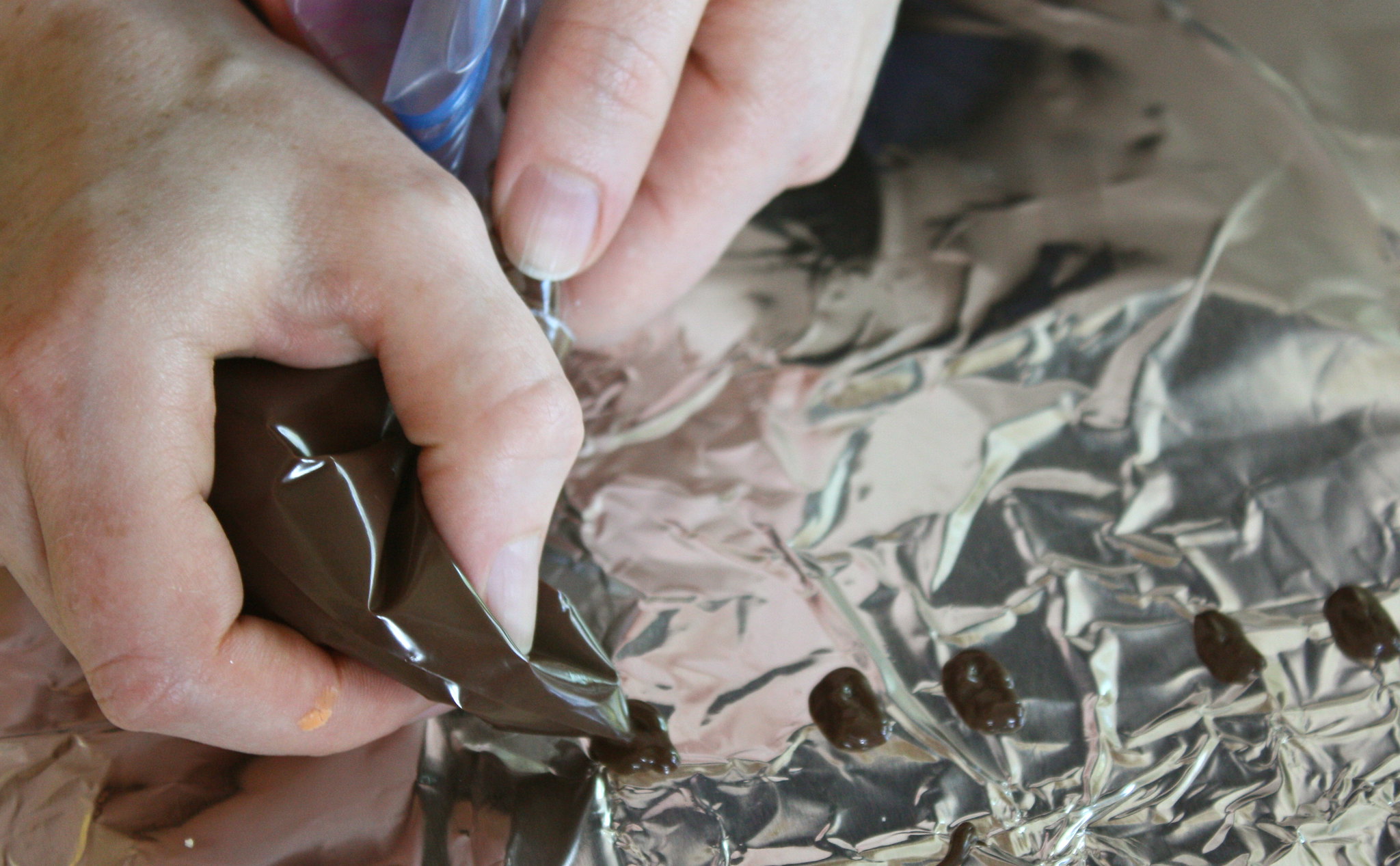 But once we got to the part where we actually made the bodies, it all fell apart.  We'd made the dough exactly according to the recipe, and we'd chilled it for a good two hours, but it was still completely unworkable: soft and gluey and damn near impossible to shape. 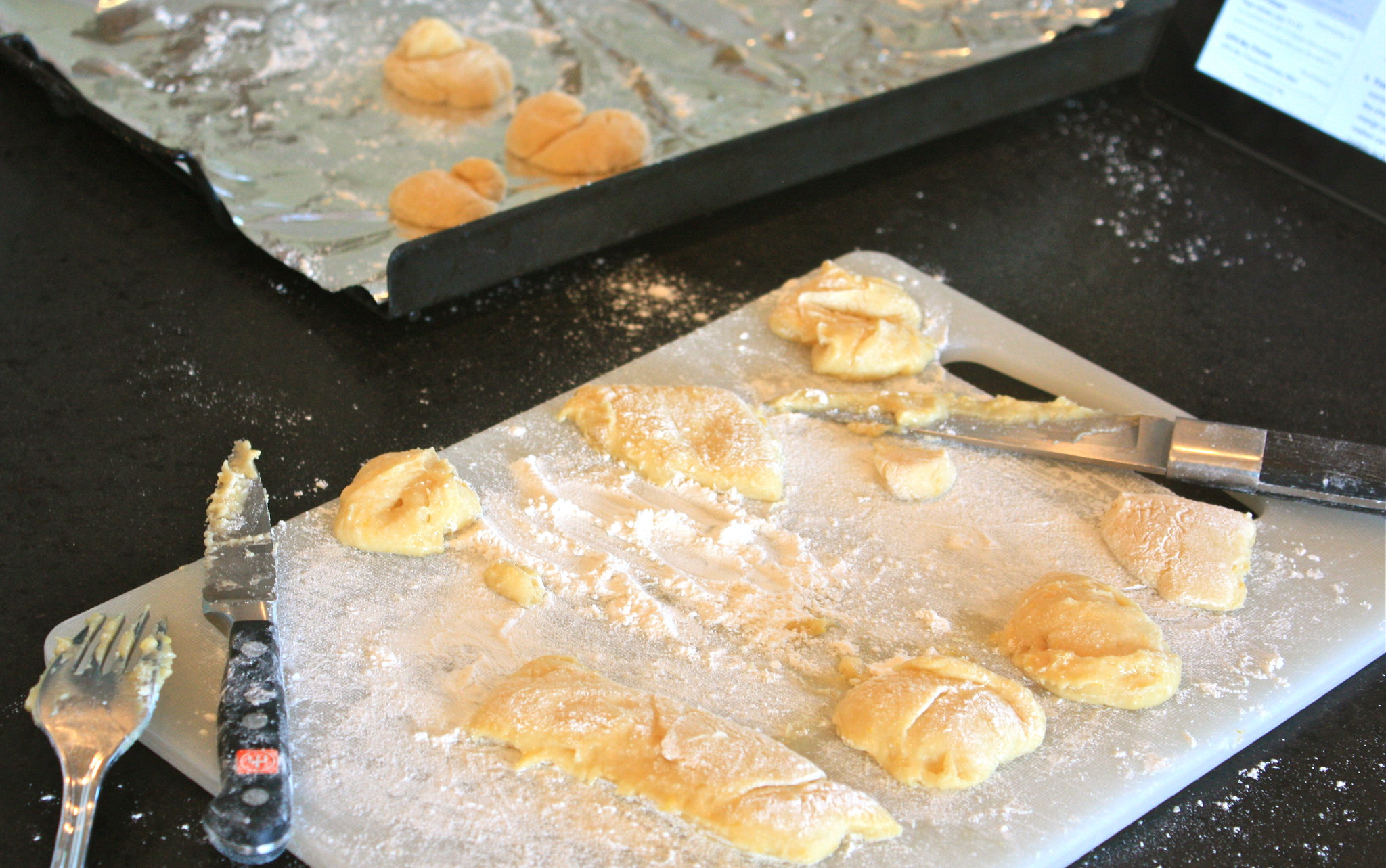 We almost gave up (after nearly giving up multiple other times simply out of fatigue), but looking at all the wee legs Rachel had piped out so painstakingly was killing me, so I did a quick bout of googling and found another recipe to try – we promised ourselves that this would be our last attempt, and then we would consider it a wash. 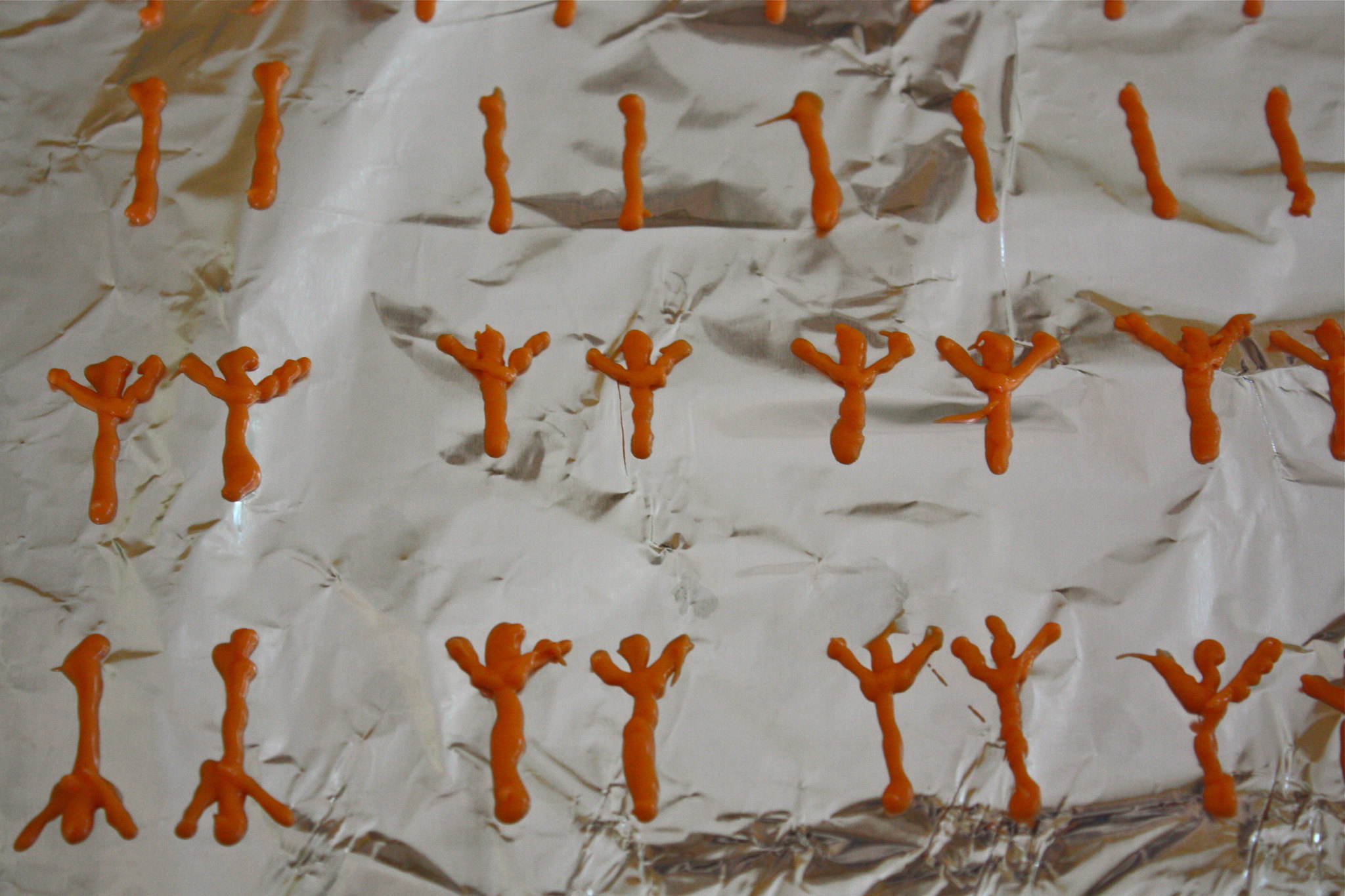 The recipe we used started with honey (we subbed agave), orange zest, and vanilla, and based solely on the smell of the batter we figured worst case scenario the cookies would taste good, at least! 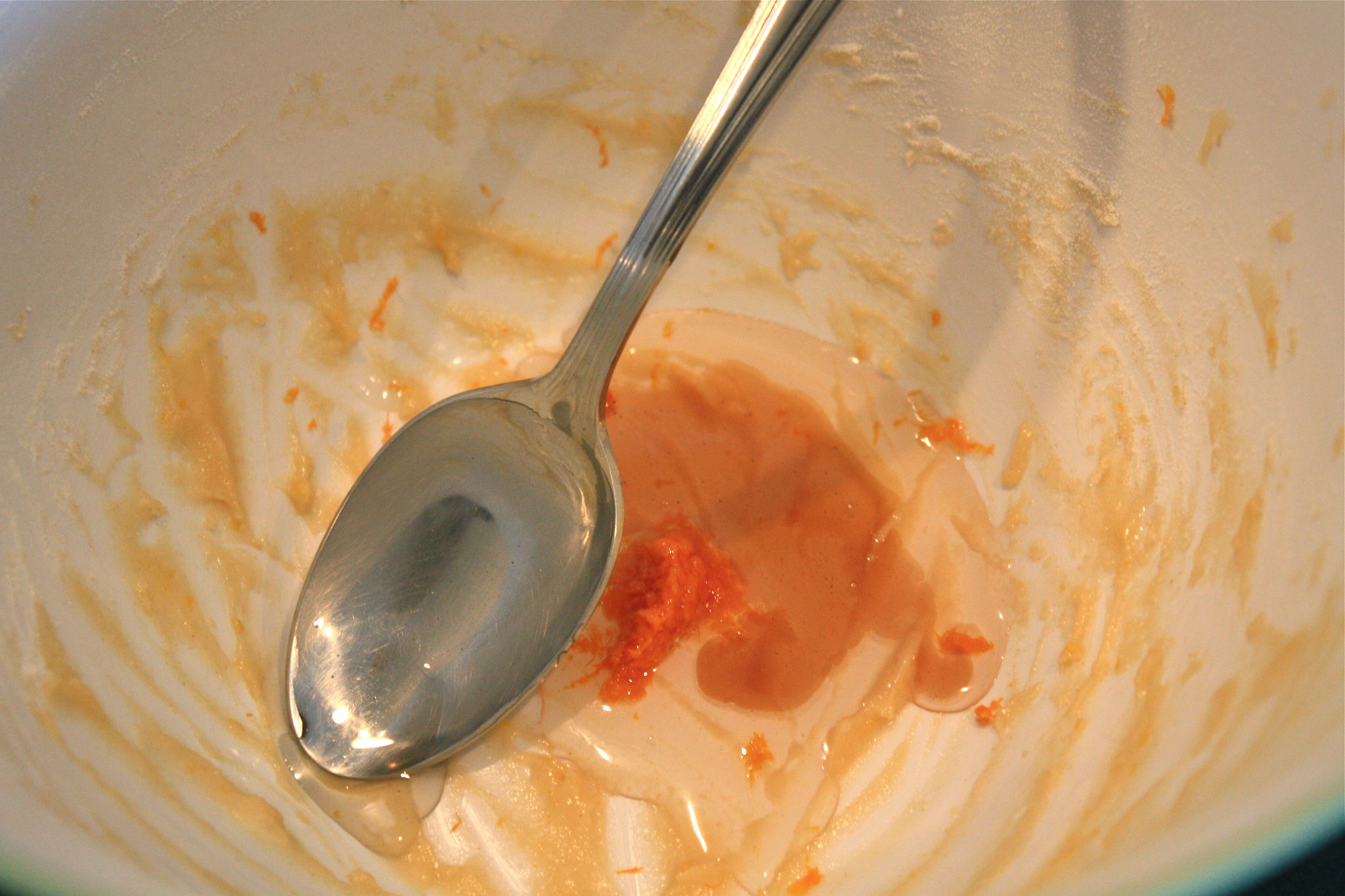 Plus, the dough didn't require any chilling, which was essential since it was 7pm and we hadn't even started the family dinner prep because Rachel and I were bogarting the kitchen with our endless baking fiasco.  We slapped together some chicks and lambs as quickly as we could: 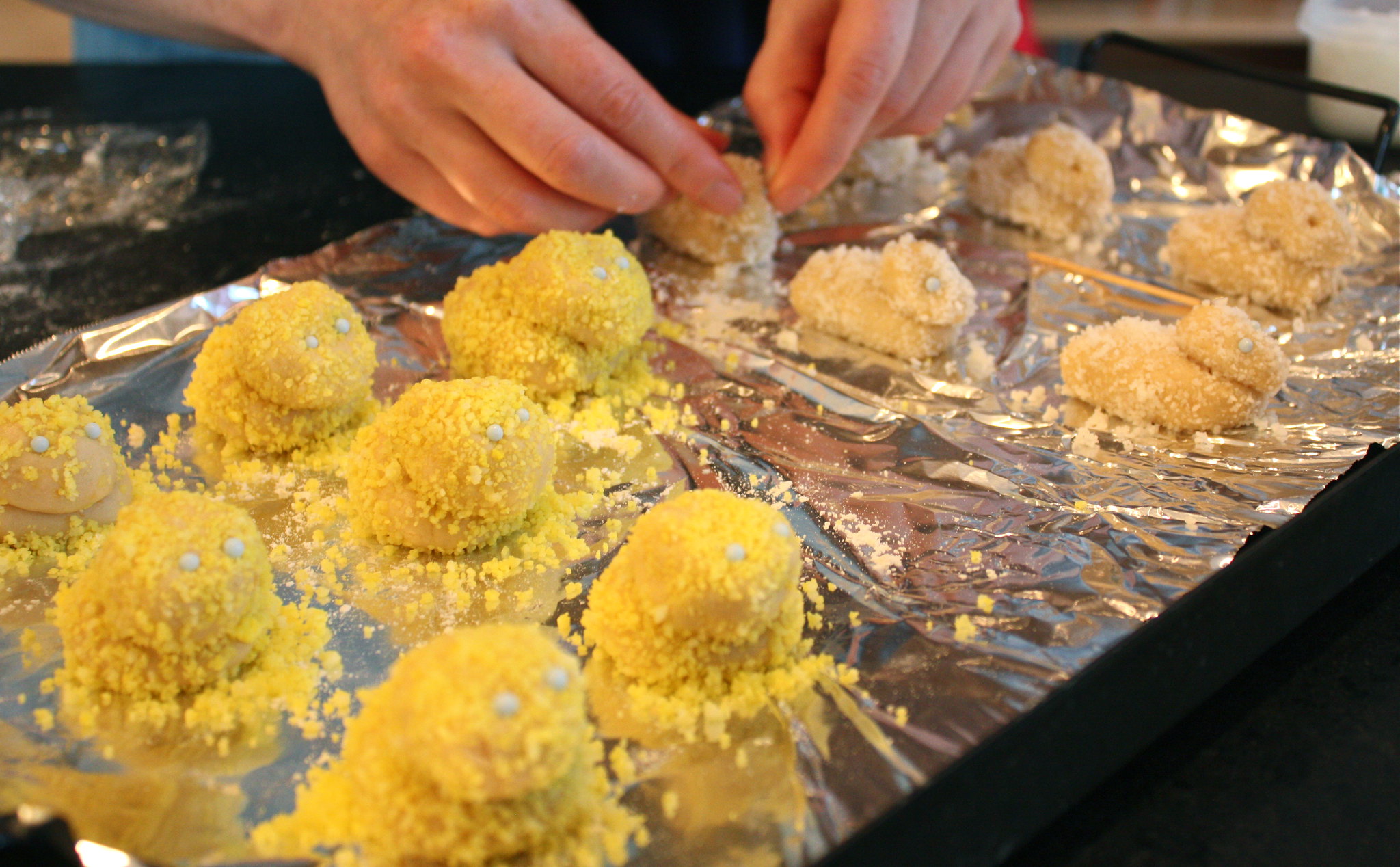 And although they spread a bit in the oven, we decided to press on: 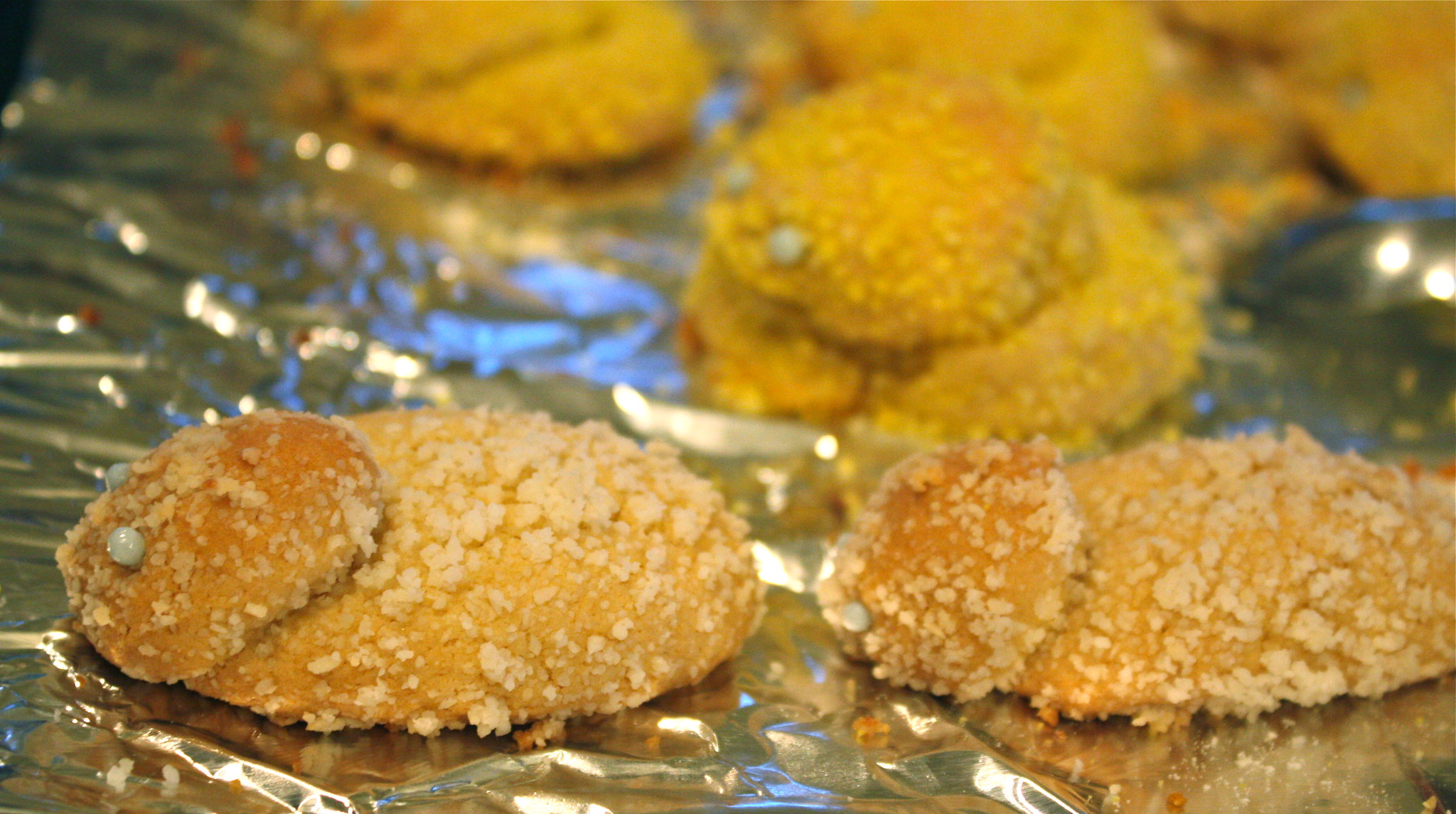 And lo, despite our skepticism and fatigue, gluing on the legs and beaks and ears paid off!  They looked cute but wonky in the evening light, through exhausted eyes, but in the morning, with a little dressing of eggs, they really shined and we were glad we'd kept trying: 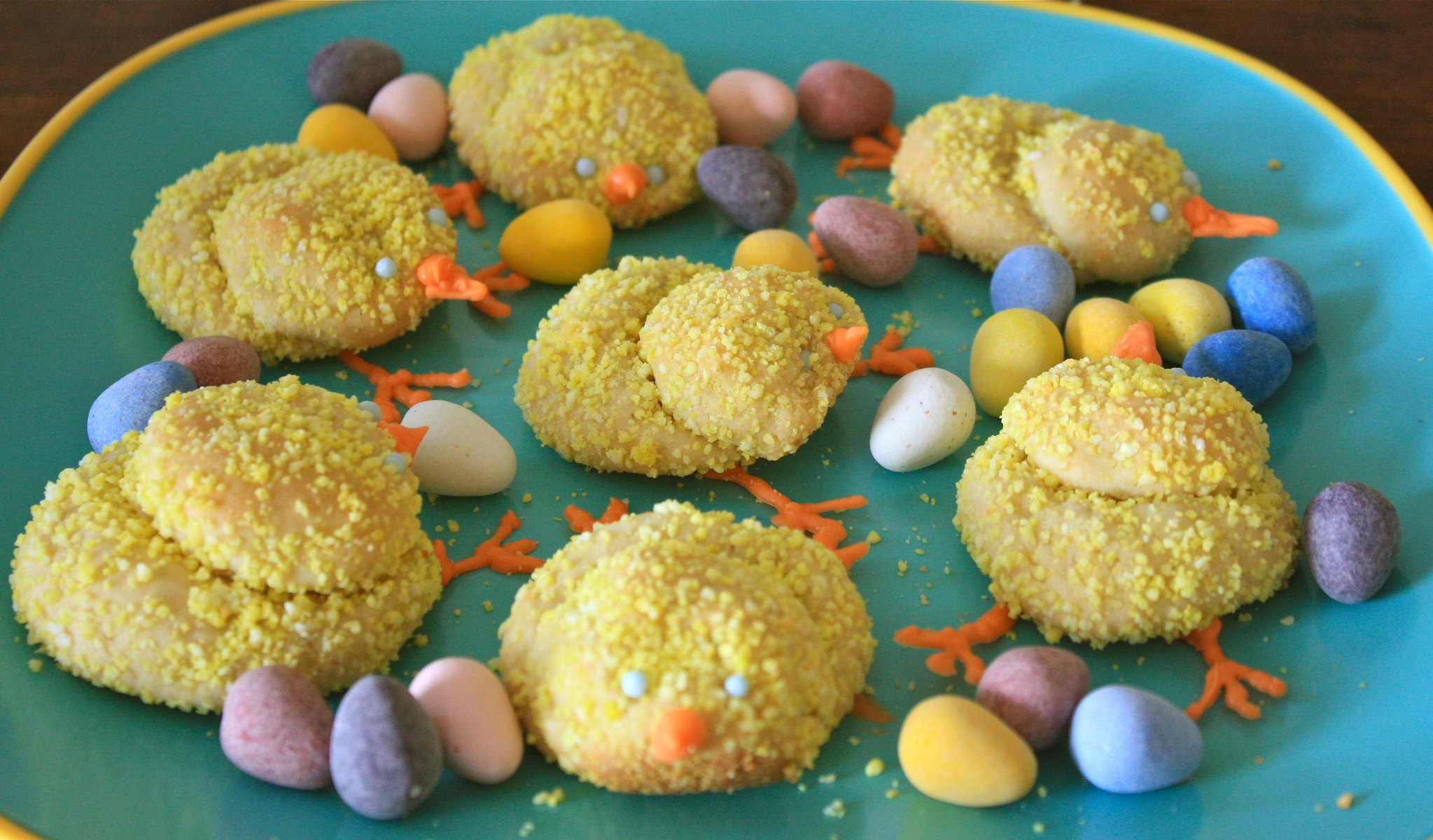 And the lambs were pretty cute too!  A little doglike, but still pretty darned adorable: 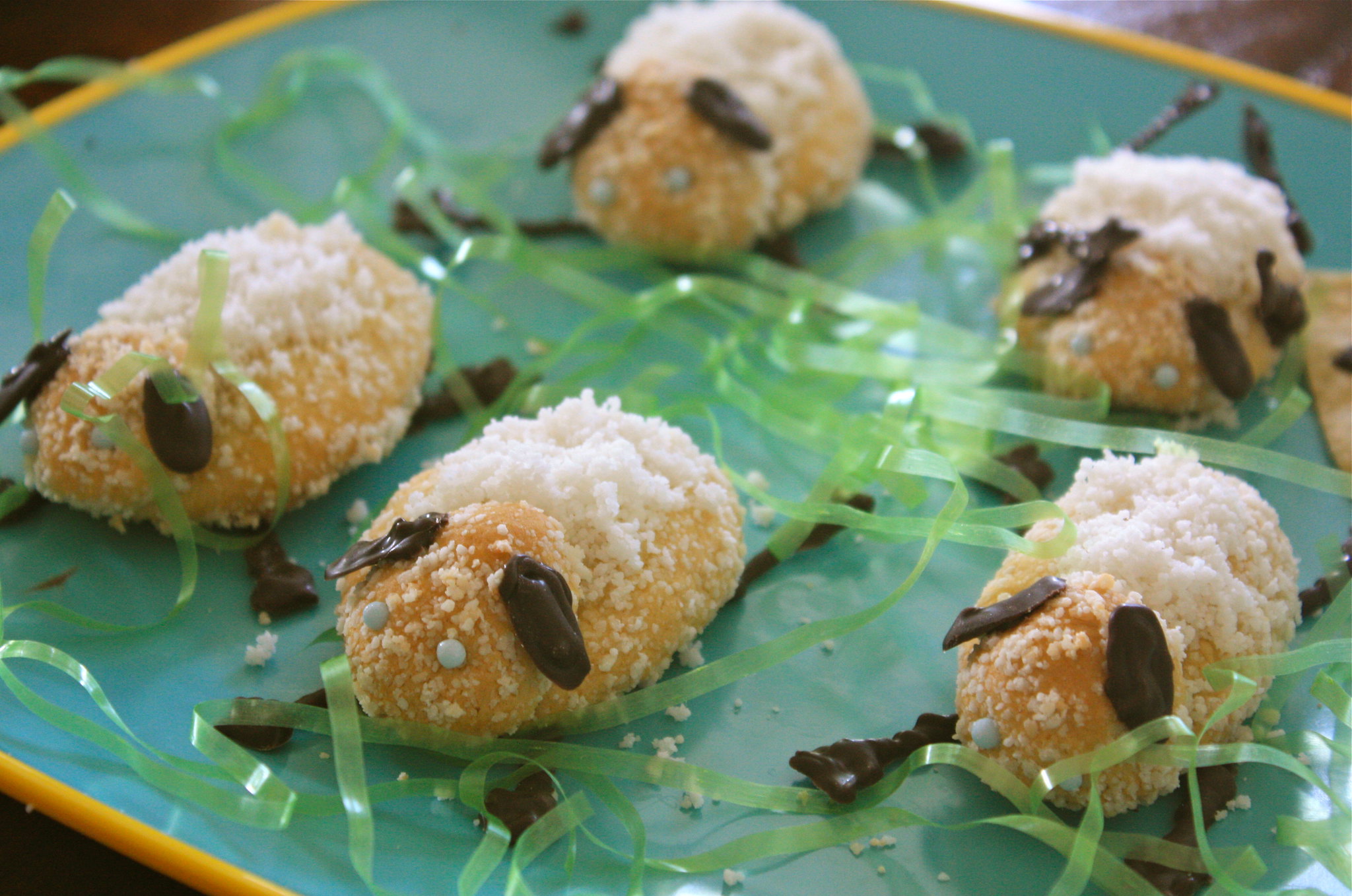 I'm especially partial to this little guy, who looks to me like he's swimming the butterfly while also baaaaaaing (thanks to my brother's helpful dialogue bubble on a chip): 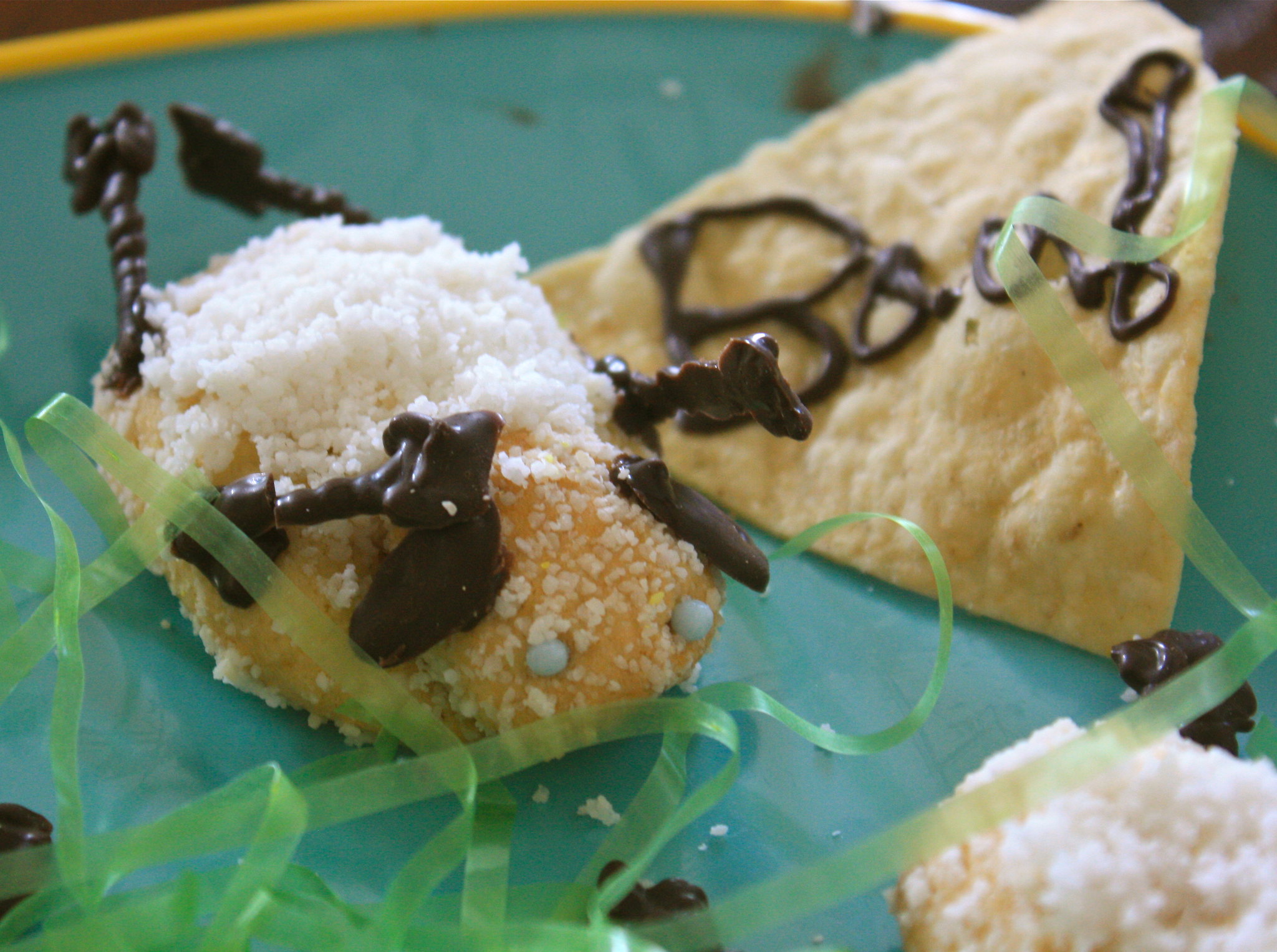 All in all, it was a much more involved project than we'd anticipated, but we saw it through, did a bit of improvising, and were happy with the silly results.  We did agree, though, once the cookies were all done (and my brother had eaten one and confirmed that they were tasty), to leave it there.  In fact, I believe our exact words, as we looked each other in the crazy eyes over the kitchen island, were "let's never do this again."

And we never will.  But if you want to, links are provided.  I for one am partial to the easy, frozen-dough project, but if you fancy a challenge I suggest using the original chick recipe for basic inspiration and using the secondary dough recipe for actual results.