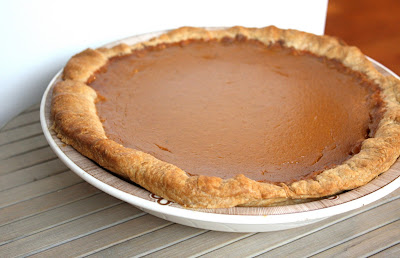 I've decided I finally know you guys well enough to let you in on the big family secret: Great-Grandmother's Pumpkin Pie.

Don't take this lightly, now.  I made this pie every year for my friends at college, and every year the list of pie requests grew; I made no fewer than 10 pies my senior year.  And when we graduated, after much coercion, I agreed to give the recipe to my friend Brittany, but I swore her to secrecy.  And now I'm blowing the whole thing open by posting the recipe on the internet.  I'm taking a big risk for y'all. 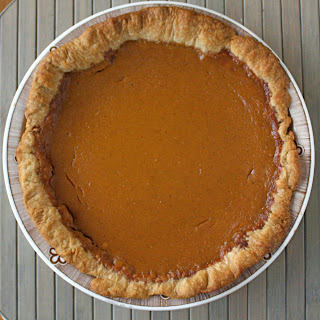 It's worth it, though.  As my mom says, the more this recipe gets out into the world, the fewer bland, overly sweet, dull pumpkin pies we have to eat.  And I'm all for that attitude.

Because seriously, this recipe is the best.  It's pretty much the only Pumpkin Pie I'll eat.  So, just in time for you to switch up your Thanksgiving menu plans (yeah, right!  Well there's always next year), I'm going to give you the recipe.  You're welcome. 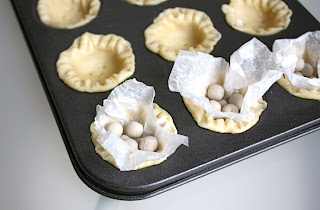 I made this pie last weekend for my poor, British bf, who loves it so much and who has an exam on Thanksgiving day, which means he couldn't come with me to San Francisco for the big family to-do.  (It also means we'll be apart for his birthday, so I made him an extra one and popped it in the freezer, and I'm praying it'll survive better than Google would have me believe.)

Now, this recipe makes a lot of custard, so I doubled the crust and prepared myself.  But we still ended up with a boatload of pie: 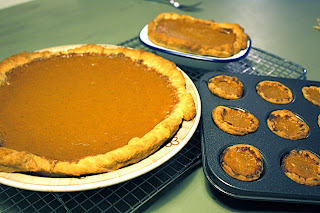 I wasn't sure we'd be able to eat it all, but by the time we made dinner my fears of wasted pie were already half-allayed: 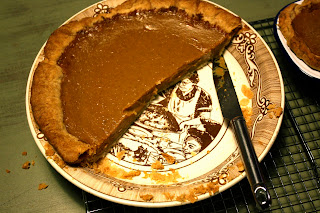 I brought the minis in to work, and I think they were pretty popular, despite my let-down of a pie crust overwhelming the deliciousness of the filling (argh), and the big-un was demolished the next morning by the bf.  Proof positive that the recipe is a winner!  I hope you like it as much as he does (and I do)! 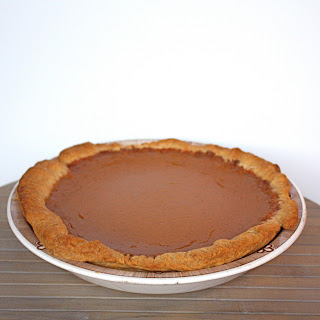 Pumpkin Pie
From Carolyn Anderson McIntyre
(makes enough filling for 1.5 pies, or 1 pie and a couple ramekins of custard)


Mix all ingredients except eggs, milk and brandy, then add lightly beaten eggs and milk.
Gently swirl in brandy, then pour into prepared 10 inch pie shell.
Bake at 425 (218 c) for 20 minutes, then turn down to 350 (176 c) for another 25 minutes or until custard is set.
Serve with freshly whipped cream with just a touch of vanilla and a sprinkle of sugar.


UPDATE!  My friend Stacy pointed out that her pie took forever to cook.  This happens sometimes.  In fact, this past Thanksgiving I was anxiously hovering by the oven for waaaaay longer than planned.  Basically, the baking times are an estimate.  It'll all depend on how deep your pie dish is, how hot your oven runs, etc.  The most reliable test is the jiggle test: the pie should jiggle a bit, just in the very center, but in no way should it be too liquidy or it isn't cooked yet.  Hope that helps!
Posted by Anne at 16:24