A not-so-short story about shortbread. 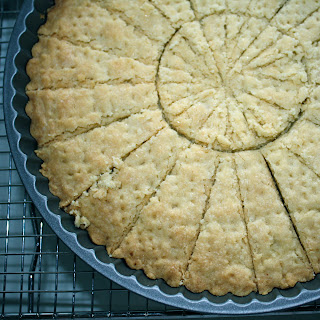 You may sometimes wonder, as does my mother, who eats all this stuff I bake?  Well, for a while it was my classmates I depended on to make sure we wasted not, but then classes became fewer and farther between.  And other people started bringing snacks (usurpers!), and I didn’t want them to think I was trying to steal their thunders.  So when the bf started working full time I was pleased to be able to ply him with tupperwares full of brownies and coffee cake and cookies.
And apparently his officemates were pleased too (although the boss is a bit cranky that people are starting to bring so many snacks in, for some reason…), so much so that the bf was able to finagle a few pence out of each of them to cover supplies.  Which was fab, since there are a lot of them there and I was finding myself baking larger and larger batches all of a sudden. 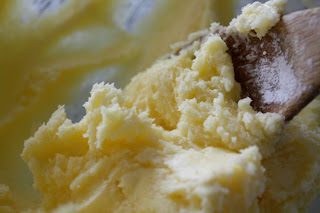 But with this financial gesture came requests.  Now, I don’t mind requests, and this particular one– shortbread– didn’t seem too much to ask.  After all, I made shortbread back in middle school, so how hard could it be to replicate it again now? 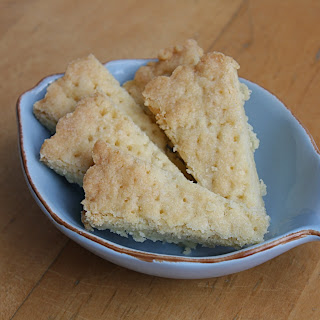 Very hard.  Well, to be fair, it wasn’t the shortbread that was so hard, but rather this recipe from SK, which made me cry and pull out my hair because I followed it exactly and it still came out in crumbs!

It was traumatic.  Mostly because it was late at night and I’d spent hours on this damn recipe and I was exhausted and just wanted to blow the office away the next morning, but instead I did dishes and moped, and they went hungry. 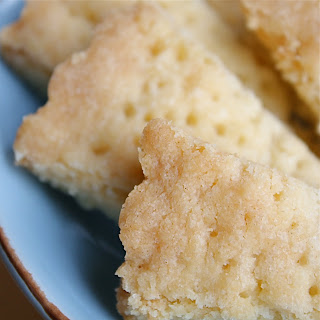 But I rallied eventually, and pulled out my trusty Joy of Cooking, and found a simpler recipe.  And I hesitantly threw the few ingredients together, trying not to hope too much for fear of falling hard.  And it smelled amazing in the oven.  And it looked good when it came out.  And I sliced it carefully and then tried not to touch it and just let it cool completely…

And it came out great!  It held together, it tasted good, and it cut up into lovely little wedges with scalloped edges.  Score another for Joy of Cooking!* 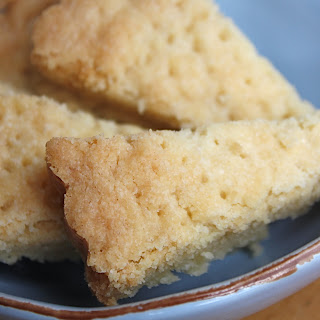 Scotch Shortbread
from Joy of Cooking
Preheat oven to 300F/150C.
In a large bowl, beat together:
3/4 cup softened unsalted butter
1/4 cup powdered sugar
1/4 cup granulated sugar
1/4 tsp salt
Stir in:
1 1/2 cups flour
Lightly knead until blended, then press dough into the bottom of an ungreased 8x8" baking pan or a shortbread mold, or a loose-based tart tin.  Pierce the dough all over with a fork to make a decorative pattern.
If desired, sprinkle with:
1-2 tsp sugar
Bake until shortbread is barely browned, darker at the edges, 45-50 minutes.  Cut while still warm, then cool in the pan on a rack.


*I’m not trying to hate on SK, but frequently their recipes cause me emotional pain.  Maybe I’m just not practiced enough, or I’m not the type of cook that pays enough attention, but when it comes to baked goods, I seem to be better off with Joy or Allrecipes…  Not that it’ll stop me trying!
Posted by Anne at 04:18