Snickerdoodles in our new flat 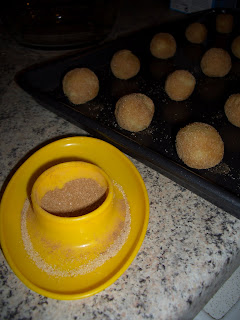 We moved into our new flat over 6 weeks ago, but the new, working replacement for our broken oven only arrived last week. So I'm sure you can imagine how much I'd been dying to bake, and the fact that I was denied only made me fantasize harder about tarts and pies and cookies and cakes.

So when the new oven was installed, I immediately started thinking about what would be my christening baked good. I settled on Snickerdoodles, because the cookies here all seem a little too sweet for my taste, and i just wanted something cinnamon-y and soft and subtle, without chocolate (I know, blasphemy).

First I had to find a recipe. Because the measurements are so different here, I try to find recipes in British first, but after an hour of searching I came up short. So I just figured I'd do the conversions. This was more difficult than previously imagined, because with ingredients like butter I had to convert from volume (cups) to weight (grams), which doesn't really work in a straightforward way. Lucky for me, though, the internet came to my rescue with a site dedicated solely to converting the many measurements of butter! God, I love the worldwide web sometimes. (FYI, a cup of butter, besides being a boatload of butter, is about 225 grams.)

So, conversions in hand, I headed for the kitchen, only to find that the recipe I'd found online, which claimed to make a dozen cookies, actually made 72! Yes, I counted, but come on! I had to. So it was a longer process than I'd intended, made even longer by the fact that it was also my dish day, but the end result was worth it all: yummy scrummy snickerdoodles with just the right amount of chewiness and just a little kick of spice from the cinnamon. And they don't look half bad either! 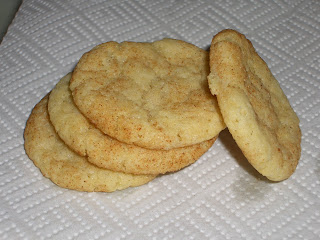 And now, a few other pics I couldn't fit in elsewhere: 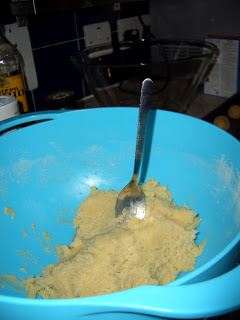 Three dozen cookies later, there was still a ton of dough! 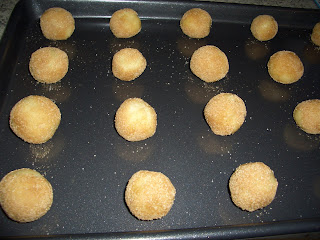 Pretty maids all in a row. 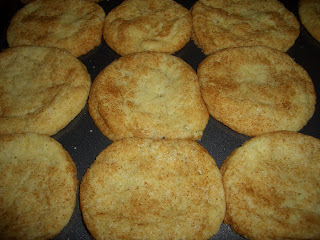 P.S. The recipe, courtesy of cooks.com: