Pin It Baking over here can be trying. Not only are the conversions a bitch (my recipes now have temps in both Fahrenheit and Celsius, and ingredients in cups and grams), and the ovens electric and therefore highly varied, but there's also the matter of being a poor student.

Point the first: poor. Meaning I don't have the money for such indulgences as a Kitchenaid mixer, or even a Cuisinart like my mom has at home (Hi Cuisinart, baby, I miss you!), or even such small luxuries as different sizes of pan/sheet/dish in which to bake.


Point the second: student. Which not only reiterates the poverty, but also means I'm here for a limited time, which makes any investment I could feasibly make seem like a stupid waste of money, since I can take very little back with me across the Atlantic.

So why do I keep trying? Because baking makes me happy.
I mean, it stresses me out, and makes me face my ridiculously understocked kitchen (especially because we only moved in 2 months ago and my boyfriend's not exactly leaping to split the cost of muffin trays), and forces me to do far more dishes than I'd like, but underneath all that it really makes me happy.

So it was with determination to use what I have that I set out to bake this afternoon. I'd gone to the store and bought the things I needed to make these delicious looking graham crackers, with this equally yummy looking pound cake as a backup. I bought everything on the list, only to come home and realize that the cookies are practically impossible without some sort of electronic device, as the butter is incorporated frozen (gah), and the pound cake requires the eggs to be whipped (not only do we not have electric egg beaters, but we don't even have a whisk). GAH.

So after moaning and cranking for 30 minutes while I scoured the internet for a delicious but easy cookie recipe that would use the honey we'd bought for the grahams, I finally decided, nudged by my boyfriend, to just do a normal pound cake.

Of course, the recipe I found was for lemon pound cake. And we didn't have any lemon extract. But I went with it anyway, thinking I'd just figure it out along the way. And halfway through copying out the recipe, I discovered it called for baking powder, and we had only baking soda. Sigh.

But I found this extremely helpful web page, which gives a substitution for baking powder using baking soda and cream of tartar, which, oddly enough, we did have! So on I pushed, bravely subbing this for that, and butter for fat, and other such rhyming. 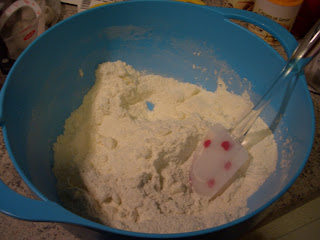 I was concerned I might have incorrectly converted the butter at first; you can barely see it! 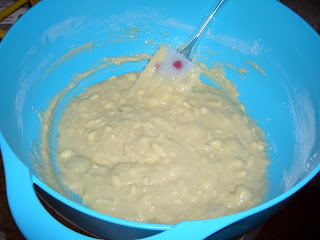 I'm notoriously bad at getting the lumps out by hand, not that it affects the flavor.

Until I came to the lemon. We did have a fresh lemon, but I was a little concerned it might not be enough to flavor a whole pound cake. So, in a frenzy of Fall-obsessed nostalgia, I threw in a handful of cinnamon instead, and then poured the batter into a buttered and floured 9-inch square roasting pan (of course, we're fresh out of 9x4's). 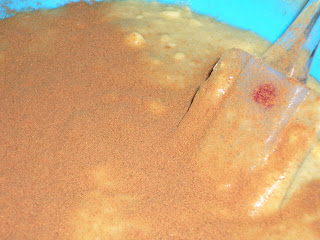 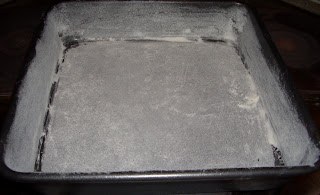 A beautifully buttered/floured pan, if I do say so myself. 30 minutes later, the tester (a strange, cheap, serrated knife from the BF's student-flat) came out clean, and my Frankencake didn't look so bad after all! 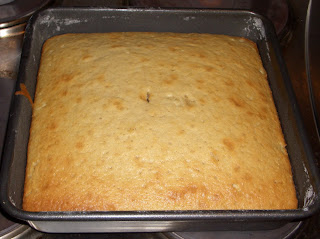 The true test, though, of course, was in the tasting. According to my boyfriend, the result was "buttery cakey goodness," and I must say I agree. The top was a bit crispy, the center was moist and heavy, like pound cake should be, and the hint of cinnamon (I'll probably add a bit more next time) added the bit of sweetness we needed. In all, an accidental success!

My recipe, adapted from this one at allrecipes.com:

Preheat oven to 175 degrees C (about 350 F), and butter whatever you've got! (9x4 is best, but I used 9x9 and it was delish.)
Mix flour, baking powder, sugar, and salt in a large mixing bowl.
Cut in butter.
Break egg into a measuring cup, then add milk until the liquid reaches the 1 cup line. Beat and add to mixing bowl.
Add vanilla and cinnamon, and blend well.
Pour batter into pan and bake for 30 minutes, or until a wonky old knife comes out clean!
Posted by Anne at 11:52