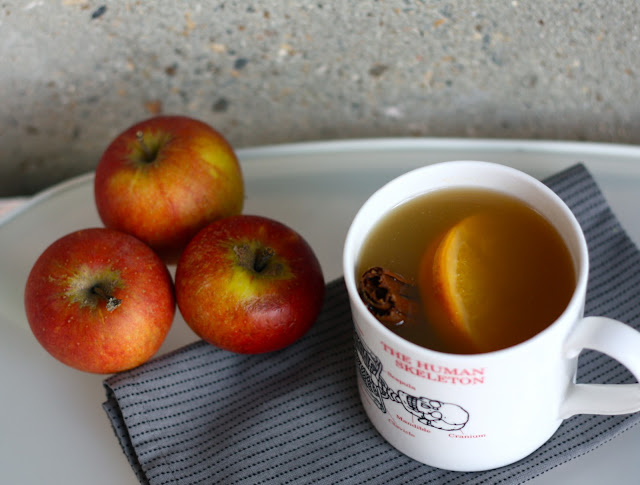 Back when I first moved to London, one of the things I missed most about the states was hot apple cider.  The fall snap in the air that first year hit my nostalgia buttons hard, and I found myself aching to crunch through an autumn wonderland, breath clouding, hands wrapped around a hot cup of steaming apple cider.  But alas, I was disappointed again and again – even Starbucks didn't have it, and there was nothing resembling cider (to mull myself) in the shops.  The closest thing I found was something called mulled apple cider at Covent Garden, but one sip of the revolting alcoholic brew dashed my hopes against the cobblestones and shattered them into a million shards of sad.

All that fall and winter I had to content myself with coffee, which, luckily, is one of my favorite things.  But it still didn't hit the spot.  I guzzled the real stuff on brief and wonderful trips home, and resigned myself to a life without sweet, cinnamony comfort. 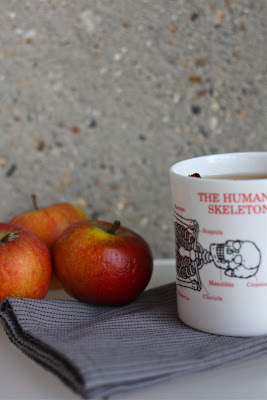 The second time around, when I moved back again in 2009, I was thrilled to stumble upon a sort-of solution: bottled mulled apple juice.  It wasn't cider, per se, but it was a deeply-enough flavored apple juice, and spiced enough, to serve as a ready substitute.  And best of all, it required no work besides pouring it into a mug and sticking the mug in the microwave.  I was stoked.

But alas, in November of this year, when I started getting serious autumn nostalgia pangs and went to my local Waitrose to find some bottled comfort, I was again disappointed – they'd stopped stocking it!  I sighed a heavy sigh and turned from the shelf, but the BF was less defeated.  He reached around me and grabbed a carton of 'cloudy apple juice.'  "We have to at least try," he said, his mouth set in a hard line. 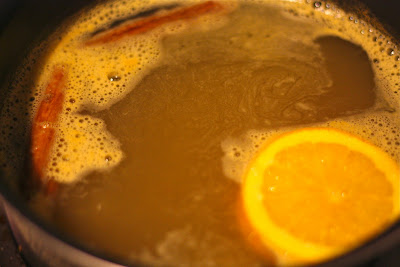 It's possible I've never loved him more.  And so, when we got home that night, I hastily looked up a recipe for mulled cider, tweaked it a bit to make it instantly accessible despite my imperfectly stocked kitchen, and got to mulling.


And you know what?  It wasn't half bad!  I think what my previous attempts (which have been unsuccessful enough to mean I've never mentioned them here) were lacking was the orange, which added a nice tang and a level of depth to the cider.  Which wasn't cider, technically... but it served the purpose: filling the BF and me with warm comforting fall-iness to help us face the chill outside. 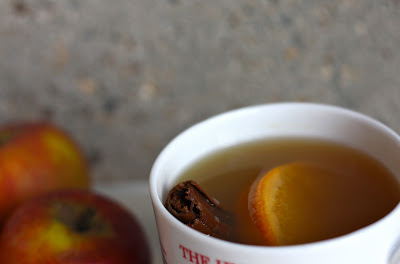 
Pour carton of cider (I think this one was about 1/2 gallon, or a little less) into a pot and place over medium heat on the stove.

Place cheesecloth/infuser in cider, along with:
3 cinnamon sticks
a few slices of orange.

Bring to a boil and then turn heat down a touch, simmering for 20-30 minutes.  Remove spice bag/infuser and cinnamon sticks from cider.

Serve in a mug, garnished with a cinnamon stick and a slice of orange. 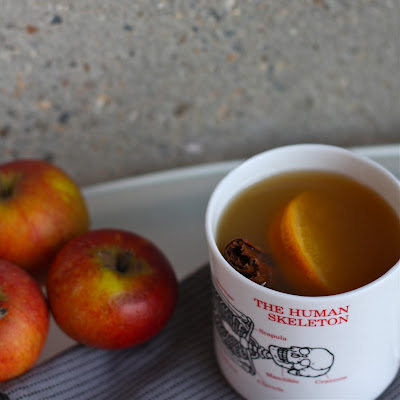