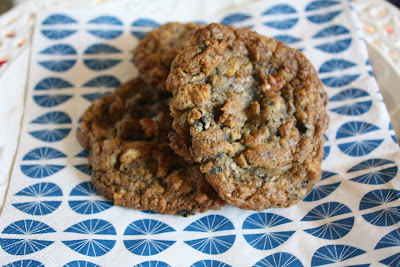 Okay, so I know I already waxed lyrical about the wonders of the Momofuku method as a base for my favorite cookie ever, but I did also (finally) try the recipe as it's meant to be made: with all sorts of weird, shouldn't-that-be-savory things stuffed into it.  And I wanted to share my experience.

A couple of weeks ago, the bf's brother came to stay with us on his way to a year abroad in China, and I thought it might be nice to give him and his friend a good old American cookie send-off.  I wanted to make a batch of my chocolate cherry cookies, but I also wanted to try the real Compost Cookies of lore.  So I made the dough up until the additions bit, split it in half, and did one batch of choc-cherry and one with potato chips, pretzels, and chocolate chunks.  You can see the bits here: 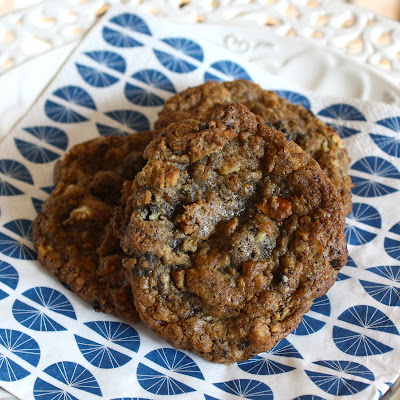 In both batches, I added some coffee grounds, because most of the reviews of this cookies said that the coffee grounds gave them a depth of flavor that set them apart, and I figured that couldn't be a bad thing, right?

And it wasn't bad... as such.  The coffee was a bit odd with the cherries, and to be honest there is such a thing as messing too much with a good recipe.  But the other batch, with the chips and pretzels and such, definitely benefited from the grounds.  Those cookies... well, they were certainly unexpected.  They weren't nearly as popular with the boys as the choc-cherries, but then nothing ever is so we can't really judge them on that.  For me, the flavor combo took some getting used to.  It wasn't not tasty, but it also wasn't the kind of thing you want to eat more than one of at a time.

I think really it's just that this cookie is kind of intense.  It's dark, and deep, and rich, and more of an experience than your average cookie.  It's a commitment.  I don't know how else to explain it.  I doubt I'll be making them again, mostly because all that chip-crunching and pretzel bashing seemed like a lot of effort for a cookie, but the bf and I did eat all of them in the days following the boys' departure, and we did feel bereft when they were gone (the cookies, not the boys)... so maybe they're an acquired taste.

But I don't need to be acquiring any more taste for sweet, unhealthy things.  I've got plenty of that already!  If you want the recipe as it's meant to be made (rather than the one with cherries and oats that I posted earlier), it's below.  If you make it, do let me know what your reaction is to it – inquiring minds want to know! 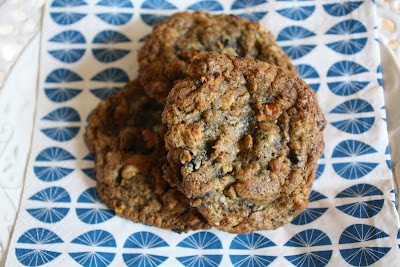 Momofuku Compost Cookies:
adapted a bit from The Amateur Gourmet
In the bowl of a stand mixer, cream until fluffy:
1 c (225g) unsalted butter, softened
1 c sugar
3/4 c brown sugar
Add, mixing on low speed until combined:
2 eggs
1 tsp vanilla
Turn mixer to med-high speed and set a timer for ten minutes.  Walk away. Update your Facebook status or put in a load of laundry .
When the timer goes off, turn the mixer off, then add in and mix on low speed, just until incorporated:
1 3/4 c flour
2 tsp salt
2 tsp baking powder
1 tsp baking soda
On low speed again, mix in:
1 1/2 c baking ingredients (I used chocolate chips)     1 1/2 c crushed snack foods (I used chips and pretzels)
1/4 c used coffee grounds (mine weren't used, and they were a bit too strong)
Portion with a cookie scoop or two tablespoons onto parchment-lined cookies sheets, 2" apart, cover with cling film, and chill at least one hour (I put my dough in the fridge and kept it there for a week, baking small batches all along, and it worked fabulously).
When you're ready to bake, set the oven to 400F/200C.  Bake, one tray at a time, until browned at the edges, with the golden color moving toward the center, and slightly cracked on top, 8-11 minutes.  Let cool completely on sheet before eating.
Posted by Anne at 08:36