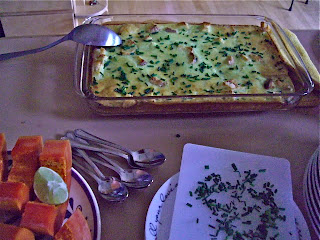 So, back in April, when Easter actually occurred, I was at home in San Francisco.  I had the baking bug real bad, and so I begged my mom to let me take care of the main dish for breakfast, as well provide the something sweet: a newfangled invention I’d just discovered called Monkey Bread, which basically means cinnamon-sugar-butter-biscuitiness.  Trust.  OMG.

It starts with chunks of biscuit dough, shaken in a ziploc with cinnamon sugar and piled in a pan: 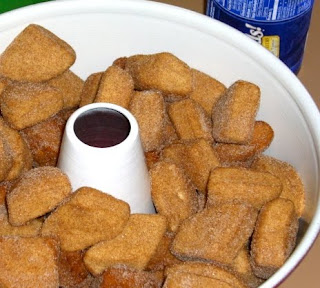 Over which is poured hot melted butter: 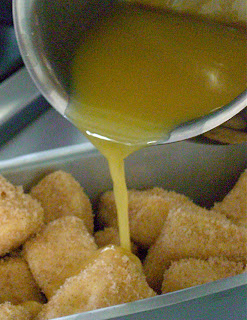 And then it's baked until it has a delicious, sticky, caramelized crust: 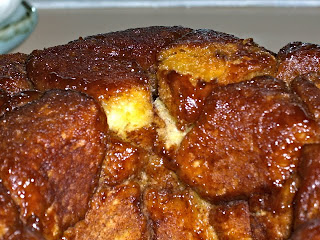 And a crunchy cinnamon-sugar top: 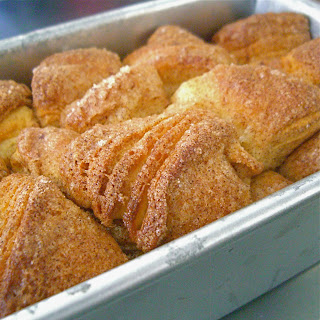 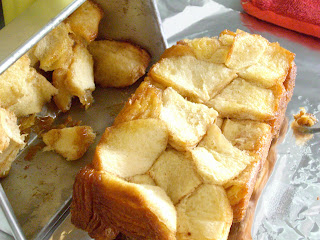 And, should you have any trouble with old, non-nonstick pans, a little cream cheese icing never hurt anybody (besides arteries, but we all know they're just frenemies anyway): 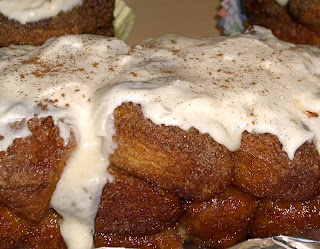 Oh, hi, you're still there!  Sorry, I got a bit distracted by the memories.  Droooooooool...

Now, obviously, it is no longer April.  It is no longer even May!  Where does the time go when you’re too busy baking chocolate chip cookies at 11pm and stringing together semi-coherent sentences on one cup of coffee?  Into the ether, I suppose.  But anyway, given my propensity for less-than-coherent sentences today (despite my second cup of coffee steaming on the table in front of me), I’ll just jump right into the recipes for what I would say (if I can remember that far back) was a wildly successful Easter brunch (and another 3 or 4 requests for monkey bread within the following week.  I think my 4 year old nephew will remember who I am now!). 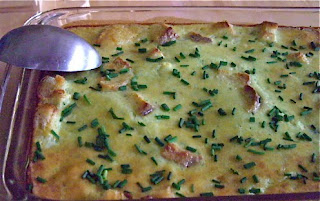 Recipes!
Three-Cheese Onion Strada, from BBC / Nigella Lawson:
This strada is another make-ahead, chill-overnight wonder.  I am SO converted to this easy way of life.  Oh, and by the way, it's delectable.
Slice up and layer in the bottom of your 9x13 baking dish:
One stale baguette
In a food processor (thanks for letting me borrow yours, mom!), pulse:
6 Spring Onions, roughly sliced
5 oz Mozzarella, roughly chopped
2 oz Parmesan, grated or shaved
3.5 oz Cheddar, broken into pieces (she does have a lot of ways of saying 'in small bits,' eh?)
Add, and then blend until smooth:
3.5 fl oz Sour Cream
6 Free-Range Eggs
Pour the mixture over the bread, cover with plastic wrap, and leave in the fridge overnight.  The next morning, pull it out, preheat the oven to 360F/180C, and pop that sucker in for 30 minutes, or until completely cooked through.  Garnish with chopped chives if you like to be fancy-pants.
Monkey Bread of RIDICULOUSNESS, from Pioneer Woman / Pastor Ryan:


Preheat oven to 350F/175C.
Pop open and cut into quarters:
3 cans of Buttermilk Biscuits (if you happen to be blessed by a Trader Joe's in the vicinity, theirs are pretty much manna from heaven.  Otherwise Pilsbury are fine.)

In a big ziploc bag, combine:
1 cup Sugar
2-3 (or 4, or 5) tsp Cinnamon
Throw in the biscuit quarters and shake until coated.  Toss nuggets of deliciousness into a pan (NONSTICK tube/bundt make the prettiest end result).
Over med-high heat, melt together:
1/2 cup Brown Sugar
2 sticks (225 grams) Butter
When the two have become one, pour the liquid gold over the nuggets of deliciousness and stick the pan in the oven for 30-40 minutes, until top is golden brown (NOM).
Try to allow the finished product to cool for 10-15 minutes before serving.  Eat with your hands like ANIMALS because this is that scrum-diddly-umptious.  Fo sho.
Posted by Anne at 10:38