Be careful what you wish for, or: how I managed to make a dish-/time-saving instrument take forever and use a million dishes. 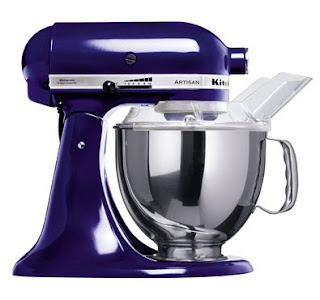 Aaaaaaaaaaaaaaaaaaaaahhhhhhhhhhhhhh! (that was a choir of angels, FYI)
Yes, folks, I'm afraid I must stop whining (or cut back, at least), because today my lovely and CRAZY boyfriend bought me a kitchenaid mixer!!!
Today, we went to Divertimenti, one of our fave kitchen stores, so that I could finally use my gift certificate that the bf bought me a year ago.  I had my heart set on a tube pan, so I could make angel food cake (because I had conveniently forgotten that I needed an electric mixer to whip the egg whites, or maybe I was just planning on buying a crappy hand mixer... yeah I think that was the plan), and I found something called a Kugelhopf, which looked good enough and was surprisingly inexpensive.  That left me with some money on my card, so I also picked up a super awesome french press travel mug to help get me through the long nights of class.
And I was all set, as far as I was concerned.  And then the bf dropped the bomb: despite our agreement that we would NOT buy each other gifts for V-day (ok, so I broke it first, but I got him a little thing!), he had made up his mind to get me my heart's desire, a Kitchenaid Artisan Mixer.
Now, two things caused me to punch him in the arm:

1. We have a long and complicated history of him buying me expensive things and me punching him because I SPECIFICALLY TOLD HIM NOT TO AND I DON'T WANT PEOPLE TO THINK I'M A GOLD DIGGER ESPECIALLY HIS PARENTS.  But that's a story for another time.
2. More pressingly, I just posted a comment on Joy the Baker's post on how to make bread at home, bemoaning my status as a poor student with no Kitchenaid mixer!  AND I got a lot of clicks on my link because of it.  AND a lovely woman from New Mexico replied, explaining how to adapt the recipe for hand-kneading!  Thanks, bf, for helping me put my foot right into my mouth.
So yes, I have a beautiful new mixer.  And yes, I can make cookies and cakes in the pull of a lever (or so I'm told; stay tuned).  But I'm still going to make the bread by hand, gol-durnit!  Because I'm stubborn, sure, but also because I can't bear to let good advice go to waste.  And also because I've always wanted to try and my arms are getting flabby.  More on bread making when I actually get to it and post about it.
Now, just a brief description (mostly in pictures) of how the christening of my new mixer (I'm thinking of calling her Eliza, as in Bennett, for her sturdy beauty) went down.  Because you KNOW I had to try it TONIGHT.  I flipped open the Joy to the page full of can't-do-it-without-a-mixer recipes, and chose Sour Cream Cake, because I bought sour cream and hadn't used it yet.  Some things are simple.
The recipe, not sooooo much.
It began well, with beautifully creamed butter (right out of the fridge– sorry Eliza!) and sugar: 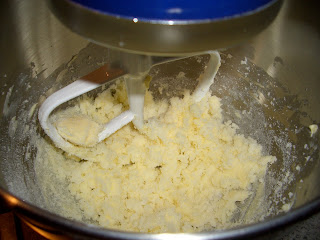 And when I added the egg yolks (after separating the eggs and removing the fetuses WITH EYES EWW WHY DO WE BUY ORGANIC?) and the flour mixture (yes, there was already another bowl involved, but don't worry I didn't let Irma tell me what to do– I DON'T SIFT!) and the sour cream and such, it all looked pretty hunky dory.  But then I needed the mixer bowl to whip the egg whites... So the sticky transfer began: 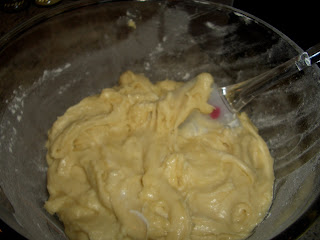 And THEN, after we washed the bowl (yes, bf helped) and attached the whisk, we discovered that 2 egg whites, however 'large,' do not create enough liquid for the whisk to immerse itself... which led to bf having to hold the bowl up under the whisk while it did its work: 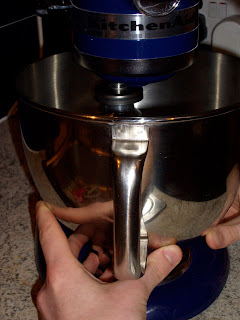 And then all that had to be done was folding (ugh, I suck at this part) the egg whites into the batter.  Which was tedious but fine.  And then we awkwardly managed to get it all into the new kugelhopf (fancypants bundty thing, as I call it), and pop it in the oven, and five minutes (and too many dishes for my taste) later, the whole flat smelled AMAZING.  Seriously, oh my god amazing.

And the result was perfect, if not perfectly even on top: 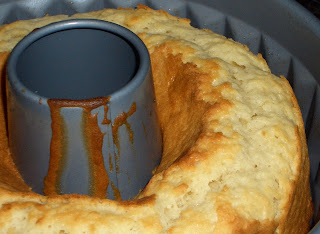 And maybe it wobbled a little when we flipped it over, but that sure as hell did NOT stop us from gobbling down way too much of this delicious, airy, rich cake and making ourselves feel yucky.  Because YUM: 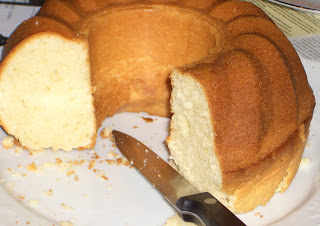 The Recipe:
Sour Cream Cake, from Joy of Cooking:
Preheat oven to 375F (190C).  Grease 2 round cake pans (unless you happen to have a badass new kugelhopf that you want to try out).
Whisk thoroughly in a bowl:
1 3/4 c sifted (HA) cake flour (I used all purpose and it was delish)
1 3/4 tsp bking powder
1/4 tsp baking soda
1/4 tsp salt
Beat in a large bowl until creamy:
5 Tbsp (70g) unsalted butter
Gradually add and beat until light, 3-5 mins:
1 c sugar
Beat in:
2 large egg yolks
1 tsp vanilla
Add the flour mixture to the butter mixture in 3 parts, alternating with:
1 c sour cream or plain yogurt
in 2 parts, beating until smooth.
Using clean beaters, beat in a medium bowl at med-high speed until stiff but not dry:
2 large egg whites
1/8 tsp cream of tartar
Fold 1/3 of the whites into the batter, then fold in the remaining whites.  Scrape the batter into the pans, spreading it evenly.
Bake until a toothpick inserted into the center comes out clean, about 25 minutes (35 in a kugelhopf).  Cool and remove the way you usually do with round cake pans, since I'm unwilling to type out the long advice column on p702.  Scarf.
KUGELHOPF.  I'm sorry, I just had to type it one more time...
(Random Note: I don't know what's happened to my spellcheck in blogger, but I can't find it, so I'm sorry if there are any typos in the last– and next– few posts.)
Posted by Anne at 16:50